Historic towns in a part of the country little visited by tourists.

Much fine mediaeval, Renaissance and Baroque architecture and art.

Led by an art historian who is also a native Hungarian.

While the magnificence of Budapest and the superb holdings of its museums now attract large numbers of visitors, the cultural riches of the rest of Hungary are still unjustly neglected.

Hungary was formed in the tenth century by horsemen from the Central Asian steppes. Emerging as a powerful and prosperous state at the end of the Middle Ages, it was the first country outside Italy to receive Renaissance architecture and to apply it with understanding. The subsequent Turkish conquest resulted in the elimination of nearly all political and cultural achievements, though impressive Romanesque and Gothic monuments remain, as well as tantalising fragments of great fifteenth-century Italianate palaces.

From the eighteenth century there was steady reconstruction as part of the Austrian empire, resulting in some magnificent Baroque and Classical buildings and large-scale decorative painting. In the nineteenth century the accelerating drive towards independence was accompanied by outstanding artistic and architectural creativity. This tour includes historic towns, churches, abbeys and country houses in the west and the north of the country.

Sopron. Fly at c. 11.30am from London Heathrow to Vienna. Drive through the Austrian province of Burgenland, which was part of Hungary until 1919, and across the border to Sopron, one of the best preserved and most picturesque towns in Hungary. Around a Fire Tower of mediaeval foundation and Baroque termination crowd dozens of ancient patrician houses, churches and synagogues. First of three nights in Győr.

Győr, Pápa, Pannonhalma. The spires and domes of the country town of Pápa can be seen from many miles away. Once an important ecclesiastical and administrative centre, it has a splendid late-Baroque church and a magnificent Esterházy palace. Győr has a very lovely and extensive historic centre with buildings of many periods, including a Romanesque-cum-Baroque cathedral with a 15th-century golden reliquary. Pannonhalma has a major Benedictine abbey situated on a hill with bold Neo-Classical tower, church, library and an art gallery. Overnight Győr.

Eszterháza, Sárvár, Sümeg. Eszterháza (Fertőd) is the most magnificent of Hungarian country houses; built in the 1770s, Joseph Haydn worked here every summer for thirty years. Episcopal patronage in the little town of Sümeg provided a beautiful 18th-century parish church with frescoes which are the masterpiece of Franz Anton Maulbertsch, the greatest of Austro-Hungarian Rococo painters. Sárvár has a pentagonal Renaissance fortress, with fine rooms of the 16th to 18th centuries. Final night in Győr.

Veszprém, Tihany, Székesfehérvár. The episcopal seat of Veszprém has a cluster of fine buildings crowning a ridge among the Bakony mountains and suave 18th-century edifices rise from remnants of the mediaeval citadel. Beautifully sited on a promontory protruding into Lake Balaton is the abbey of Tihany. Székesfehérvár, a former capital of Hungary, has picturesque streetscapes and fascinating Baroque and Neo-Classical architecture. Overnight Székesfehérvár.

Kecskemét. Kecskemét, the city of the Great Plain, is surrounded by vineyards and orchards, particularly of apricots. The centre is largely composed of fascinating turn-of-the-century architecture by Ödön Lechner and others. Continue to Eger, perhaps architecturally the finest 18th-century city in Hungary. First of three nights in Eger.

Eger, Noszvaj. Begin with a morning walk through Eger, including a visit to the massive Neo-Classical cathedral. Afternoon excursion to Noszvaj to visit the De la Motte Mansion, a country house with Rococo decoration. Overnight Eger.

Eger, Bélapátfalva. The splendid former university built 1765–85 has a Maulbertsch fresco in the chapel and a magnificent library with the ceiling painted by J.L. Kracker. Then on to the Baroque County Hall with outstanding wrought-iron gates, the Gothic Bishop’s Palace and 18th-century Archbishop’s Palace and finally the splendid Minorite church designed by K.I. Dientzenhofer. There is an afternoon excursion into the countryside to see the Romanesque Cistercian church at Bélapátfalva. Final night in Eger.

There is quite a lot of walking and some long coach journeys. This tour should not be attempted by anyone who has difficulty climbing stairs. Average distance by coach per day: 96 miles. 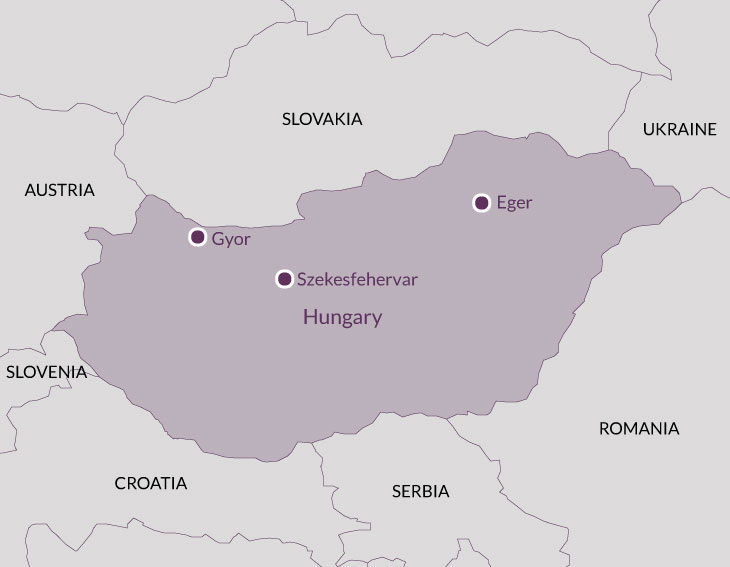 'One of the best MRT lecturers we have had.'

'The lecturer was erudite and articulate... we couldn’t have wished for more.'

'The tour leaders were superb – an excellent team which couldn't have been bettered.'