Martin Randall on his passion for prints

I know exactly where I bought my first print: Suckling & Co, a little shop in Cecil Court, an alley running between Charing Cross Road and St Martin’s Lane in London. George Suckling – long departed – specialised in engraved portraits, and I went there in search of an image of Lord Burghley, Elizabeth I’s chief minister, on whom (aged sixteen) I was writing an essay for a school history prize.

I didn’t win, but I suspect the legacy of that first purchase exceeds any benefit the prize might have brought. Prints became a passion, and I went on to form a collection – small and motley, scoured from the damp basements of backstreet antiquarian bookshops and minor and malodorous antique markets. My personal collection is a digression: the real story began twenty years after that first purchase when it dawned on me that we could use antique engravings and other sorts of original prints – etchings, lithographs, woodcuts – to illustrate the Martin Randall Travel publications.

The very first brochure had no illustrations except for a couple of images scanned from a seventeenth-century treatise on architecture I had been lent by a book-dealer friend. For the next edition, I agonised for months about what to do to leaven the text. We had no budget for professional photographs and reproduction rights, and my view was that amateur photographs (as an architectural historian manqué I had hundreds) would not adequately evoke the exceptional experiences we were trying to persuade you to buy.

I remember the moment of epiphany: I leapt out of bed and rootled in the lower regions of the wardrobe where my precious prints were stored. Sadly there were few relevant topographical views; the firm would have to start buying. In this start-up phase resources for doing so were slender. I remember looking longingly at an Edwardian etching of Sta Maria della Salute in Venice (at a shop attached to Syon House) and rejecting it because it was £16; our agreed maximum was £14, oddly. (Happy ending: it was still there a year later, I bought it, and it has done sterling service ever since.)

Unique is a word to treat with caution, but it can be used with confidence here. No other travel company illustrates its publications with original prints, and so our brochures acquired a distinctiveness which not only plays well with prospects and clients but is acknowledged as exemplary by professional designers and marketers. Prints are also apposite, showing places seen on a tour and, to varying degrees, being works of art themselves and historical sources in their own right. And prints are cheap for publication purposes: buy an out-of-copyright image and there is no owner or artist’s estate to pay for the right to reproduce it.

Our budget slowly increased but my parsimoniousness ebbed more slowly. For many years I bought only well below the market rate. In Vienna once I found a little engraving showing the interior of a hall in which we were to stage a major concert but the price tag of €120 ruled it out. But serendipity has a role in the life of all collectors: a few weeks later I found the same print in Portobello Road in the ‘all for £5’ box.

Wherever I travelled I hunted for print shops, from Boston to Belgrade, Stockholm to Seville, Cardiff to Kolkata, though eventually I came to the realisation that by far the best place for collectors is London. Sadly, the number of print shops has declined radically, even more precipitously than their counterparts dealing in second-hand books.

The hunt continues, but at a lesser rate – not least because we now have good coverage of many of our destinations. The tally is about 5,000 loose prints (single sheets) plus an uncountable number of engraved images in about 600 bound volumes. Among these are Edwardian travel books illustrated with well reproduced watercolours which have brought colour to our brochures in recent years. (It’s worth recording that we have never ‘broken’ a book – ripped out the prints and thrown away the carcass, a regrettably common practice in the antiques trade.)

There’s no palatable medicine to cure the collecting bug, especially when galvanised by a purpose. The big challenge each year, and the source of considerable stress, is to find front covers. These need to be strong images, pertinent subjects, upright (portrait) format (most views are landscape), with an area of sky – or of dark foreground – on which to place the logo and lettering.

A recent cover image was acquired from a shop in the aforementioned Cecil Court; a few print dealers remain here, perhaps the only street in central London which consists entirely of independent specialist shops of an antiquarian or artistic nature. That they survive must be thanks in large part to the policies of the landlord, not (I am told) because the rents are particularly uncommercial but because his office is prepared to cope with the idiosyncratic ways in which such businesses are run.

It is a neat coincidence that this enlightened landlord is the Marquess of Salisbury, a direct descendant of Lord Burghley, subject of that first acquisition. 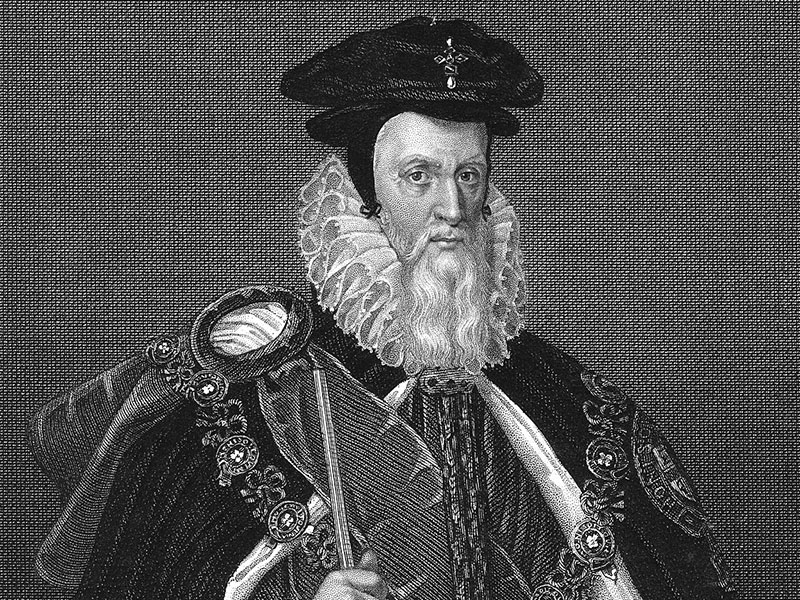