The Age of Bede - Anglo-Saxon Northumbria

Examines the remarkable efflorescence of culture and learning in Anglo-Saxon northern England.

For a few decades around AD 700, a handful of monasteries in Northumbria became beacons of culture and learning in a Britain that was largely tribal, warlike and unstable. Within a century Viking raiders extinguished these fragile flickers of civilisation, and destruction and division again ruled the land. England – as it can now be called – steadily recovered, and on the eve of the Norman Conquest had become one of the best-governed and most prosperous territories in Europe.

The tour visits some of the most significant Anglo-Saxon remains in the area – Jarrow and Monkwearmouth, the two-campus monastery to which Bede was given as a child oblate and where he became a monk; church architecture at Escomb and Hexham; and sites of powerful resonance – the royal court at Yeavering and Lindisfarne, now known as Holy Island.

The tour introduces a cast of remarkable men – Benedict Biscop, Aiden, Cuthbert, Wilfrid and Bede, characters of extraordinary tenacity, learning, piety and courage. One of the great intellectuals of the Middle Ages, the Venerable Bede (c. 673–735) wrote on science and the measurement of time and on languages and literature as well as compiling a work of inestimable value, The Ecclesiastical History of the English People.

Durham Cathedral is the last resting place of Cuthbert and Bede. In the opinion of some the finest Romanesque church in Europe, its massive size and defensibility express the often tenuous hold on the region by institutions representing  southern-based royal government.

Jarrow and Monkwearmouth. The tour begins with a lecture in the hotel in Durham (where all three nights are spent) at 1.30pm. The monasteries at Monkwearmouth and Jarrow, ten miles apart but one institution, were founded in 674 and 681 by Benedict Biscop, whose five journeys to Rome resulted in a unique network of international contacts and awareness of European artistry. Parts of the original chapels survive, with stained glass and stone carvings.

Yeavering, Holy Island. On the journey to Lindisfarne the tour visits Yeavering, evocative site of a royal settlement. The monastery on the little island of Lindisfarne (later ‘Holy Island’) was founded in AD 635 by an Irish monk from Iona, St. Aidan, and became an important centre for scholarship and missionary activity. A place of remarkable charm and tranquillity, there are Anglo-Saxon fragments, ruins of the Norman priory, and a castle, turned into a home by Edwin Lutyens.

Durham. All day is spent in and around Durham Cathedral, one of the greatest Romanesque churches in Europe and one of the most impressive of English cathedrals. Mighty towers rise above the encircling river Wear, while the interior cannot but move with its power and piety. The bulk of the building is little altered since the forty-year building campaign begun in 1093. There is the opportunity to attend Evensong or Evenprayer here.

Escomb, Hexham. The tiny Saxon church at Escomb was built c. AD 675, a rare survival. A lovely market town on a bluff above the Tyne, Hexham grew around a monastery founded in 671 by St Wilfrid. The magnificent medieval church is post-Conquest except for the crypt, the largest surviving expanse of Anglo-Saxon architecture in England. The coach sets down at Newcastle Central Railway station by 3.00pm.

Hotel accommodation; private coach throughout; breakfasts and two dinners with wine, water, coffee; all admissions; all tips; the services of the lecturer and tour manager.

The Radisson Blu Hotel, Durham is a modern hotel situated on the river and is about 15 minutes on foot from the town centre. Single rooms are doubles for sole use.

The tour involves a lot of walking, where coach access is restricted, and a lot of standing in churches and on site. Uneven ground and irregular paving are standard. A good level of fitness is essential. Unless you enjoy entirely unimpaired mobility, cope with everyday walking and stair-climbing without difficulty and are reliably sure-footed, this tour is not for you. Average distance by coach per day: 64 miles. 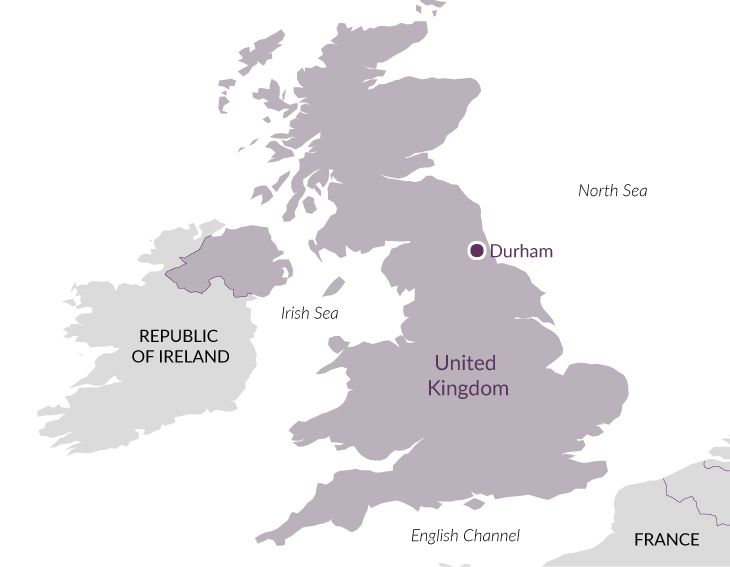 'To see objects such as Cuthbert's pectoral cross and copies of illuminated manuscripts, including Codex Amiatinus and the Lindisfarne Gospels was brilliant.'

'The tour exceeded my expectations. I would recommend this tour to anyone I know interested in this aspect of English history.'

'The lecturer was excellent, so knowledgeable and had a great sense of humour.'

'Thank you once again, you have delivered a first class tour!'