The ancient counties of Anjou and Poitou boast the richest and most diverse collection of twelfth-century monuments in France. They also occupy a position of great importance for the fabric of later medieval Europe.

Earlier, this region had been a pioneer in the development of feudalism, one of the effects of which was the growth of lay control over abbeys and collegiate churches. A consequence of this was that long established buildings were restored and new foundations established, and the region became a crucible of innovation in sculptural and architectural style. The frame of the western French church was subject to a series of changes of form and identity that were among the most dramatic of twelfth-century Europe.

This development of mature twelfth- and thirteenth-century solutions forms the core of the expedition. The extravagantly carved screen façades of Poitou and the Saintonge will be something of a feature, and that late twelfth-century predilection for aisleless or hall church designs, domed-up rib-vaulting and polychromed surfaces will be given corresponding prominence. Nor will painting be neglected, on both glass and plaster, for the high spaces of St-Savin-sur-Gartempe and Asnières-sur-Vègre preserve two of the most beguiling and complex cycles of frescoes from Romanesque Europe, while the east windows of Poitiers cathedral frame some of its greatest late twelfth-century glass.

And though that rich vein of Carolingian and early Romanesque building has been largely superseded, a vein that marked out the Loire valley as one of the great stamping grounds of early medieval architectural thinking, enough remains to gain a sense of the range and monumental achievements of eleventh-century design in the region.

London to Angers. Take the Eurostar at c. 9.30am from London St Pancras to Paris. and then onwards by TGV (high-speed train) to Angers. First of four nights in Angers.

Angers. See magnificent Romanesque sculpture in the Benedictine cloister of St-Aubin. The 13th-cent. royal castle now houses Louis d’Anjou’s remarkable Apocalypse tapestry, the earliest and perhaps the greatest of medieval tapestry series. The cathedral is the grandest of the ‘Angevin Gothic’ churches, while St-Serge has a fine Gothic choir. Henry Plantagenet founded the Hôpital St-Jean and the Ronceray abbesses financed the inventive parish church of La Trinité.

Cunault, Fontevraud, Chinon. Drive along the south bank of the Loire, stopping at the light and spacious priory church of Notre-Dame-de-Cunault. Fontevraud, a vast monastic city, houses four communities on the same site: Plantagenet royal mausoleum, octagonal kitchen, Renaissance cloister. Chinon is home to Henry Plantagenet’s ‘beloved castle in the middle of France’.

Le Mans, Pirmil, Asnières-sur-Vègre. The day is devoted to the Maine with the morning at Le Mans cathedral, whose nave juxtaposes 11th-century aisles with a 12th-century elevation, and whose choir stands as one of the supreme statements of Gothic architecture. Return via the finest of the Mancelle parish churches and see the sculpture of Pirmil acting as a foil for the marvellous wall paintings at Asnières-sur-Vègre.

St-Jouin-de-Marnes, Airvault, Poitiers. Slip south over the border with Poitou to St-Jouin-de-Marnes, whose monastic church boasts the earliest elaborately carved western French screen façade, before alighting on Airvault. The afternoon is spent in Poitiers, where we see the early medieval baptistery and magnificent 12th and 13th-century cathedral. First of three nights in Poitiers.

Civaux, St-Savin-sur-Gartempe, Chauvigny. A day among the painted churches of the valleys of the Gartempe and Vienne. Civaux has a vast and enigmatic Merovingian cemetery and adjacent early medieval painted crypt. St-Savin-sur-Gartempe has the most extensive, most splendid cycle of Romanesque wall painting to survive in France. At Chauvigny see the dramatically situated seigneurial castle and collegiate church.

Poitiers. Spend the morning in the medieval town. See St-Hilaire, a majestic Romanesque pilgrimage church, Ste-Radegonde, an engaging amalgam of 11th, 12th and 13th-century themes, and Notre-Dame-la-Grande, with its superb show front overlooking the market place.

Jazeneuil, Melle, Aulnay, Saintes. Drive along the camino, the pilgrimage road running south-west towards Santiago de Compostela. Visit Jazeneuil, the stunningly embellished east end of the church banked above the river, and the great Romanesque churches at Melle, including St-Hilaire with majestic ‘Constantinian Rider’ fantastically perched above the north portal. Aulnay is home to a spellbinding pilgrimage church. First of two nights in Saintes.

Saintes, Pons, Talmont-sur-Gironde. Morning in Saintes, a renowned Roman city extensively redeveloped during the middle ages. Visit the extra-mural Cluniac monastery of St-Eutrope and the Abbaye-aux-Dames, an important nunnery with a mesmerising facade and well-preserved group of monastic buildings. Afternoon drive to Pons to see the celebrated pilgrims’ hospital, and Talmont, beautifully sited above the Gironde.

Drive to Niort for the TGV train to Paris Montparnasse. Transfer within Paris to the Gare du Nord for the Eurostar arriving at London St Pancras at c. 6.30pm.

Train travel by Eurostar (Standard Premier) & TGV (first class); travel by private coach; accommodation as described below; breakfasts, 2 lunches & 7 dinners with wine, water and coffee; all admissions; all tips; all taxes; the services of the lecturer and tour manager.

A considerable amount of walking and standing around is involved. You will need to lift your own luggage on and off the train and wheel it within stations. Average distance by coach per day: 65 miles. 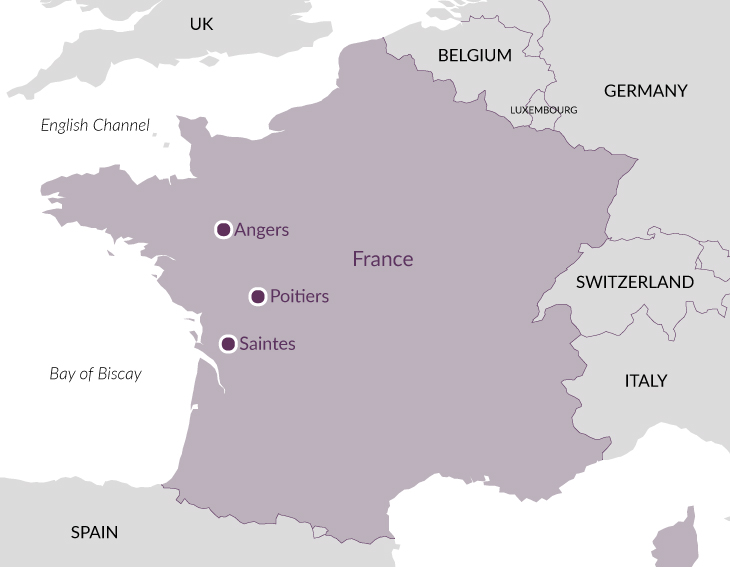 'What a paragon of a lecturer. All of his talks were so very informative and full of fascinating detail.'

'Excellent selection – good mix of bigger and smaller sites – all well worth seeing.'

'Thank you for a wonderful holiday in every respect.'