Arts & Crafts in the Lake District - Churches, houses and museums

Fine examples of the Arts & Crafts movement in situ.

Some of the most striking and unspoilt landscape in the country.

Stay all four nights in one hotel on the shore of Lake Windermere.

A century after the aesthetic ‘discovery’ of the English Lakes by an elite generation of Romantic travellers, its beauty and cultural history became a magnet and an escape from the effects of industrialisation for a wider cohort of tourists, creators and patrons carried by railway, bicycle and lake steamers.

Hitherto hidden hamlets developed into resort towns catering for this wealthy leisured class, who both delighted in the quaint crafts and culture of a remote and unspoilt region, and raised concerns for their conservation that remain today.

These concerns became moral imperatives, rooted in Wordsworth’s influence on John Ruskin’s belief in the importance of nature and the arts for the social well-being of mankind. Ruskin’s philosophy was central to early exponents of the Arts & Crafts movement, whose work articulated a celebration of the rural vernacular, reverence for traditional crafts and methods, and respect for  ‘honest’ making.

Ruskin, inspiration to William Morris, Philip Webb and a generation of architects, designers and artists, bought Brantwood by Coniston in 1871. Morris’s ‘Firm’ supplied stained glass and decoration in great houses and numerous churches for landowners such as George Howard, who commissioned remarkable work from Webb and Burne-Jones at Brampton. According to tradition, Morris came to the Lakes on a fishing holiday with Ford Madox Brown while Burne-Jones was working on the East Window of Troutbeck Church, and contributed to the creation of this minor masterpiece.

Northern industry, not land, provided wealth to newer patrons whose Lakeland holiday houses were created by a younger generation of cutting-edge designers such as Voysey and Baillie Scott. Their joy in local materials, craftsmanship and landscape is seen spectacularly at Broad Leys, and Blackwell on Windermere built for brewery magnate Sir Robert Holt.

The Lake District saw the foundation of the National Trust in the 1890s by Canon Rawnsley, founder of the Keswick School of Industrial Arts and mentor of naturalist and author Beatrix Heelis, née Potter. It became Britain’s first National Park in 1951 as the Festival of Britain celebrated national creativity and consciousness. This tour presents the Arts & Crafts through houses, churches and museums within the incomparable landscape that survives thanks to conservationists of many generations.

Penrith, Hutton in the Forest. The coach leaves Penrith Railway station at 1.30pm. Hutton in the Forest is a fascinating family home with medieval origins, encompassing the changing aspirations and fortunes of the region in its architecture and decoration, including Arts and Crafts interiors of the 1870s.

Warwick Bridge, Carlisle, Naworth. Our Lady & St Wilfrid’s is Pugin’s only church in Cumbria, and in the words of Pevsner: ‘it is here and more or less precisely in 1841 that archaeological accuracy begins in English church design’. Carlisle’s Tullie House museum holds a collection of Pre-Raphaelite art. Philip Webb worked at Naworth Castle which is still a private ancestral home of the Howard family. Nearby St Martin’s Church, designed by Webb with windows by Burne-Jones, is a magnificent outcome of this relationship.

Troutbeck, Staveley, Wreay, Keswick. Two small Cumbrian churches at Troutbeck and Staveley contain beautiful windows designed by Burne-Jones, and made by Morris and Co. In contrast, the church of  St Mary’s, Wreay is an eccentric forerunner of many Arts & Crafts principles in its inspiration from nature and use of the local vernacular. Keswick Museum & Art Gallery celebrates the Keswick School of Industrial Art set up by Canon and Mrs Hardwicke Rawnsley as a social enterprise that also marketed local craftsmanship to  growing numbers of middle-class tourists. Resort towns developed to serve these visitors, some of whom commissioned holiday houses along the shores of Lake Windermere.

Urswick, Barrow in Furness, Bowness, Broad Leys, Blackwell. Urswick’s church of St Mary and St Michael is unusual in containing work by Alec Miller, of the Guild of Handicraft based in the Cotswolds. Nearby Abbey House by Lutyens was built in 1914 for Vickers Ltd as a residence for their Managing Director to entertain ministers and heads of state for the purpose of selling warships and armaments. The ancient parish church of St Martin’s in Bowness on Windermere has a fine collection of medieval glass in its east window, set off by a unique Arts & Crafts decorative scheme from the 1870s. Along the lake and commanding spectacular views is Broad Leys, a superb example of domestic design by Voysey. Its contemporary and neighbour, Blackwell, by Baillie Scott, has been restored to a high standard.

Coniston, Brantwood, Oxenholme. Drive to Coniston for the Ruskin Room at Coniston Museum. Brantwood house, on the edge of Coniston Water has an extensive literary history and a major collection of Ruskin’s drawings, paintings, and scientific collections; it also contains his original furniture and his boat and Brougham carriage are displayed in outhouses. Return to Oxenholme train station by 2.15pm.

Travel by private coach; hotel accommodation as described below; breakfasts; 1 lunch and 3 dinners with wine, water, coffee; all admissions; all tips; all taxes; the services of the lecturer and tour manager.

Waterhead, Ambleside: 4-star modern, comfortable hotel on the shore of Lake Windermere. Single rooms are doubles for sole use.

The tour involves a lot of walking where coach access is restricted, and a lot of standing in museums, houses and churches. Uneven ground and irregular paving are standard. A good level of fitness is essential. You will be on your feet for lengthy stretches of time. Average distance by coach per day: 73 miles. 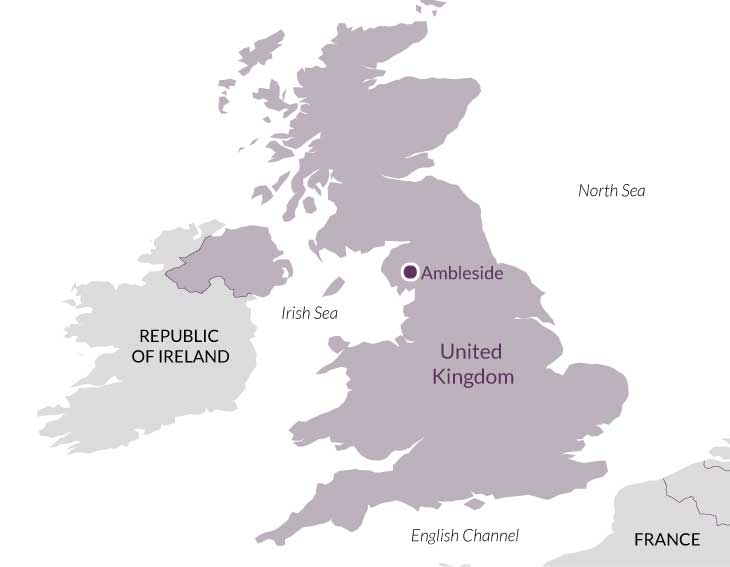