Four days in Calcutta, Bengal’s capital, and a week on an exclusively chartered cruiser visiting places along the Hooghly River, a distributary of the ‘Lower Ganges’.

Bengal, an outpost of the Mughal Empire and the first region to come under the control of the East India Company.

Islamic architecture in Murshidabad and Gaur, Hindu temples in Baranagar and Kalna, Georgian and Victorian buildings of the Raj.

Sailing along the banks of the Hooghly gives a unique insight into unspoilt village life.

When George V announced in 1911 that the capital of British India was to be transferred from Calcutta to Delhi, there was disbelief and horror in Bengal. Founded by Job Charnock in 1690 on the banks of the mighty Hooghly River, Calcutta (now Kolkata) had been the headquarters of British rule in India ever since. Today the city is home to over fifteen million, but the central district remains largely as it was during the Raj.

Buildings of all sorts – political, economic, educational, religious, residential – formed the British city. Their styles, Classical and Gothic, are bizarrely familiar and their size is startling, often exceeding their equivalents in Britain. A walk through the South Park Street Cemetery shows the high price that many Britons paid for coming to Calcutta in search of wealth. ‘Power on silt!’ wrote Kipling of the city. ‘Death in my hands, but Gold!’

West Bengal is the land of lost capitals and fading grandeur. Calcutta was only the latest city whose power was snatched away by changing political events. Hindus, Muslims, Portuguese, Dutch, Danish and French all founded settlements on the dreamy, fertile banks of the Hooghly.

For a time Bengal was the richest province in India, not only because everything seemed to grow in its lush soil but from the industry of its people too. Indigo, opium and rice were cash crops, but textiles first attracted European traders in the seventeenth century. Beautiful silk and muslin fabrics were known as ‘woven wind’ because they were so fine. The river was a natural highway. Apart from the Grand Trunk Road of the Mughals, there was no other way to travel.

Steeped in history but still very much off the conventional tourist route, this tour adds a new dimension to India for those who already know it, and for those who are yet to encounter it.

Hinduism, Islam, Jainism, and Christianity are all practised in Bengal and each faith has built buildings to its gods and goddesses. The town of Kalna is named after a manifestation of the dreaded goddess Kali, the destroyer who lives in cremation grounds and wears a necklace of skulls. By contrast the Jain temples in the village of Baranagar are a peaceful anthem in carved brick to non-violence and harmony. Bengal contains the largest imambaras in India, buildings associated with the Shi’a strand of Islam, not quite mausolea, although burials are frequently found in them, more gathering places for the devout. Serampore, the Danish settlement, is known for its eighteenth-century church.

Had the British under Clive not defeated the Nawab Siraj-ud-daula at the Battle of Plassey in 1757, the history of India would have been very different. The French, established at Chandernagore and allies of the Nawab, would have seized their opportunity, supported by Francophone rulers elsewhere in India who wanted to counterbalance the pervasive British presence. But it was from their base in Bengal that the British steadily extended their rule through the subcontinent.

The cruiser chartered for this tour is fairly new (built in Calcutta in 2013). By the standards of vessels on European rivers it is not luxurious, but it is comfortable, has great charm and the crew are welcoming and efficient.

Lounging on the top deck after a fulfilling day of sightseeing with a gin & tonic, watching rural life on the banks as dusk falls, comes pretty close to a perfect Indian experience.

Calcutta (Kolkata). The tour begins in Calcutta with a free morning (flights from London are not included – see Practicalities). Rooms are available at the hotel from 2.00pm on the 15th November, allowing for an early check-in. In the afternoon visit the South Park Street Cemetery, where tombs of the early British settlers are of a monumental classicism without parallel in Britain. First of three nights in Calcutta.

Calcutta. This morning’s walk provides a survey of the civic buildings from the late 18th-century. St John’s Church, which dates back to 1784, is loosely modelled on St Martin-in-the-Fields in London (like hundreds throughout the globe). In the grounds, the mausoleum of Job Charnock, the founder of Calcutta, is the earliest British building in India. Optional visit in the afternoon to the Indian Museum, built by Granville to house the collection from the Asiatic Society, is India’s most important collection of sculpture.

Calcutta. The Anglican cathedral of St Paul, completed in 1847 in Gothic style, has many fine memorials and a window by Burne-Jones, one of his best. Completed in 1921, the Victoria Memorial is the most imposing building in Calcutta. It houses a collection of European paintings and a display on the history of the city. In the evening visit Srijit Tagore’s Residence for a private Bharatanatyam performance by world acclaimed dancer, Souraja Tagore.

Calcutta, Farakka. The Maghen David Synagogue (1884) and the Armenian Church (1707) are reminders of the variety of religions which thrived in Calcutta prior to Independence. Catch an afternoon train (c. 4 hours) to Farakka to board the RV Rajmahal in the early evening. First of seven nights on board the RV Rajmahal.

Gaur, Farakka. Drive from Farakka to the quiet city of Gaur, the ancient capital of Bengal. Situated within easy reach of the black basalt Rajmahal hills, Gaur is filled with elegant Muslim ruins. The many mosques, palaces and gateways stand as testament to a prosperous past and gifted stonemasons. Sail in the afternoon through a stretch of charming waterway that weaves past banks lush with mango groves and mustard crops to the village of Baranagar. Moor here overnight.

Baranagar. Walk through fields to visit three miniature carved-brick Jain temples. Sail to Murshidabad, where a magnificent example of Greek Revival architecture, the Hazarduari Palace was built by Duncan McLeod in 1837 as a guest house for the Nawab. The museum holds a respectable collection of European paintings, sculpture and arms. The imposing Katra Mosque (1724) is modelled on the great mosque at Mecca. Visit the Katgola palace, 18th-century home of rich Jain merchants in classical Georgian style. Remain at Murshidabad overnight.

Murshidabad, Plassey, Katwa. The Mughal Khushbagh is a peaceful walled pleasure-garden containing the Tomb of Siraj-ud-Daulah and family. After sailing further, there is an excursion to the site of the battle of Plassey, where Robert Clive’s 1757 victory over the Nawab of Bengal, Siraj-ud-Daulah was the prelude to consolidation and extension of the East India Company’s power in Bengal and beyond. Continue sailing to Katwa for the night.

Matiari, Nabadwip, Mayapur. Visit the village of Matiari where brass is worked using traditional methods. Sail to the pilgrimage centre of Nabadwip, where the river ghats are lined with active temples for a leisurely walk in the bazaar. The skyline of Mayapur on the opposite bank is dominated by a vast new temple. Sail in the evening from Mayapur to Kalna.

Chandernagore. Visit the remaining churches and cemeteries as well as Governor Joseph François Dupleix’s House. Sail to the former Danish colony of Serampore, which came under British rule in 1845. Continue sailing to Calcutta in the evening.

Disembark Calcutta. At Calcutta, disembark the RV Rajmahal in the morning and transfer to the hotel. The Home of Rabindranath Tagore, the Bengali poet and philosopher who received the Nobel Prize for literature in 1913, provides an insight into the Bengali Intellectual Renaissance which in turn led to the Independentist movement. Overnight in Calcutta.

Calcutta. The tour ends after breakfast. Transfers are arranged for your onward travel.

Arrival and departure airport transfers; travel by private air-conditioned coach and one journey by train (in the best class available); accommodation in the hotel and aboard the river cruiser as described below, breakfasts, 8 lunches and 10 dinners with soft drinks, beer, water and coffee at lunch and wine at dinner, where available; all admissions; all tips; the services of the lecturer, tour manager and local guides.

From London to Calcutta are not included in the price of the tour. We will send the recommended flight options when they come into range (December 2019) and ask that you make your own flight reservation. Please ensure you have travel insurance that protects you in the unlikely event that the tour is cancelled.

Required for most foreign nationals, and not included in the tour price. We will advise all participants of the process.

Changes to the itinerary

Circumstances might arise which prevent us operating the tour as advertised. On the river, circumstances such as the ebb and flow of the tide and shifting silt levels might necessitate omission of one or more ports of call. We would try and devise a satisfactory alternative.

A good level of fitness is essential. Unless you enjoy entirely unimpaired mobility, cope with everyday walking and stair-climbing without difficulty and are reliably sure-footed, this tour is not for you.

A rough indication of the minimum level of fitness required is that you ought to be able to walk briskly at about three miles per hour for at least half an hour, and undertake a walk at a more leisurely pace for an hour or two unaided. You may be on your feet for lengthy stretches of time. Uneven ground and irregular paving are standard.

Sure-footedness is essential to get on and off the ship; the riverbanks may be slippery. Unruly traffic and the busy streets of Calcutta also require vigilance.Uneven ground and irregular paving are standard. There are a few fairly steep ascents to hilltop forts and temples. There is a 4-hour train journey where facilities may be limited. 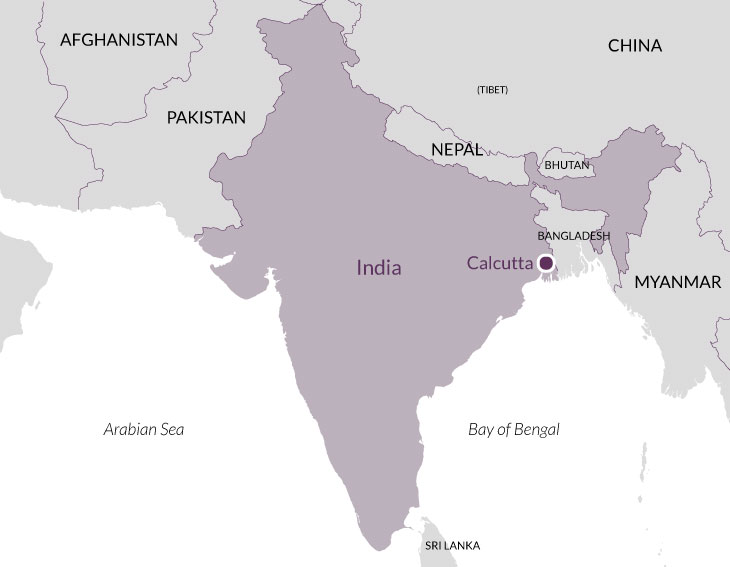 'This is one of the best trips I have ever done. It was beautifully planned.'

'The boat was very comfortable and was greatly enhanced by the professional and very helpful crew who couldn't do enough for you.'

'I will go to India with you again. Your itineraries cover things others do not – India is getting a more in depth treatment.'

'A fascinating blend of colonial history.'