Built between the Norman Conquest and Henry VIII’s Reformation, with Coventry Cathedral a moving exception.

Organ recitals exclusively for us, and many other special arrangements.

This is an architectural journey that would be hard to equal for intensity of aesthetic delight, and as a way into the minds and lives of the people of the Middle Ages it would be difficult to surpass. Personalities of extraordinary capability and vision will be discovered, and the thought processes and techniques used by craftsmen of genius revealed and decoded.

The tour ranges across England – north, south, east and west – to see some of the most glorious medieval architecture to be found anywhere. Connoisseurs may carp at the omissions, but logistics exclude only a couple of cathedrals of comparable beauty, magnificence and interest. With an average of little over one cathedral a day, there is plenty of time to really get to know, assimilate, appreciate and contemplate each one.

All but one are medieval, Norman (as Romanesque is generally called in Britain) and Gothic. It is easy to underestimate the length of time the Middle Ages encompasses: the span from the earliest work we see on the tour to the latest, from the Norman Conquest to the Reformation, equals that from the Reformation to the present day. There was huge variety in the building arts and historical circumstances during those 460 years. The one non-medieval cathedral on the itinerary is Coventry. Rebuilt after the Second World War, not only is it a treasure house of mid-twentieth-century art but it is a moving monument to rebirth and reconciliation.

There are many special arrangements to enable you to see more than most visitors. An organ recital is organised for us at Durham Cathedral. There are also opportunities to hear some excellent choirs at Evensong. Cathedrals come with cities, and many of these were relatively little changed during the era of industrialisation and now rank among the loveliest in England. Much beautiful countryside is traversed as well.

Ely. The coach leaves King’s Cross, London at 9.30am for Ely, a surprisingly remote and rural location for one of England’s greatest cathedrals. The mighty Norman nave and transepts (c. 1110–30), with their thick walls, tiers of arches and clusters of shafts, leads to the crossing and its unique 14th-century octagonal lantern, a work of genius. The detached Lady Chapel, also in the Decorated style, is the largest and perhaps the finest in the country; the Early English quire a ravishing setting for the lost shrine to St Etheldreda. Overnight Lincoln.

Lincoln. Also largely by-passed by modern urban development, Lincoln’s hilltop site above the broad Witham valley renders this enormous cathedral even more imposing. Largely rebuilt from 1192, it has always been revered as one of the finest of Gothic cathedrals, its fascinations enhanced by myriad minor inconsistencies and variations which reveal the struggle for solutions at the frontiers of artistic fashion and technological capability. The steep streets of the ancient town are a delight. First of three nights in York.

Durham. Massive towers rise above the trees which cling to the steep embankment, a defensible bulwark in the frequently hostile North. Largely completed in the decades from 1093 and little altered since, the nave and quire with their great cylindrical pillars, distinguished by their engraved patterns, constitute one of the world’s greatest Romanesque churches.

York. York Minster is the largest of English medieval cathedrals. Above ground it is all Gothic, from Early English to Perpendicular but predominantly 14th-century, demonstrating an exceptional knowledge of the latest French Rayonnant ideas. It is a treasure trove of original stained glass, and the polygonal chapter house is without peer. The city retains its medieval walls and an exceptional quantity of historic buildings.

Coventry. Coventry Cathedral is perhaps internationally Britain’s best-known 20th-century building. Built to designs by
Sir Basil Spence beside the ruins of its predecessor, destroyed in 1940, it is both a showcase for some of the best art of the time (Graham Sutherland, John Piper, Jacob Epstein). In the evening, a walk through Stratford-upon-Avon, which has retained many buildings Shakespeare would have known. Overnight Stratford.

Gloucester, Bristol. The procession of tall cylindrical pillars in Gloucester’s nave is unadulterated Norman, but, following the burial of Edward II in 1327, the eastern parts are exquisitely veiled in the first large-scale appearance of Perpendicular architecture. The east window, which retains its medieval stained glass, is one of the largest in Europe. Bristol cathedral is a much-overlooked gem with fine work of every era, from the lavishly patterned walls of the Romanesque chapter house to G. E. Street’s great Victorian nave. But its highlight is the east end, among the most innovative and beautiful of early 14th-century buildings. First of two nights in Shepton Mallett.

Wells. An exceptionally unspoilt little city, Wells has a fortified bishop’s palace, 14th-century houses of the Vicars Choral and much else of charm and interest. The cathedral was one of the first in England to be built entirely in Gothic style. Its screened west front, eastward march of the nave, sequence of experimental contrasted spaces of the Decorated east end, serene chapter house and Perpendicular cloisters all contribute to the cathedral’s exceptional allure. The strainer arches supporting the sagging tower are among
the great creations of the Middle Ages.

Salisbury. One of the most uplifting experiences in English architecture, Salisbury is unique among the Gothic cathedrals in England in that it was built on a virgin site and largely in a single campaign, 1220–58. To homogeneity are added lucidity of design and perfection of detail. Completed a century later, the spire at 404 feet is the tallest medieval structure in Britain. The close is the finest in the country, and the town beyond has an extensive expanse of historic fabric. Overnight Winchester.

Winchester. Winchester Cathedral is one of Europe’s longest churches, reflecting the city’s status intermittently from the 9th to the 17th centuries as a seat of English government. The transepts are unembellished early Norman (1079), raw architecture of brute power, whereas the mighty nave was dressed 300 years later in suave Perpendicular garb. The profusion of chantry chapels constitutes an enchanting collection of Gothic micro-architecture. Wall paintings, floor tiles, the finest 12th-century Bible. Return to Tothill Street in central London by 4.00pm 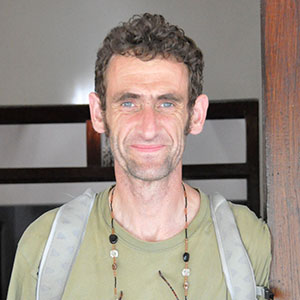 Writer, lecturer and broadcaster, and specialist in historic religious architecture. He has written widely on English medieval church architecture, and co-wrote and presented the BBC’s How to Build a Cathedral. He has also travelled extensively in China and has published on the country in the London Review of Books and in his The Secret Language of Sacred Spaces.

Hotel accommodation; private coach throughout; breakfasts, 1 lunch and 6 dinners with wine, water, coffee; all admissions and donations; all tips; the services of the lecturer and tour manager.

The Castle Hotel, Lincoln: 4-star historic building close to the cathedral. The Grand, York: the former headquarters of North Eastern Railway, the hotel retains many original features. The Arden Hotel, Stratford-upon-Avon: a comfortable, 4-star, waterside hotel situated opposite the RSC theatres. Charlton House Hotel, Shepton Mallett: 4-star country house hotel set in the Somerset Mendips. Hotel du Vin, Winchester: a 4-star, 18th-cent. hotel located in the city centre. Rooms at all the hotels, being city-centre historic properties, vary in size and outlook. Single rooms are doubles for sole use throughout.

There is quite a lot of walking on the tour. You ought to be able to walk at about three miles an hour for up to half an hour. There are also a lot of steps and uneven surfaces. Roof and tower visits are optional of course, but at Salisbury there are 332 stairs to climb. Four out of the five hotels do not have lifts. Average distance by coach per day: c. 73 miles. 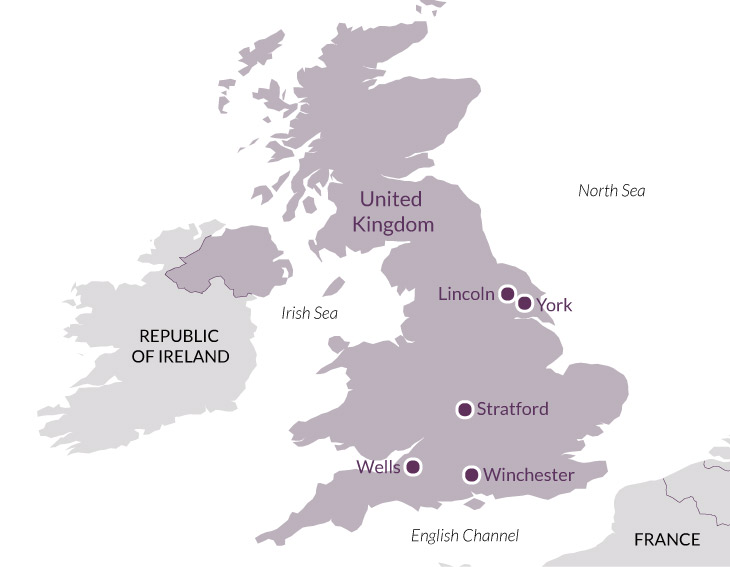 'The lecturer was excellently prepared and communicated vast learning with charm and a light touch.'

'The itinerary was enriching. The whole experience was rich and coherent.'

'This was my first experience with Martin Randall. You met and exceeded all my expectations. I could not have been more pleased.'

'The lecturer was an unbelievably knowledgeable, enthusiastic and affable tour leader. He was a consummate teacher who made the complexity of the history, geography and structure of the cathedrals both interesting and accessible. We were constantly enthralled.'