Altamira II, El Castillo, Tito Bustillo – these are among the most important prehistoric caves in Europe.

As well as the monumental cities of Burgos and Oviedo, we stay in the medieval village of Santillana del Mar.

Visiting the Ice Age decorated caves of Europe may be a pilgrimage, in homage to the region’s artists of 30,000–10,000 years ago, or it may simply be curiosity. But while one’s interest may have been triggered by books, television or lectures, there is simply no substitute for seeing the sites themselves, some of humankind’s greatest artistic achievements in their unusual, evocative and original settings. In addition, the caves of northern Spain are in regions of outstanding beauty, famed for their seafood and cuisine. Three nights are spent in Santillana del Mar, a well-preserved medieval village close to Altamira, one of the most famous and historic decorated caves, located in a striking landscape. Other caves such as Covalanas and Pindal are in settings with breathtaking views.

Whatever your motivation or interest, a visit to an Ice Age cave is a tremendous privilege. After more than a century of research we still only know about 400 such sites in Eurasia, and only a small fraction of these are open to the public because of difficulties of access or conservation concerns. As such, they constitute a very limited and finite resource, and yet visitors can approach these original masterpieces extremely closely, an experience unparalleled in major art galleries.

Unlike a visit to the Louvre or the Prado, in entering a cave you are seeing the images precisely where they were created; you are standing or crouching just where the artists did. In many cases the journey to the cave entrance and the route through the chambers give your experience a sense of immediacy, purity and vividness. Entering a world far removed from one of commerce, art-dealers and critics enhances a feeling of connection with the artists. There is nothing like a stalactite dripping on your head to remind you that you are in a pristine and natural setting.

Fly at c. 9.15am from London Heathrow to Madrid (Iberia Airlines). Continue by coach to Burgos. The Museum of Human Evolution is one of the biggest and most important in the world devoted to this theme, and contains a magnificent display of the major finds from the sites at Atapuerca. Overnight in Burgos.

Burgos. Atapuerca is one of the richest and most important groups of archaeological sites in the world, and yet despite the amazing quantity of discoveries so far, the surface has barely been scratched, and work will continue for decades or even centuries to come. Already Atapuerca has yielded the oldest evidence for human occupation in Europe, with early tools and evidence for cannibalism, as well as the world’s earliest evidence for some kind of funerary ritual, and a massive quantity of well-preserved bones of our distant ancestors. Burgos Cathedral is one of the most beautiful in Spain, combining French and German Gothic styles, and has remarkable vaults and 16th-century choir stalls. Drive in the late afternoon to Santillana del Mar for the first of three nights.

El Castillo, El Pendo. The decorated caves of El Castillo and Las Monedas are close to each other but very different. El Castillo was decorated in many periods of the Ice Age over thousands of years, and indeed contains the oldest known cave art at present, while Las Monedas was decorated by one person at the end of the Ice Age. Both contain some masterpieces. At El Pendo the art on the back wall of the vast entrance chamber was only discovered recently. Careful cleaning of the surface revealed a whole series of beautiful animal figures.

Covalanas, Altamira. The cave of Covalanas is often voted people’s favourite, because unlike the others it is entirely pristine, with no installations of any kind, so that one visits with a hand-held lamp. It is so narrow that one’s face is literally inches from these beautiful dotted-outline figures from about 20,000 years ago. Only seven people may enter at one time. The extremely accurate facsimile of the cave of Altamira is as astonishing as the original, and enables one to have a detailed look at the many facets of this highly complex decorated ceiling.

Pindal, Tito Bustillo. Pindal contains two of the very few depictions of mammoths in northern Spain, as well as some other very fine and fascinating figures, while the cave’s spectacular coastal setting always makes it a popular site. The cave of Tito Bustillo requires a long walk past impressive stalagmites and stalactites to reach the complex decorated panel, one of the finest in all of cave art, which features the striking use of a very rare purple pigment. Continue to Oviedo for the first of two nights.

Candamo, Teverga. The visitor centre at Candamo contains a facsimile of the cave itself and other shelters of the region. The Park at Teverga is a recent development which provides a final overview of the phenomenon of Ice Age cave art, including facsimiles of panels from a variety of caves in Spain and France.

Oviedo. Some free time in Oviedo to visit the Gothic cathedral, with a fine altarpiece and tombs of the Early Asturian kings, and the remarkable Cámara Santa, the original pre-Romanesque church of King Alfonso II the Chaste (791–842). Take an early afternoon flight from Asturias airport, via Madrid, arriving at London Heathrow at c. 5.15pm.

Air travel (economy class) with Iberia Airlines (aircraft: Airbus 320); travel by private coach throughout; hotel accommodation as described below; breakfasts, one lunch and five dinners with wine, water and coffee; all admissions; all tips; all taxes; the services of the lecturer and tour manager.

A lot of walking is involved to reach the caves, often over rough ground or up steep gradients. Inside the caves the ground is slippery underfoot; sure-footedness is essential. Unless you enjoy entirely unimpaired mobility, cope with everyday walking and stair-climbing without difficulty and are reliably sure-footed, this tour is not for you.  Average distance by coach per day: 99 miles. 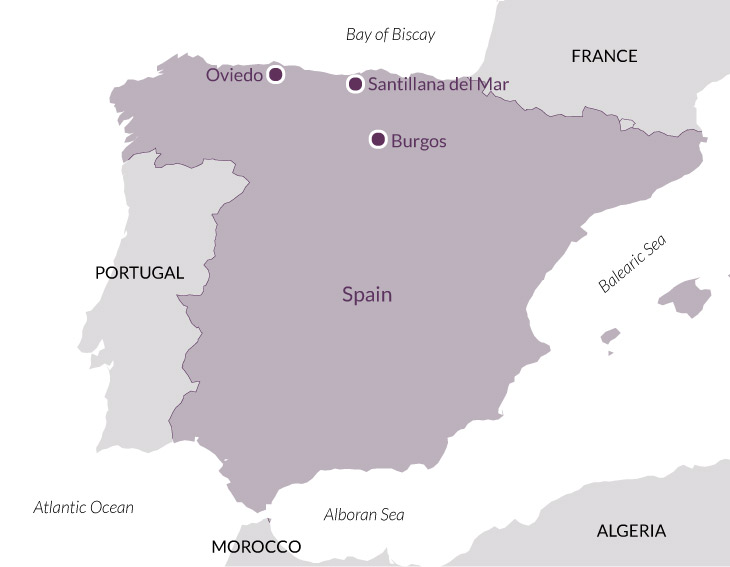 ‘Lecturer Paul Bahn is extremely informative and generous with his knowledge, and has a wicked sense of humour which kept us entertained.’