Retraces the ancient trading routes from the Chinese heartland to the vast desert region of Xinjiang province.

Three days in the ancient imperial capital Xi’an, once the easternmost departure point for the Silk Road and home to the spectacular terracotta warriors.

Special access is a feature including a viewing platform for the Terracotta Warriors and caves not usually open to the public at Mogao. (subject to confirmation).

100% of participants rated this tour as excellent the last time it ran.

In the second century BC, imperial envoy Zhang Qian was sent on a mission to the West, beyond the outer limits of ancient China, to obtain some of the legendary Ferghana horses for Han emperor Wudi’s cavalry. On the equine front the mission was a failure, but Zhang Qian returned to Chang’an (today’s Xi’an) with stories of the riches he saw and this soon led to the development of trade between China and the alien world beyond its western frontier.

Myriad commodities – as well as religious beliefs and cultural attitudes – traversed the land from China, through Central Asia and Persia to the Mediterranean. The formidable Taklamakan Desert, an arid wasteland of shifting sand dunes, posed one of the biggest threats to travellers, who skirted its northern and southern edges, finding respite in the many thriving oasis towns.

The instability brought about by the fall of empires and by the establishment of sea routes saw the decline of these trading corridors and the region disappeared into obscurity until the end of the nineteenth century, when tales of lost cities filled with treasure drew foreign explorers into an international race of rediscovery.

Today, evocative ruins, chaotic markets and Buddhist cave paintings remain to be seen, while the museums are filled with the many artefacts and mummified remains unearthed along the route. Despite relentless modernisation, cities retain their ancient charm, while the enormity of these perilous journeys is conveyed by sight of the vast expanses of landscape that make up China’s last great wilderness.

Beijing. The tour begins in Beijing with lunch in the hotel (flights from London are not included. Your room is available from 3.00pm on 16th April or 17th October – see Practicalities). The Capital Museum is a striking modern building containing a selection of art and artefacts including wonderful ancient Buddhist statues. Overnight Beijing.

Beijing. The tour begins in Beijing with lunch in the hotel (flights from London are not included. Your room is available from 3.00pm on 14th October – see Practicalities). The Capital Museum is a striking modern building containing a selection of art and artefacts including wonderful ancient Buddhist statues. Overnight Beijing.

Beijing to Xi’an. Fly from Beijing to Xi’an. After a late lunch there is a walk through the winding streets of the city’s Muslim Quarter. The Great Mosque, one of the largest in China, was originally built in AD 742 although the present fabric dates from the Qing Dynasty. First of three nights in Xi’an.

Xi’an. The Shaanxi History Museum explains the history and culture of the province, the heartland of ancient Chinese civilisation. There is a special visit to the museum’s collection of Tang-dynasty tomb murals. After lunch, visit the Beilin Museum, which houses a collection of stone stelae, engraved with classic texts and masterpieces of calligraphy, as well as a fine collection of early statuary.

Xi’an. Full-day excursion east and north of the city. The tomb of the first emperor, Qin Shihuangdi, is yet to be excavated but his legacy was secured in 1974 when farmers digging a well discovered his terracotta army of infantry, cavalry and civil servants. There may be 20,000 of them, over 1.5 metres tall; only a relatively small part of the site has been uncovered, but it is nevertheless one of the most spectacular archaeological finds of all time. The pottery warriors at the later tomb of the fourth Han emperor, Liu Qi, display striking attention to detail; some eunuch figures have been found here, providing the earliest known evidence of this phenomenon in China.

Xi’an to Kashgar. The Great Goose Pagoda was first built in AD 652 for the monk Xuanzang to house the sutra he brought back from his pilgrimage to India. Fly to Kashgar and transfer to the hotel. First of three nights in Kashgar.

Kashgar. The former British Consulate was the home for 26 years of the most famous of British India’s representatives in Kashgar; Sir George Macartney and his wife hosted some of the most prominent Silk Road travellers, including Sir Aurel Stein and Albert von Le Coq. Nikolai Petrovsky’s former Russian Consulate is nearby. The dilapidated buildings belie their historic significance as erstwhile outposts for two rival powers in the Great Game. After lunch, visit the Id-kah Mosque. This is the largest mosque in Xinjiang and was founded in c. 1738, though the current structure dates back only as far as 1838, and suffered much damage during the Cultural Revolution.

Bulaksu. Goods and livestock have been traded at Bulaksu’s Wednesday market for more than 2,000 years. The scene today is still a riot of colour, sounds and smells as animals, carts and vehicles traverse this vast site.

Kashgar to Turpan via Urumqi. Fly from Kashgar to Urumqi. After lunch visit the Xinjiang Uygur Museum, which displays a fantastic collection of Tarim mummies, giving clues to the early Tarim Basin settlement. Continue by coach to Turpan. First of two nights in Turpan.

Turpan. At Gaochang see the extensive ruins of an ancient walled trading city. On the north-east rim of the Taklamakan Desert in a gorge in the Flaming Mountains, lies the Bezeklik Thousand Buddha Caves. The caves once formed part of a Buddhist monastery between the 6th and 14th centuries. After lunch drive out to Jiaohe. The most visually rewarding of all the sites around Turpan, this ancient city is located on a high platform above two rivers. Among the ruins, the layout of the city is still clear: the residential district, the palace, the monastery complex.

Turpan to Dunhuang. Travel by train to Dunhuang (luggage is sent separately). Dunhuang is a small oasis town with low-rise buildings along wide avenues, flanked to one side by colossal sand dunes. The Dunhuang Museum houses important artefacts unearthed at the Mogao Caves, including rare Tibetan sutras. First of two nights in Dunhuang.

Dunhuang. The Mogao Caves are a highlight of the Silk Road in China and one of the most important sites of early Chinese Buddhist cave paintings. Once a strategic stop-off point for pilgrims travelling to India, it developed into a major Buddhist centre of art and learning. Despite the controversial carting off of paintings, sculptures and manuscripts by foreign archaeologists in the 19th century, there is still very fine artwork to be seen. The Western Caves, set by an attractive river valley, are fewer in number but also contain exquisite paintings.

Beijing to London. The tour ends after breakfast. There is a transfer to the airport in time for the recommended direct flight at c. 11.15am from Beijing to London, arriving at c. 3.30pm (c. 11 hours 15 minutes).

International flights are not included in the price – see below.

Flights from London to Beijing and Beijing to London are not included in the price of the tour. We will send the recommended flight options when they are available to book and ask that you make your own flight reservation and inform us of the details. The cost of a World Traveller (economy) seat at the time of going online is c. £700 and will be available to book c. 11 months before the tour departs.

Required for most foreign nationals, and not included in the tour price. We will advise participants on the process.

It is possible to arrange additional nights at the hotels before or after the tour, please contact us if you are interested. Rooms are available for check-in from 3.00pm on 17th October 2019. If you would like an earlier check in, hotels in China require you to pay for an extra night (on 15th April or 16th October). We can book this for you if you wish.

In 2020, the night of 14th October is also included in the price of the tour to allow for early check-in on Day 1.

A good level of fitness is essential. Unless you enjoy entirely unimpaired mobility, cope with everyday walking and stair-climbing without difficulty and are reliably sure-footed, this tour is not for you. Uneven ground and irregular paving are standard. There are some long coach journeys during which facilities are limited and may be of poor quality. Average distance by coach per day: 50 miles. 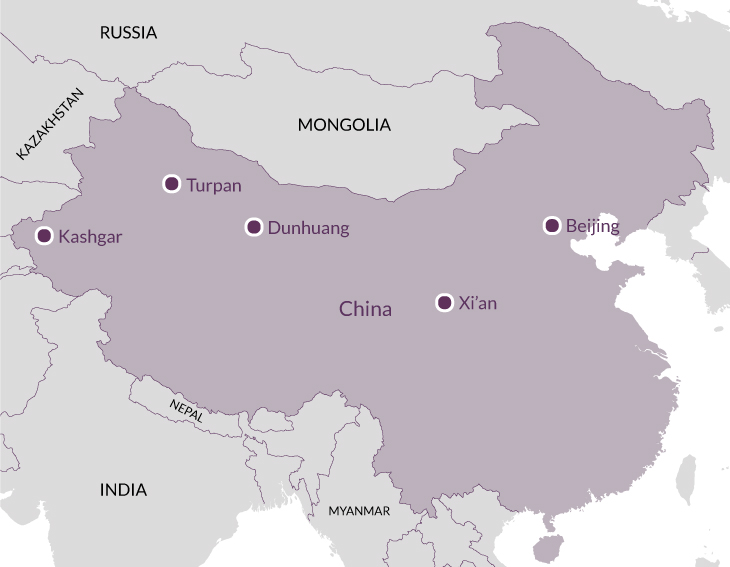 'Another MRT triumph, in that I was taken to see and learn about unforgettable marvels I didn’t know existed before the tour.'

'Our lecturer demonstrated encyclopaedic knowledge of everything, from the most erudite and arcane aspects of linguistics, archeology and the latest historical research, to aspects of present Chinese society and politic. He wore his learning lightly and married it with charisma, passion, charm and humour. Quite thrilling really.This is why I choose MRT over any other travel company.'

'Jamie Greenbaum is hugely knowledgeable and very enthusiastic about his topic. He could also answer questions about modern China and was endlessly patient and lots of fun.'