A magnificent range of art and architecture, from spectacular Byzantine mosaics in Ravenna to Correggio’s tumultuous frescoes in Parma, via Bologna’s mediaeval masterpieces.

Based for all six nights in the opulent Grand Hotel Majestic in Bologna.

Bound by the River Po to the north and the Apennines to the south, this wedge of Italy is truly rich – prosperous, replete with alluring cities and great works of art, deeply and proudly gastronomic – and yet is still undeservedly neglected by cultural travellers. With probably not one hundredth of the visitors which Florence and Venice receive and many fewer than, say, Verona or Siena, one can view great architecture and world-class art works without the dispiriting intrusions of a large-scale tourist industry, and particularly so at this time of year.

Across this undulating plain, one of the most fertile in Italy, the Romans founded a large number of prosperous towns and linked them by the Via Emilia which ran from Milan to the Adriatic coast. In the Middle Ages the region fragmented into a number of independent city states which, whether under a communal or despotic form of government, constructed mighty town halls, vast churches and splendid palaces, and caused great works of art to be created.

The tour is based in Bologna, one of Italy’s most engaging cities. The allure of aged red brick, great churches and memorial sculpture, magnificent palaces and civic buildings, first-rate galleries and frescoed halls and miles of arcaded streets are irresistible. As home of Europe’s oldest university, as a beacon of good civic governance and with a world-wide reputation for gastronomic excellence, one would think that a visit would be practically mandatory. But still the tourists stay away.

Ravenna and Parma are among other cities of great wealth and fascination visited during the tour. Once one of the most important cities in the western world and last capital of the Roman Empire in the West, Ravenna subsequently became capital of the Gothic kingdoms of Italy and of Byzantine Italy, and her Early Christian and Byzantine mosaics are the finest in the world. In Parma the often incompatible features of economic well-being and ancient, unspoilt and enchantingly picturesque streetscape are reconciled. The city was of great importance for its High Renaissance school of painting, in particular the astonishingly vital and illusionistic frescoes by Correggio in the cathedral.

Bologna. Fly at c. 8.30am (British Airways) from London Heathrow to Bologna. Drive to Bologna and in the late afternoon visit San Petronio, a vast Gothic church with sculpture by Jacopo della Quercia.

Bologna. The famous food market in Bologna sprawls through a maze of streets where shops and stalls display an overwhelming array of fresh pasta, artisanal mortadella, hams and salamis, cheeses, fresh fruit and vegetables, and an irresistible variety of bread and pastries. Led by a local expert, taste these products in some of the city’s historic food shops. In the afternoon visit the Museo Medievale, housed in Palazzo Fava.

Ferrara was the centre of the city-state ruled by the d’Este dynasty, whose court was one of the most lavish and cultured in Renaissance Italy. Pass the Castello Estense, a moated 15th-century stronghold, and the cathedral. The Palazzo Schifanoia (currently closed for restoration work) is an Este retreat with elaborate astrological frescoes. Should the Palazzo Schifanoia still be closed in December 2019, the excursion to Ferrara will be replaced with an excursion to Modena, an important seat of the Este dukedom. The Galleria Estense houses an important collection of art with works by Boticelli, Guercino and Correggio.

Parma. Parma is a beautiful city; the vast Palazzo della Pilotta houses an art gallery (Correggio, Parmigianino) and an important Renaissance theatre (first proscenium arch). Visit the splendid Romanesque cathedral with illusionistic frescoes of a tumultuous heavenly host by Correggio. Also by Correggio is a sophisticated set of allegorical lunettes in grisaille surrounding a celebration of Diana as the goddess of chastity and the hunt in the Camera di S. Paolo.

Bologna. Visit the Pinacoteca Nazionale, which houses works by Raphael, the Carracci family and Guido Reni. Continue to the Palazzo dell’Archiginnasio was the seat of the university until 1803. Visit the Sala dello Stabat Mater, where Rossini’s work had its Italian première, and the anatomical theatre. The rest of the afternoon is free.

Bologna. A free morning, opportunity perhaps to attend a mass at San Petronio or Santo Stefano. After lunch, there is the option of a meandering walk through some of Bologna’s most beguiling streets and squares, and a visit to Santo Stefano, a charmingly jumbled complex of mediaeval buildings.

Ravenna. Visit the Mausoleum of Galla Placidia, lined with 5th-century mosaics, and the splendid centrally planned church of S. Vitale with 6th-century mosaics of Emperor Justinian and Empress Theodora. In the afternoon visit the Cathedral Museum, which possesses fine objects, including an ivory throne, and S. Apollinare Nuovo, which has a mosaic procession of martyrs marching along the nave.

Flights (Euro Traveller) with British Airways (Airbus A319); travel by private coach throughout; hotel accommodation; breakfasts; 2 lunches and 4 dinners with wine, water, coffee; all admissions; all tips; all taxes; the services of the lecturer and tour manager.

Grand Hotel Majestic: an elegant 5-star deluxe hotel in the heart of Bologna, rooms vary in size but are all classically furnished and comfortable. Single rooms are doubles for sole use throughout.

The tour involves a lot of walking in town centres, where coach access is restricted, and a lot of standing in museums and churches. Average distance by coach per day: 42 miles. 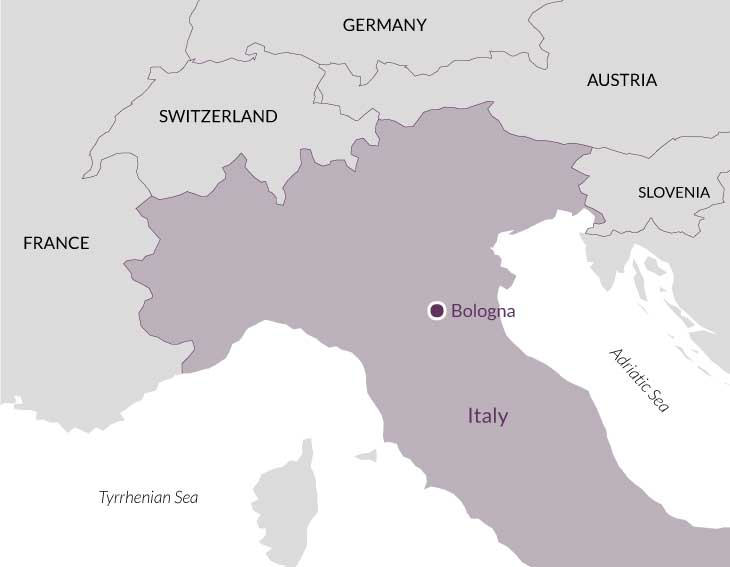