A wonderfully varied selection of country houses, from the 12th to the 20th centuries.

Among the special arrangements are two dinners and a lunch in houses visited.

‘The Garden of England’, known for orchards, hops and oast houses, still has remarkably unspoilt landscapes and villages.

One hotel throughout, a characterful 17th-century country house in 22 acres of parkland.

The county known for centuries as the ‘Garden of England’ for its orchards, hops and oast houses still boasts remarkably unspoilt landscapes and villages, despite its proximity to London and the transport links to south-east ports. That closeness to the metropolis lay behind the creation of most of them, being built by courtiers who needed to be within a day or two’s ride to the capital.

Some played a part in affairs of state at the highest level: the woman indirectly responsible for the creation of the Church of England lived at Hever Castle, where Henry VIII’s frequently unannounced visits placed an almost insupportable burden on Anne Boleyn’s mother. Knole was decorated with the cast-offs from royal palaces as a perquisite of office, helping to fill its reputed 365 rooms.

At the other end of the scale are the elegant but more modestly sized houses built and enlarged by men with the proceeds of merchant adventuring, finance or trade. Chilham Castle was built by Sir Dudley Digges who had early links with Virginia and Canada, and St Clere and Squerryes were owned by men who became Governors of the Bank of England.

The date of buildings ranges from twelfth-century Leeds Castle to the twentieth century in the case of Astor’s enlargement of Hever, and the collections reflect both the acquisitions of families over many centuries and the application of great wealth to the quick assembly of items to populate an empty house. In this selection, there is an above average rate of properties rescued, restored and furnished by Americans both wealthy and discerning.

Visits to the smaller houses benefit from private tours, allowing a fuller appreciation of the work required to maintain and sustain a country house in the twenty-first century.

St Clere. Leave central London by coach at 11.15am. St Clere, influenced by Inigo Jones though with two rather anomalous Jacobean octagonal turrets, was built 1628–33 for the Parliamentarian Sir John Sedley. It has been in the current family since 1878 when acquired by the Governor of the Bank of England. Lunch precedes a tour of the house and garden which provides insight into the challenge of making a country house earn its keep.

Knole, Ightham Mote, Boughton Monchelsea Place. Knole sprawls around half-a-dozen courtyards. Built by an Archbishop of Canterbury, it was briefly one of Henry VIII’s palaces before being granted to the Sackville family who have lived here ever since. One of England’s most picturesque moated mediaeval manor houses, the rooms of Ightham Mote range from the Great Hall with stained glass to the drawing room with Chinese wallpaper. Dinner is at Boughton Monchelsea Place, largely Tudor but a perfect example of the delights of gradual accretions and alterations to a mediaeval core.

Hever Castle, Penshurst Place. The castle where Henry VIII wooed Anne Boleyn had become a decrepit farm by the time William Waldorf Astor applied his fortune to its renovation. Now it has sumptuous interiors, outstanding tapestries, Tudor portraits and a mock-Tudor village for guests. For Nikolaus Pevsner, ‘there is no finer or more complete 14th-century manor house than Penshurst Place’. The ancestral home of the Sidney family has fine contents and a garden restored in the 1860s to its appearance around 1700.

Leeds Castle, Squerryes Court. One of Britain’s most idyllically sited houses, Leeds Castle was the strategic fortress of mediaeval queens and palatial enough to host the Holy Roman Emperor. The Anglo-American heiress Olive, Lady Baillie, employed French designers and introduced Flemish tapestries and Impressionist paintings. Squerryes Court is a fine brickwork William and Mary mansion containing artworks collected by the family since 1731. The estate produces wine, and there is a visit to the vineyard. We stay for dinner.

Chilham Castle. The foundations of Chilham date from the 11th century, while the red-brick Jacobean house now on the site has the peculiar plan of five sides of a hexagon. The tour visits the garden as well as the principal rooms. There is some free time in the highly attractive village before returning to central London by 4.30pm.

Hotel accommodation; private coach throughout; breakfasts, 3 dinners, 1 lunch, with wine; all admissions; all tips; the services of the lecturer and tour manager.

Chilston Park Hotel, Lenham: an extended 17th-century manor house set in 22 acres of parkland. Each bedroom is decorated in an individual style; public rooms have an elegant, country house ambiance. Single rooms are doubles for sole use.

The tour involves a lot of walking, where coach access is restricted, and a lot of standing in houses. A good level of fitness is essential. Unless you enjoy entirely unimpaired mobility, cope with everyday walking and stair-climbing without difficulty and are reliably sure-footed, this tour is not for you. Average distance by coach per day: c. 80 miles. 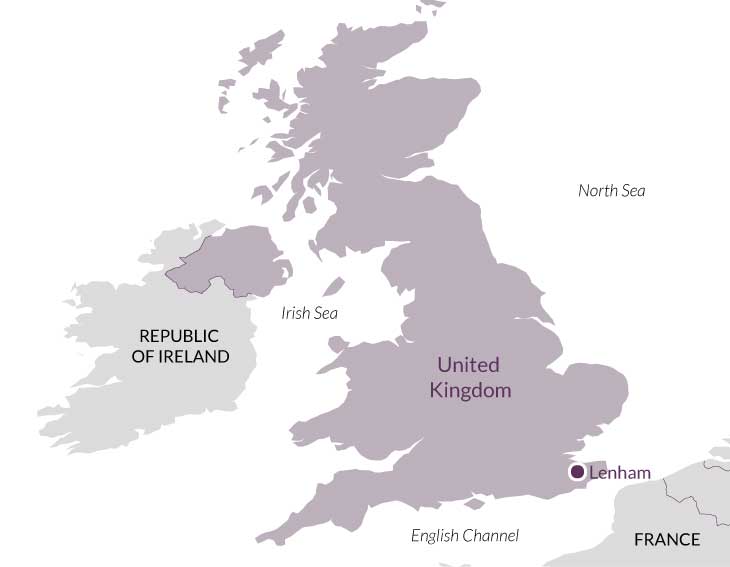 'I was very impressed and also touched by the way all the local guides identified so strongly with the houses they talked about. They weren't just repeating facts - they wanted us to know about the history and greatness of the houses and to see them through enlightened eyes.'

'Anthony Lambert is beyond excellent as a lecturer and as a person. What a gem!'