The most important contests of the first English Civil War.

Some of the most beautiful and least visited battlefields in the country.

Three fine hotels in the heart of England.

Led by a military historian whose background provides unparalleled insights into the politics and the fighting of the period.

Listed in The Telegraph’s 50 greatest art, food and culture holidays on Earth.

What makes this tour stand out is the way that past and present are startlingly linked. For, although it’s more than 350 years since Britain was plunged into the bitter chaos of civil war, the scars still remain: churches whose spires have been shot away or pulled down, earthworks and trenches, gun-damaged walls and ramparts, mass graves – all of these sites are still there to be seen if you know where to find them. These, of course, are only the physical signs of strife; the constitutional and emotional fault-lines still affect our daily lives.

In England and Wales 85,000 men were killed in battle while another 127,000 people died of war-related disease or starvation. Yet from slaughter and regicide came our Parliament, our democracy and the bastions of society – the monarchy, the church, the tenets of our law, our navy and our army. Less positively, though, the embers of hatred, which flare to this day in parts of Ireland, were fanned by the events that we’ll be examining.

Three major battlefields of the First English Civil War are visited, Edgehill in Warwickshire, Marston Moor in Yorkshire and the Crown’s final defeat at Naseby in Northamptonshire. But we’ll see far more than these sites as we walk over sconces and redoubts, ravelins and lunettes in some of England’s most beautiful and best-kept secret countryside. We’ll see how York was ravaged, reveal Oakwell Hall’s Civil War connections, see Newark Castle, Lincoln Cathedral and the very ground where the New Model Army won its spurs, as well as a host of smaller battles and skirmishes – the anvils upon which modern Britain was forged.

Siege of York. The tour begins at 2.00pm at the hotel in York with a walk to see the sites of the siege and capture of the city. In April 1644 Scots and Parliamentary troops besieged the Royalist garrison until 1 July when the city was relieved by Prince Rupert of the Rhine. But Rupert was defeated the next day at the decisive Battle of Marston Moor, and the siege resumed until the city was surrendered with the ‘honours of war’ on 16 July. Overnight York.

Battle of Adwalton Moor. In the morning we will focus on weaponry at Oakwell Hall, before commencing our investigation of the battlefield. In June 1643 the Earl of Newcastle marched a vast force of 10,000 Royalist troops towards the Parliamentarian stronghold of Bradford. In defence of the town, Lord Fairfax advanced with 3,500 men and the two armies met on Adwalton Moor. The overwhelming number of Royalist pikemen eventually forced the Parliamentarians back, the Royalist cavalry completing the victory. This rout guaranteed the King control over most of northern England until the next year. Overnight York.

Battle of Marston Moor, the biggest battle ever to be fought in Britain. Having taken York on 1 July 1644, Prince Rupert sought to destroy Parliament’s much larger forces. He should have attacked earlier but was dissuaded and during the day both sides gathered their full strength on Marston Moor, west of York. The Scots Covenanters and Parliamentarians launched a surprise attack. After a melee lasting two hours, Cromwell’s troops drove Royalist cavalry from the field whilst Leven’s infantry wiped out what remained of Rupert’s infantry. Overnight Lincoln.

Battle of Winceby, Lincoln. In October 1643, Henderson, the Royalist Governor of Newark, took Horncastle from a detachment of Fairfax’s troops. Determined to reverse this, Parliamentary cavalry met their enemies in what became the almost entirely mounted battle of Winceby. Still early in his military career, Cromwell feigned a retreat, lured the Royalists onto flat ground and then charged home. We will see where Cromwell himself was unhorsed, where his troopers smashed the Royalist Horse and the bloody aftermath. In Lincoln Cathedral, examine its Civil War and other military monuments. Overnight Lincoln.

Sieges of Newark. The wonderful old market town of Newark was besieged three times in the Civil War. First, briefly, in 1643, after which it was dashingly relieved in 1644 by Rupert before becoming the scene of King Charles’s surrender in 1646. Spectacular earthworks still exist and we’ll visit the new National Civil War Centre, see the site of a mass grave and recreate the final months of the King’s reign in this atmospheric setting. Overnight Stratford-on-Avon.

Battles of Edgehill, Cropredy Bridge. The first pitched battle of the War, in October 1642, Edgehill was designed as a knock-out blow by the King against the main Parliamentary army. It ended inconclusively and condemned the country to four more years of strife. At Cropredy Bridge, things were more clear cut in June 1644. After several reversals earlier, Charles’s troops captured 11 guns from the Parliamentarians and crushed Waller’s forces. We’ll tread in the king’s footsteps and see how his cause was reinvigorated at this crucial point. Overnight Stratford-on-Avon.

Battle of Naseby. The last pitched battle of the war, Naseby proved to be Charles’s final throw of the dice, his first and last chance to shatter the recently created New Model Army. In June 1645 Charles and Rupert chose to stand and fight; initially things went well with Fairfax’s Parliamentarians falling back. But Cromwell turned the tide; his Dragoons manoeuvred brilliantly and Rupert’s own Bluecoat Regiment were depleted as they formed the rearguard for the Royalist army and for Charles’s last hope of victory. Coach to Northampton railway station arriving c. 1.30pm.

Included: private air-conditioned coach; hotel accommodation as described below; breakfasts, 4 dinners and 2 lunches with wine or beer, water and coffee; tips for restaurant staff and drivers; the services of the lecturer.

We stay in three fine hotels in the heart of England. The Grange, York: ten minutes’ walk from the Minster, décor and furnishings combine period and modern in this converted Georgian town house. The Castle Hotel, Lincoln: a luxury hotel in Lincoln’s historic quarter, close to the cathedral. The Arden Hotel, Stratford-upon-Avon: a comfortable waterside hotel situated opposite the RSC theatres.

There is a considerable amount of walking (up to 2 miles) each day (both Marston Moor and Naseby also include modest hills) and quite a lot of standing – for up to 60 minutes – in exposed spots. Average distance by coach per day: 65 miles. 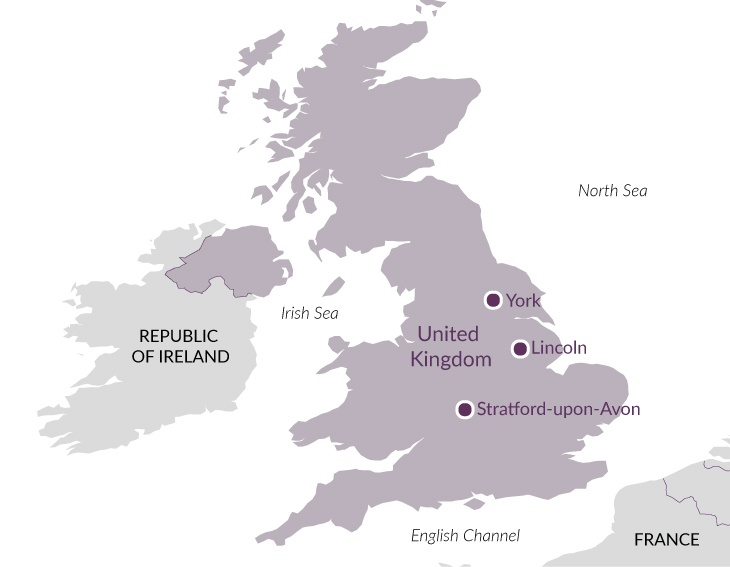