A vibrant panoply of archaeology, history and art​ in both south and north. ​

Ancient cities and tombs, churches and monasteries, forts and castles – a legacy of occupations and influences spanning millennia.

Two nights in the Troodos mountains, with its remarkable Byzantine frescoed churches.

A rich and magical island of sunshine, scenic beaches and magnificent mountains, Cyprus affords the opportunity to delve deep into the histories of both Europe and the Middle East. The third largest island in the Mediterranean, after Sicily and Sardinia, it is culturally the most diverse of the three, with the earliest history.

Every great power from antiquity to the present day has set foot and left a mark, often using the island as a stepping-stone for imperial conquests: the Assyrians and Persians, the Greeks and Romans, the Anglo-French monarchs and crusader knights, Ottoman sultans and the British army have all made homes here, thereby recognising Cyprus’s vital position in the East Mediterranean and the wider world.

This fascinating tour explores the layers of civilisation which have created Cyprus. It examines the oldest traces of human presence through artefacts found at Khirokitia, the early Mycenaean trading centres at the west end of the island, and even the remaining evidence of the Persian occupation that occurred in the fifth century bce.

In the Greco-Roman world, Cyprus was renowned as the birthplace of the great cosmic goddess Aphrodite; locals still identify a cove near Paphos as the place where she arose from the foam (Greek aphros) of the waves. A cult devoted to her was established in Kato Paphos, where a sanctuary to Apollo is also found, as well as the​ monumental remains of late Roman cities with their spectacularly colourful well-preserved mosaics.

Hellenistic burial sites and early Christian basilicas demonstrate how Cyprus has welcomed successive and diverse occupants. The tiny painted churches and monasteries of the Troodos Mountain Range are unesco gems. Dating to the Byzantine occupation, each is a masterpiece of Orthodox art and each has its own character and style – a feast for the eyes and balm for the soul. The Troodos is also home to Kykkos monastery, still a functioning religious site, with a magnificent collection of sacred icons. Indeed, icon painting was a hallmark of Cypriot life (and remains so) and you will discover a myriad of magnificent examples in the brilliant museums that dot the island.

When Richard the Lionheart conquered Cyprus in 1190, the island became the centre of the Latin Church in the East. The French Lusignan dynasty ruled for over 300 years, establishing vast fortified castles and mountain-top palaces, as well as exquisite Gothic-style cathedrals. These were subsequently taken over by the Venetians who left their mark on cities such as Nicosia and Famagusta, until they too were replaced by the Ottomans when, inevitably, churches and cathedrals became mosques as Islam was brought to the island.

The tour also explores the realities of living in a divided island and we will spend our time visiting the sites of both Greek-speaking southern Cyprus and the Turkish territory of the North. We will examine the British presence here until 1963 and the results of the 1974 hostilities. Yet in spite of the troubles, the indigenous people of Cyprus, whether Greek- or Turkish-speaking, retain pride in being Cypriots. Their rich multi-lingual dialect is testimony to the depth of history that flows through their veins.

Paphos. The monastery of Ayios Neophytos was founded in the 12th century by the recluse and writer Neophytos. Byzantine paintings cover the cave that he carved out of the mountainside. Several 16th-century icons can be viewed in the church, constructed on the site much later. Of the one hundred graves that were once found at the misleadingly named Tombs of the Kings, only nine remain. The majority of Paphos’ UNESCO listed archaeological park dates from the Roman period. The afternoon is dedicated to arguably Cyprus’ most impressive mosaics, restored and sheltered from the elements under modern wood constructions.

Paphos. Today is spent in Ktima where the city’s best museums can be found. These include the excellent District Archaeological Museum and the Byzantine Museum, notable for the 13th and 14th-century icons, as well as a ninth-century icon of Agia Marina, considered the island’s oldest.

Paphos to Kalopanayiotis. En route to the ancient city kingdom of Kourion, we pass Episkopi, one of two British sovereign territories on the island. The earliest remains found at the extensive archaeological site date from the Hellenistic period (325–50 bc), although evidence suggests the city kingdom was founded by the Argives of the Peloponnese. We spend the afternoon in Limassol (Lemesos), visiting the fort and castle, originally an early Christian basilica rebuilt in the 16th century under Ottoman rule. Local folklore claims the castle’s chapel as the location for Richard the Lionheart’s wedding to Berengaria de Navarre. Head north into the Troodos mountains for the first of two nights in Kalopanayiotis.

Troodos mountains. The Troodos mountain range is famous for its collection of Byzantine churches and monasteries, still in use today. With unprepossessing exteriors, the painted interiors are a revelation. The frescoes are in varying states of preservation, some having been partially removed or destroyed during later expansions. In stark contrast to the modest rural churches, the lavishly decorated Kykkos monastery is one of Cyprus’ wealthiest. The complex is home to one of three icons attributed to Apostle Luke.

Kalopanayiotis to Nicosia. Leave the hotel on foot to explore the nearby Agios Ioannis Lambadistis church and icon museum. Drive across the Mesaoria plain towards the southern capital, Nicosia (Lefkosia, Lefkoşa), divided by the Green Line. We spend the afternoon at the Cyprus Museum, housing the most extensive collection of Cypriot antiquities worldwide (due to the building’s capacity, only a small amount of the collection can be on display). First of three nights in Nicosia.

Nicosia. The morning is spent at the excellent Byzantine Museum, showcasing amongst others some 230 icons dating from the ninth to the 19th century from churches across the island. The museum also brings to light the issue of preservation of cultural heritage, as some items on display originated in churches in the north that have since been recovered (and restored) through donations. Visit the Leventis Municipal Museum of Nicosia in the Old City, of particular importance is the Caterina Cornaro gallery. The A.G. Leventis Gallery, a separate institution on the outskirts of the capital, displays key Cypriot art, with a focus on the events of 1974 and the consequences felt by the Greek Cypriots.

St Hilarion, Kyrenia, Bellapais. Cross the border for the first time into the Turkish occupied north of the island. St Hilarion, a 12th-century castle strategically located among the Pentadaktylos (or Kyrenia) mountains, is claimed to have inspired King Ludwig II’s Schloss Neuschwanstein in Bavaria. Continue via Kyrenia (Girne) castle to Bellapais, immortalised by Lawrence Durrell. Here a 13th-century church and 14th-century cloister were added to the original Augustinian monastery. Return to Nicosia for a walking tour of the north, including Buyuk Han, Selimiye Mosque, crossing the border to the south on foot.

Salamis, Famagusta, Larnaca. The ancient coastal city of Salamis lies to the north of the border, near Famagusta (Gazimağusa). Christians rebuilt sculptures and archways throughout the former Cypriot capital following a fourth-century earthquake. Large parts of the city remain unexcavated – a further example of the differing attitudes of the north and south towards cultural heritage. Founded following the destruction of Salamis, Famagusta, now the northern capital, was the island’s most important sea port before 1974. Fly from Larnaca to London Heathrow, arriving c. 6.00pm.

Chair in Ancient History at Cardiff University and Director of the Ancient Iran Program for the British Institute of Persian Studies. He has spent extensive time in Iran, and is a specialist in the histories and cultures of ancient Iran, the Near East and the Classical World. He has often appeared on the BBC, Channel 4, in The Times and other media outlets. His books include Creating a Hellenistic World, Ctesias’ History of Persia: Tales of the Orient and Designs on the Past: How Hollywood Created the Ancient World. A new book, The Persians, will be published by Wildfire in 2022. Instagram: @lloydllewellynjones

Air travel (economy class) on scheduled flights with British Airways (Airbus A320); travel by private coach; hotel accommodation as described below; breakfasts; 2 lunches and 6 dinners with wine, water and coffee; all admissions to museums and sites; all tips for restaurant staff, drivers and guides; all state and airport taxes; the services of the speaker, tour manager and a local guide.

A busy tour involving a lot of walking on archaeological sites. Uneven ground, irregular paving, steps and hills are standard. There is also a lot of standing in museums and churches. The roads in the Troodos mountains are winding and may prove difficult for those suffering from motion sickness. Average distance by coach per day: 59 miles. 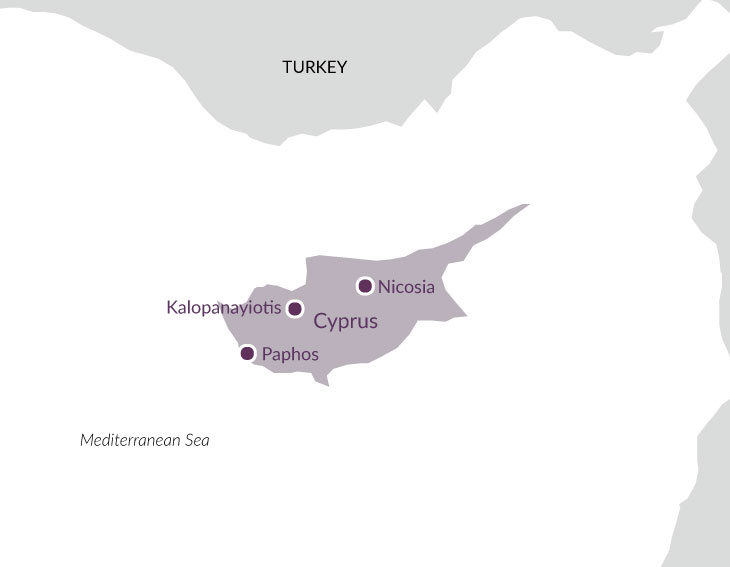