Privileged access to royal residences and gardens, some not generally open to the public.

Based in Copenhagen and Elsinore (of Hamlet fame), with an excursion by ship to Sweden.

This is an opportunity to appreciate North Sealand’s natural environment and its architectural highlights, in particular where the two artfully combine in a series of beautiful gardens. A special ingredient of the tour is the opportunity to meet some of those involved in their planning, planting and conservation.

Stretching from Copenhagen to Elsinore, thirty-five miles to the westernmost shore of Øresund, the Danish Riviera is celebrated for the quality of its produce (it is also known as ‘Denmark’s kitchen garden’) as well as for its beaches, woodlands and attractive fishing harbours. The region is also home to the country’s greatest royal residences. Their interiors and art collections are as impressive and fascinating as the landscapes and gardens in which they are set.

An outward looking attitude is traceable in both Danish architecture and horticulture. Dutch Renaissance, Italian Baroque and French Classicist styles are easily detectable influences in the properties visited. Kronborg, Frederiksborg and Rosenborg castles, built under the patronage of King Christian IV (r. 1588-1648), are cases in point. Scandinavia’s longest reigning monarch pushed through an extensive civic programme that reflected his cosmopolitan outlook and economic aspirations for Denmark, and included the foundation of new towns and ports and the enlargement of the royal shipyards as well as monumental residences for himself.

Rosenborg Palace was begun in 1606 as a summer pavilion and stylistically is Dutch in inspiration. A plan of 1649 shows how Renaissance principles also governed the design of the gardens, created both for pleasure and for provisioning the royal household with vegetables, fruit, fish and flowers. Large-scale conservation projects have recently been implemented here, and also at Frederiksborg and Fredensborg, respectively palace and hunting lodge built for Frederik IV (r. 1699–1730). Mile-long lime alleys have been renewed, parterres replanted with historically accurate specimens, fountains and pavilions restored and pathways returned to their original tracery.

In contrast to these grandiose schemes, there are more modest and modern gardens too. Given to Copenhagen in 1983 by the shipping magnate A.P. Møller, Amaliehaven is on the site of a shipyard and faces the opera house across the water. Strandpark Hellerup is a public park laid out in 1912 to the pioneering design of G.N. Brandt, Denmark’s leading landscape architect and gardener of the time.

Our lecturer, Margrethe Floryan, is curator of Copenhagen’s Thorvaldsen Museum, the creation of the Neoclassical sculptor Bertel Thorvaldsen (1770-1844), and has written books on gardens and garden history.

Copenhagen. Fly at c. 10.00am from London Heathrow to Copenhagen (Scandinavian Airlines). Walk to Rosenborg Palace, royal residence from the early 17th to the late 18th century in the heart of Copenhagen. It is set in the King’s Garden and contains original furnishings as well as the Crown Jewels and the royal regalia. The garden features lime alleys, historic pavilions and a sunken rose garden. First of three nights in Copenhagen.

Copenhagen. Walk via Frederiksstaden, a waterfront district built by Frederick V in 1748 to commemorate the tercentenary of his family’s ascent to the throne. Home to many Danish monarchs since the 1760s, Amalienborg is an exceptional complex of four matching Rococo palaces around a public square, the finest of its kind outside France. Christiansborg Palace, on the site of Copenhagen Castle, is seat of the Danish Parliament and is used today for Queen Margrethe’s public audiences and other state events. Overnight Copenhagen.

Copenhagen outskirts. Situated on the waterfront, the gardens at Hellerup are renowned for their roses and reflect the adoption of British planting schemes of the early 20th century. Bernstorff Palace is an exquisite mid-18th-century French-inspired manor house, later acquired by the Royal family. Accompanied by the head gardener, we explore the extensive landscaped grounds, with orchards, vines and a historic rose garden, before lunch. Visit the Hermitage in Jægersborg Deer Park, recently restored to its 17th-century glory, and still used by the Danish court. Overnight Copenhagen.

Elsinore. Drive along the coast from Copenhagen to Elsinore. Visit the commanding Renaissance castle of Kronborg, long a symbol of Danish power due to its position on the narrow strait between Denmark and Sweden. The newly restored Baroque gardens at Fredensborg Palace (the present royal couple’s favourite) represent the summit of the French tradition in Denmark. The private garden, orangery and kitchen garden are at their peak in July, and we meet the head gardener. First of three nights in Elsinore.

North Sealand. The Renaissance Frederiksborg Castle was restored after a fire in 1859 and now houses the National Museum of History (500 years of paintings, portraits and furniture). Italian and French influences lie behind the cascades and richly ornamented parterres of the gardens. The Marienlyst Palace and Garden trace their history to the 16th century. Optional visit to the famously beautiful Louisiana Museum of Modern Art in Humlebæk. Overnight Elsinore.

Sofiero (Sweden), North Sealand. Take the ferry between Elsinore and Helsingborg to visit Sofiero Palace, which for more than a century was one of the Swedish Royal family’s country mansions. The garden has more than 500 rhododendron varieties. Free afternoon in Elsinore, which became rich from taxes on shipping, as the medieval churches and convents testify. Opened in 2014, the shipyard has been transformed by Bjarke Ingels Group as a cultural complex including a Maritime Museum. Overnight Elsinore.

Copenhagen. Drive back to Copenhagen. The view from Frederiksberg Palace stretches over the sea. Italian Mannerist villas are the source of inspiration for the layout of this early 18th-century royal palace, but a century later the scheme also accommodated winding waters, meandering paths and Classical and Chinese garden pavilions, to which we have special access. Some free time in the afternoon, perhaps to explore the garden of the Royal Danish Horticultural Society. Return to Heathrow c. 7.30pm.

Flights (Euro Traveller) with Scandinavian Airlines (Airbus 320); travel by private coach; hotel accommodation as described below; breakfasts, 4 dinners and 1 lunch with wine, water and coffee; all admission charges; all tips for restaurant staff and drivers; all airport and state taxes; the services of the lecturer and tour manager.

There is quite a lot of walking and standing in museums. Average distance by coach per day: 21 miles. 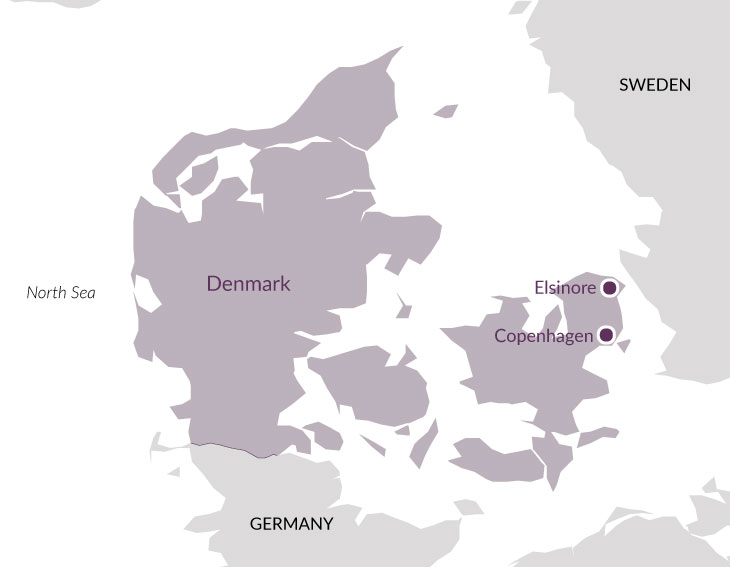