Most journeys are by train, some through outstanding scenery, some on historic railways, some steam traction likely.

Hotels in Newcastle and York beside stations.

It’s arguable whether any previous event had a more transformatory impact on the lives of inhabitants of this island than the coming of the railways. But whatever else could be suggested – the Norman Conquest, the Henrician Reformation – would be of merely local significance: the British invention of railways went on to change the lives of much of the population of the world. This tour examines the beginnings of this extraordinary development, of which there are surprisingly many physical remains, many visually stunning, many still in use.

It is commonly but erroneously believed that railways were a Victorian phenomenon. The fact is that the first inter-city passenger service dates to the reign of William IV, the first public railway to use steam locomotives opened under George IV, the first viable steam engines were built while George III was still king, the first major railway bridge opened during the reign of George I, the earliest stationery steam engines started pumping while a Stuart, Queen Anne, was still on the throne and the earliest documented wagonways in England take railway history back to a Tudor, Elizabeth I. Victoria’s reign saw massive extension of the the railways, but not its genesis.

The scale of pre-twentieth-century railway engineering is almost inconceiveable, especially given the limited mechanical aids available. Digging, blasting, tunnelling, embanking, bridging; thousands of navvies and skilled artisans employed on each major project; carving up the countryside, thrusting cacophonously into towns and cities, absorbing great wealth, yielding even greater riches, creating a vast penumbra of supporting businesses. A couple of the railway companies were for a while the world’s biggest public companies (one of many world records which will pepper the lecturers’ commentaries). Railways transformed the world, transformed the way we live and think and imagine. And it all began in the North of England.

Impelled by the need to transport coal and ore from mine to wharf, Tyneside and vicinity became the crucible in which the assorted ingredients of the modern railway were finally fused together. Connecting inland Manchester with coastal Liverpool was an incentive on the other side of the country; London, soon to be the world’s biggest city, was irrelvant to the story in these pioneering years.

While plenty of twentieth-century developments are seen in passing, the focus is earlier. Though engineering and technology are of course central to the tour, much of the input from the lecturers is about social and political context, financial and economic factors and architectural and artistic matters. A number of attractive towns and cities are visited, and there are some splendidly scenic rail journeys.

Newcastle, Tanfield. Drive at 2.00pm from the hotel in Newcastle the few miles to the Tanfield Railway. With a claim to be the oldest working railway in the world, it opened in 1727 using gravity and horse power on wooden rails. Part of this extraordinary engineering enterprise was the Causey Arch, the world’s first railway bridge and the widest span in Britain for 30 years. Join a train at Andrews House Station and alight at Causey before returning. First of two nights in Newcastle.

Beamish, Shildon. By coach to Beamish, the North of England Open Air Museum, where the world’s finest collection of working replicas of early steam engines (Locomotion, Steam Elephant, Puffing Billy) plies the Pockerley Waggonway. The Shildon branch of the National Railway Museum is on the site of the engine works of the Stockton & Darlington Railway; among the many exhibits is Timothy Hackworth’s Sans Pareil, runner-up in the Rainhill Trials of 1829. To avoid rush-hour road congestion, the last leg is by rail from Durham. Overnight Newcastle.

Newcastle, Darlington. Visually dramatic and historically important, the bridges spanning the Tyne includes R. Stephenson’s innovatory High Level Bridge for both road and rail (1845–9). There is some free time in Newcastle, which has the most impressive late Georgian architecture of any regional city, good Victorian buildings and art galleries. Drive to the Head of Steam Museum in Darlington whose prize exhibit is George Stephenson’s Locomotion which inaugurated the Stockton & Darlington in 1825. First of four nights in York.

North Yorkshire Moors Railway. By coach to the attractive market town of Pickering, the terminus for the North Yorkshire Moors Railway. Planned by G. Stephenson and opened in 1846, it was a victim of the Beeching cuts but was brought back to life as a heritage railway using vintage rolling stock and engines. Travel for an hour (by steam maybe) through exceptionally lovely countryside to Grosmont. After lunch, return to Pickering for a little free time. Overnight York.

Manchester, Marple. By rail to Manchester. The Liverpool & Manchester Railway opened in 1830 and the original station, the world’s oldest, survives. Castlefield has an extraordinary, Pirenesian conjunction of viaducts and canals, including the pioneering Bridgewater Canal (1761). A semi-rural afternoon near Marple outside Manchester along the towpath of the Peak Forest Canal to see the beautifully engineered flight of locks and astonishing 100 ft-high aqueduct (1800) across the River Goyt; the adjacent railway viaduct is even higher. Overnight York.

Settle-Carlisle Railway. ‘The most spectacular piece of railway engineering in Britain’, the Settle-Carlisle Railway (built 1869–75) traverses the moorland hills of the Yorkshire Dales. Twice last century it faced closure, but it survives as England’s most scenically exciting rail journey. Today’s itinerary: by train via Leeds to Settle, train to Ribblehead, walk around the viaduct and lunch, continue by rail to Kirkby Stephen, and then do the journey in reverse without stops except at Leeds. Overnight York.

York. The National Railway Museum at York is the world’s greatest such collection, possessing hundreds of engines, rolling stock and miscellaneous items – royal carriages, Mallard, a replica Rocket and many other fascinating treasures. The lecturer finishes his tour by the end of the morning. As you are only a few minutes from the hotel and York Station you leave when you want.

Included: Travel by private coach; first class rail travel where available, otherwise standard class; hotel accommodation as described below; breakfasts; 3 lunches and 5 dinners with wine, water, coffee; all admissions; all tips; all taxes; the services of the lecturer and tour manager.

Crowne Plaza, Newcastle: a new 4-star hotel on the site of the Stephenson Works in Forth Street next to the station. The Principal York Hotel, York: a 5-star hotel built beside the station in 1878 by the North Eastern Railway, recently refurbished and rebranded by the Principal Hayley group. Single rooms are double for single use throughout.

Days start between 8.40 and 9.30am and most finish at the hotel 5.30–6.30pm, so not a strenuous schedule. There is quite a lot of walking including steps and short hills, so not suitable for people unused to daily walking and stair climbing. The option for keen walkers of a two-mile moorland walk at Ribblehead requires stout footware. 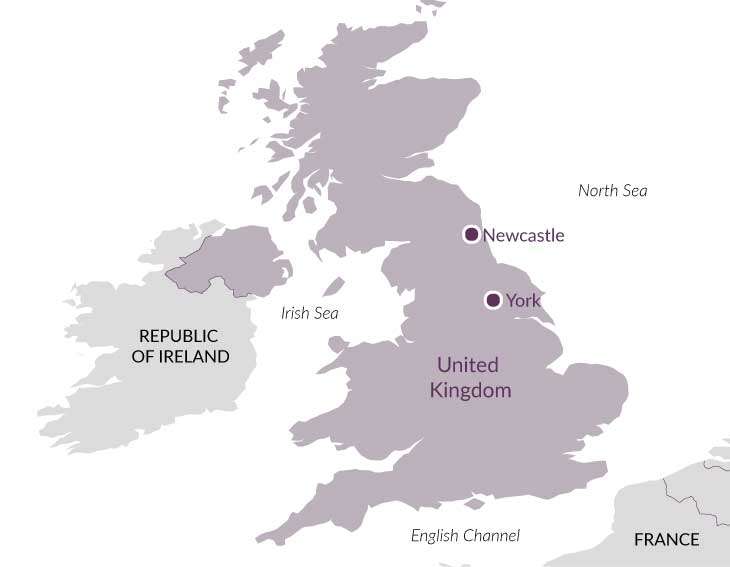