Connoisseur’s Pompeii - Food, wine and archaeology in the Bay of Naples

Visit the major sites of Pompeii and Herculaneum, but with a focus on how the Romans ate and drank.

Special arrangements to see inside some houses and shops not usually open to the public.

Food and wine were at the heart of Roman life. In the Bay of Naples we can follow every step of the process: the vineyards where grapes were grown and pressed; the bakeries in which bread was baked; the corner shops where food and drink were sold; the kitchens where feasts were prepared; the dining rooms where the food was consumed; not forgetting the latrines in which waste was disposed of. And as if that were not already enough, the Romans loved to decorate their walls with images of feasting and of the varied foodstuffs. It was an experience that verged on the religious, and images of Dionysus or Bacchus, the god of wine and intoxication, encouraged them as they drank.

There are plenty of standard tours of Pompeii and Herculaneum, but this one aims to follow the theme of food and drink, from antiquity to the present. We see how an ancient vineyard worked, and then compare it to a modern vineyard on the slopes of Vesuvius. We look at villas not just as museums of fine art, but places where the richness of the soil was exploited. We look at frescoes and vessels in the Naples archaeological museum, not just to admire their art, but to re-imagine their use in the great banquets which formed the culmination of a Roman day.

We visit both town and country. Both Pompeii and Herculaneum open up a world of shops, bars and inns as well as grand houses with fine dining rooms. But the country villas, especially the villa at Boscoreale and the Villa of the Mysteries, take us back to how the wine was produced. And the continued tradition of wine and food production in the area means that we can ourselves eat and drink like Romans.

Fly at c. 8.15am from London Heathrow to Naples (British Airways). Drive to the hotel in Herculaneum, where all three nights are spent.

Herculaneum. Herculaneum has spectacular town houses, such as the house of the Stags, decorated with images of fruit, nuts and dates. It was a busy fishing port in antiquity, and a fishing boat is preserved in the museum. The heat of the eruption carbonised foodstuffs – see loaves, as well as grains, figs, lentils and much else. Lunch is at a modern winery on the slopes of Vesuvius. The villa at nearby Boscoreale has an antiquarium which is dedicated to the theme of agriculture, food and wine.

Pompeii, Altripalda. Since its first exploration during the 18th century, Pompeii has been one of the world’s most celebrated archaeological excavations. It is famous for its bakeries, bars and inns, and its houses with richly decorated dining rooms. See also the villa of the Mysteries, which shows both the wine-making process and the celebration of wine in the great frieze of the mysteries of Dionysus. Attached to the villa there were also vineyards, which have been excavated and reconstructed, and replanted by a leading Campanian wine-maker. Visit these before driving to the wine-maker’s enoteca for a tasting.

Naples. The Archaeological Museum in Naples has one of the finest collections in the world, and is the principal repository for both the small finds and the best-preserved relics discovered at Pompeii and Herculaneum. It contains numerous frescoes and mosaics (excavated before the 20th century), and a wide range of the objects of daily life, from the pots in which they cooked to the elaborate silver vessels which graced the best dinner parties. Fly from Naples to London Heathrow, arriving c. 9.45pm.

Flights (Euro Traveller) with British Airways (Airbus 320); travel by private coach, and some travel by train; hotel accommodation; breakfasts; 2 lunches and 2 dinners with wine, water, coffee; all admissions; all tips; all taxes; the services of the lecturer and local guide where required.

There is a lot of walking on this tour, some of it over rough ground or through vineyards, or up and down steps in wine-cellars. There is a lot of standing in museums and on archaeological sites. Sure-footedness is essential. Average distance by coach per day: 34 miles. 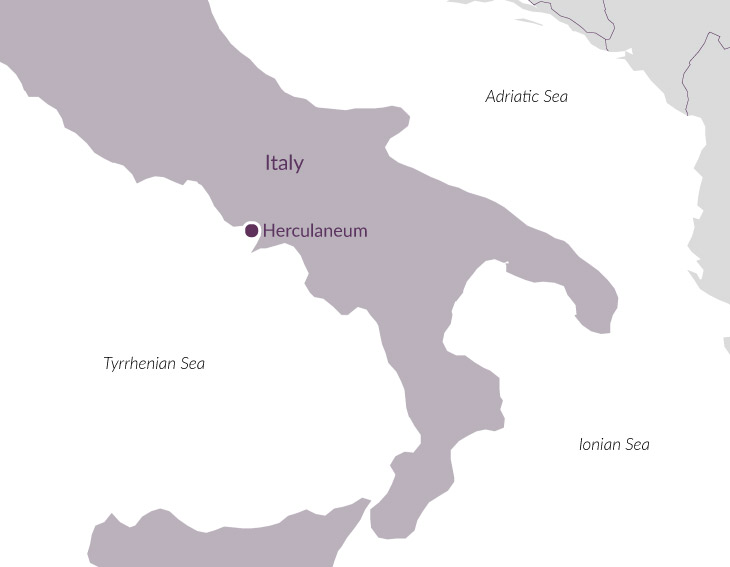