Tiepolo is a recurrent theme and the tour is based in Udine where he worked early in his career.

Cumbersome by name, complex by history, the region of Friuli–Venezia Giulia is tucked within the north-eastern borders of Italy and bound by Austria, Slovenia, the Veneto and the Adriatic. Much of the region was ceded to Italy by Austria only after the First World War; a border dispute with Yugoslavia rumbled into the 1970s. Understandably, it is marked by variety – ethnic, linguistic, cultural, gastronomic and topographical.

The south and centre consist of a broad alluvial plain whose glistening fecundity is fed by rivers descending from the Julian Alps and the Dolomites. The mediating foothills produce some of the finest white wines in the world. Populous and prosperous, there are many towns with historic kernels where virtually every period of Italian art and architecture is represented, from Roman to modern. Some of the early mediaeval buildings are particularly striking and important – Aquileia, Grado and Cividale.

There is much fine Renaissance painting and architecture: Palladianism was the dominant creed for a couple of centuries after Palladio’s death, and in addition to painters who established themselves in Venice there are several lesser-known figures of talent who are not well known outside the region. Painting reached another climax in the eighteenth century as Tiepolo spent the years of his early maturity in Udine.

Udine is the base for the tour. A lively city, it has an extensive historic centre with a succession of enchantingly picturesque streets and squares and a central piazza as fine as almost any in Italy. The other big city visited is Trieste, for centuries the principal Austro-Hungarian outlet to the sea and one of the most important ports in the Mediterranean.

If combining this tour with The Venetian Hills, the tour finishes at Venice airport where you wait for the rest of the group before continuing to Udine.

Fly at c. 2.00pm (British Airways) from London Gatwick to Venice. Drive to Udine where all five nights are spent.

Udine. In Udine, visit the main piazza with its Gothic and Renaissance loggias, and the cathedral, basically Gothic but much augmented later. The main theme is Tiepolo, the greatest painter of the 18th century, who created several major works in the cathedral, the Oratorio della Purità and the Archbishop’s Palace. A hillock at the centre is the site of the castle, an imposing 16th-century residence housing the art gallery, a fine collection of paintings by artists from the region. See also S. Maria di Castello, the oldest church in Udine, and S. Giacomo with its Renaissance façade.

Aquileia, Grado. See two of Italy’s best early medieval churches, the Basilica at Aquileia, rebuilt in the 11th century but retaining a 4th-century mosaic floor, and S. Eufemia at Grado with mosaics, pulpit and silver altar frontal. Aquileia was a major Roman city and seat of the patriarchate while Grado was its outer port.

Trieste. On the way to Trieste, visit Miramare Castle. Completed in 1860 by Archduke Maximilian of Habsburg for his wife Charlotte of Belgium, it preserves their memory and identity. Before 1919 Trieste was the principal seaport of the Habsburg Empire and the busiest port in the Mediterranean, and its broad straight streets and 19th-century buildings have a distinctly Viennese cast. After a troubled 20th century its fortunes have revived since 1989, demonstrated through grand seafront architecture. Towering above, the ancient Capitol has remains of the Roman forum, castle and the cathedral of S. Giusto, an agglomeration of buildings from the 5th century onwards with Byzantine mosaics. Also see ceramics dating from the middle ages to the nineteenth century in the Museo Sartorio, as well as the civic museum of history and art.

San Daniele, Spilimbergo, Sacile. In the morning visit Villa Manin, residence of the last Doge of Venice, Ludovico Manin. The Renaissance frescoes by Pellegrino di San Daniele in the church of Sant’Antonio at San Daniele are the finest in the region. Spilimbergo has a Gothic cathedral with 14th-century frescoes, and a castle courtyard with painted façades. The cathedral of Sacile perfectly reflects the influence of the Republic of Venice in its architecture and interior decorations.

Cividale. Cividale is in the hills bordering Slovenia. Founded by Julius Caesar and capital of the first Lombard duchy in Italy, the Tempietto Longobardo possesses the finest 8th-century sculpture to survive in Europe. Fly from Venice, arriving at London Gatwick at c. 6.30pm.

We are happy to advise on linking accommodation and transport.

Flights (Euro Traveller) with British Airways (Airbus 319); travel by private coach; breakfasts; 3 dinners with wine, water, coffee; all admissions; all tips for waiters, drivers; all taxes; the services of the lecturer and tour manager.

Astoria Hotel Italia, Udine: a well established four-star hotel in one of the principal squares of the centre of town.

The tour involves quite a lot of walking, some of which is uphill and some of which is in the town centres where vehicular access is restricted. Streets are often cobbled, and the tour should not be attempted by anyone who has difficulty with everyday walking and stairclimbing. Some days involve a lot of driving. Average distance by coach per day: 53 miles. 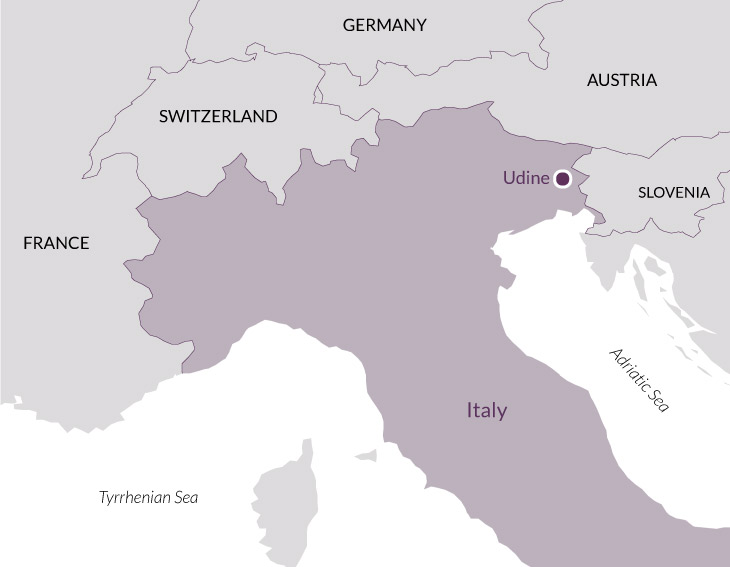 'The lecturer was well informed and interesting. It was a pleasure to listen to someone who enjoyed seeing the art and the buildings, and whose comments were thoughtful and illuminating.'

‘Dr Carlo Corsato not only knew his subject intimately, but was also a good communicator and most congenial company.’

‘Lecturer Carlo Corsato was enthusiastic, full of knowledge and interesting ideas – and was always very approachable.’

‘To have excellent coverage from Roman to Rococo was very special.’