Private gardens are a feature throughout.

Set among rolling hills between the northern Welsh borders and the Peak District, in a landscape scattered with picturesque villages of half-timbered houses, are some of the finest gardens in England. Some are traditional creations that have been lovingly restored, others are exciting new ventures that show how the art of English garden-making is flourishing in the 21st century. Many are seen by special arrangement.

With its strong structure and rich planting, one of the most beautiful of the new gardens has been created by Lesley and John Jenkins around the 16th-century, timber-framed Wollerton Old Hall. North-south and east-west axes divide the four-acres into a series of Arts & Crafts inspired ‘rooms’ exploring scale, formality and colour – from the simple greens of the Lime Allee and Font Garden to the controlled exuberance of the hot garden.

The Royal Horticultural Society’s Tatton Park Flower Show, now in its 20th year, is firmly established as the top garden show in the North. The sumptuous floral marquee features some of the best growers in the country, and includes summer plants not seen at other shows. Small Back to Back Gardens, Show Gardens and Future Gardens sections offer inspiration from new and upcoming designers.

While Trentham Hall was demolished in the 1930s, the structure of its expansive Italian garden, originally laid out in the 19th century and set within a ‘Capability’ Brown landscape, remained intact. The original structure implemented by Charles Barry is bordered with David Austin roses. It has recently undergone a contemporary revival under the direction of Tom Stuart Smith, winner of numerous gold medals at Chelsea, whose distinctive style of clipped forms with naturalistic groupings of soft grasses and flowers, has brilliantly transformed it. Adjacent to this are the Rivers of Grass and Floral Labyrinth, designed by acclaimed Dutch plantsman and designer Piet Oudolf (responsible for the High Line in New York), while the most recent addition to the ensemble is the meadow created by Nigel Dunnett, the designer behind the Olympic Park plantings.

Wollerton, Hodnet, Chester. The coach leaves from Stoke-on-Trent Railway Station at 1.00pm for Wollerton Old Hall. Set against the architecture of the house, the garden is the evolving project of the present owners who took it on in 1984. Nearby Hodnet Hall’s 1920s English landscape garden in a lakeside setting and has lovely planting beside the stream that feeds it. First of three nights in Chester.

Adlington, Abbeywood. Adlington’s half-timbered Great Hall (built between 1480 and 1505) is surrounded by a sunken garden, rose garden and a 17th-century landscape garden, which follows a stream through a designed wilderness. An ornamental area of experimental prairie planting is particularly attractive, thanks to a wonderful backdrop of rolling Cheshire countryside.

Arley. Arley Hall gardens were mainly laid out in the late 18th century by Roland and Mary Egerton-Warburton. The beautiful walled garden leads to the first double herbaceous border created in England, with its backdrop of buttressed formal hedging and yew topiary. After lunch at The Gardener’s Kitchen, return to Chester for some free time.

Tatton Park, Rookery Hall. Today is dedicated to the Tatton Park RHS Flower Show. After the show drive to Rookery Hall Hotel for the first of two nights. Tickets are confirmed in Autumn 2019.

Biddulph. Biddulph Grange is the life’s work of Victorian plant collector James Bateman. His collection is arranged by the geographical region from which the specimens originate, their settings embellished with architectural features. During renovations of Biddulph Old Hall, the current owners stumbled across archives describing a 19th-cent atmospheric woodland and water garden that was being created by the then owner, the Pre-Raphaelite artist Robert Bateman. They have since created a series of enclosed gardens at the Hall to capture the spirit of Bateman’s earlier garden.

Trentham. In an inspired move, Trentham Estates commissioned Tom Stuart Smith, to replant the historic Italian garden to reflect contemporary ideas, resulting in one of the largest and most exciting new plantings in Europe. Finish at Stoke-on-Trent Railway Station at c. 2.00pm.

Travel by private coach; hotel accommodation as described below; breakfasts; 2 lunches and 3 dinners with wine, water, coffee; all admissions, private openings, tours; all tips; the services of the lecturer and tour manager.

The Chester Grosvenor: an elegant 5-star hotel in a Grade II-listed part timber building located in the heart of Chester. Rooms are well proportioned. Rookery Hall Hotel & Spa: 4-star country house hotel in the Cheshire countryside. Our spacious rooms are in the Old Hall which retains some period charm.

There is a lot of walking. Coaches can rarely park near the houses; many of the gardens are extensive, with uneven ground or steps to reach different levels.  Average coach travel per day: c. 56 miles. 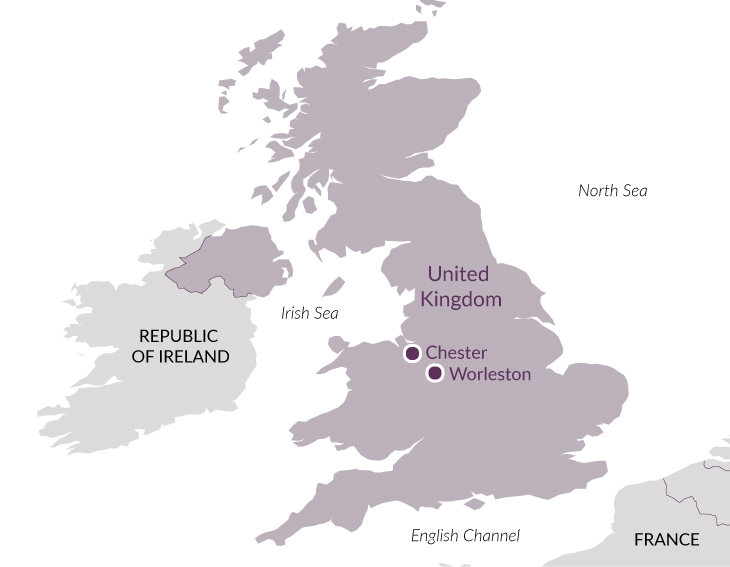