Garden and landscape designs of internationally-renowned Piet Oudolf and the Dutch Wave.

Beautiful new-perennial planting that is at its best in September.

Utrecht is one of the best-preserved historic cities in the Netherlands; Zwolle’s moated medieval centre is charming.

Since the beginning of the twentieth century, the Netherlands has been at the forefront of a new direction in planting design, in which a more naturalistic approach to planting, using perennials and ornamental grasses and known as The Dutch Wave (and latterly the New Perennial Movement), has quietly been gathering momentum. Two significant Netherlanders have been at the heart of this movement; Mien Ruys and Piet Oudolf. Oudolf, inspired by Mien’s earlier work, has become the most significant and acclaimed landscape designer working within this genre, and visits to several of his designed public spaces are a major feature of this tour.

The English origins of the naturalistic planting movement flourished in the form of the Victorian plantsman William Robinson whose book, the Wild Garden, is still in print 135 years after first being published. His friend, Gertrude Jekyll, shared his ideas and added colour theories learnt from the Impressionist painters in her acquaintance. These ideas proved to be highly influential to a young Dutchwoman, Wilhelmina (Mien) Ruys, who was raised at the famous Moorheim nursery in Dedemsvaart. Here, her father experimented with propagating new forms of perennial plants, making these available to the wider public as demand increased through the writings of Robinson and Jekyll.

Mien’s interest however lay not in producing plants but in using them. After meeting Jekyll in England, she studied at the Bauhaus in Germany before embarking on a lifetime of experimentation with perennials, mixing the naturalism of Robinson, the painterly qualities of Jekyll and the clean lines she had learnt from Modernism to create something that was not only original but has also proved to be a continuing inspiration for designers today.

“It all begins with Mien” says Piet Oudolf of the influence Mien Ruys has had on contemporary planting design. Oudolf, now in his early seventies, began creating gardens in the 1970s and, frustrated at the difficulty of acquiring enough plant material for his work, started a nursery to grow the plants he needed to meet his own demand. Through a small group of like-minded artists and growers, ideas began to emerge around the appeal of seedheads and ornamental grasses, extending the season of interest in a flower border beyond the traditional 6-week flowering period, into a style where form takes precedence over flowers and colours. Resulting in a more naturalistic planting, the style complements both contemporary urban spaces and country gardens.

Piet’s work has spread far beyond his native Dutch borders in the creation of the High Line in New York and the Lurie Garden in Chicago, but more importantly, has opened a wider debate on the value of naturalistic planting within garden and urban settings.

Amstelveen, Utrecht. Fly at c. 11.45am (British Airways) from London Heathrow to Amsterdam Schiphol. Visit the Jac P Thijssepark, a suburban oasis of water and woodland, beautifully designed with native plants in the 1930s to create one of the first examples of a stylised natural landscape. Drive to Utrecht, for the first of three nights.

Rotterdam, Voorlinden, Utrecht. Largely destroyed in the Second World War, Rotterdam has emerged as a centre of post-modern architecture. Piet Oudolf has been responsible for designing three very different public spaces within the city. The Leuvehoofd features Oudolf’s painterly planting in triangular beds that step down to the river; the Westerkade forms part of the revitalisation of the quays with a new cobblestone tree-lined esplanade; the Ichtushof is a magical wooded courtyard space created on a pedestrian route in an urban setting. In the afternoon visit the gardens that surround the Museum Voorlinden, a contemporary art gallery where walls of glass blur the lines between art, architecture, and nature. Created by Oudolf in 2016, the gardens are planted on mounds that add to the experience of immersion. Overnight Utrecht.

Utrecht, Vianen. The landscape surrounding the Miele Inspiration Centre in Vianen (2008) has been designed with grasses and late-season perennials adjoining large pools for rain water harvesting, and fountains for noise abatement. Free time for lunch in the small historic town of Vianen. The Vlinderhof, a large new garden (2014) within Utrecht’s Maxima Park designed by Piet Oudolf, originated from an initiative by local residents and is maintained by them. Overnight in Utrecht.

Utrecht, Laren, Zwolle. The morning and early afternoon are left free for independent exploration of Utrecht. In June 2018 a new garden designed by Piet Oudolf was created at the private Singer Laren museum to showcase the sculpture collection. This most recent of Oudolf’s public works expands on earlier work here which included the forecourt and roof garden. First of two nights in Zwolle.

Dedemsvart, De Wilp, Zwolle. In the morning visit the Mien Ruys Experimental Gardens. From 1924 until her death in 1999, Ruys created a series of 30 gardens trialling different planting schemes and architectural ideas. Ahead of her time, the gardens are still as fresh and inspirational as when she first conceived them. This afternoon’s garden shows the influence of the American prairies on the Dutch Wave, whose native plants formed the basis of the movement’s palette. Lianne’s Siergrassen is a private nursery with parterre garden created solely using grasses, and a large experimental prairie garden.

Hoorn. Spectacular drive over the 20 mile long Houtribdijk which spans the IJsselmeer lake separating Flevoland from North Holland, home to numerous sea birds. Visit to a beautiful private country garden that combines inspiration from Mien Ruys and Hidcote, creating a ‘Modernist’ garden of rooms where water plays a key role. Some free time for lunch in Hoorn, one of the main ports of the Dutch East India Company, before continuing to the airport. Fly from Amsterdam Schiphol and return to Heathrow at c. 6.00pm

Flights (Euro Traveller) with British Airways (Airbus 320); hotel accommodation; travel by private coach; breakfasts; 1 lunch and 4 dinners with wine, water and coffee; admission to museums and galleries; all tips; all taxes; the services of the lecturer and tour manager.

The Grand Hotel Karel V, Utrecht: 5-star hotel converted from a 19th-century hospital in a quiet location within the city walls. Grand Hotel Wientjes, Zwolle: 4-star hotel, formerly a mansion, close to historic city centre. Single rooms throughout are doubles for sole use.

There is quite a lot of walking and some of the gardens are extensive with uneven ground. The tour would not be suitable for anyone with difficulties with everyday walking and stair-climbing. There are some long coach journeys but facilities are good. Average distance by coach per day: 75 miles. 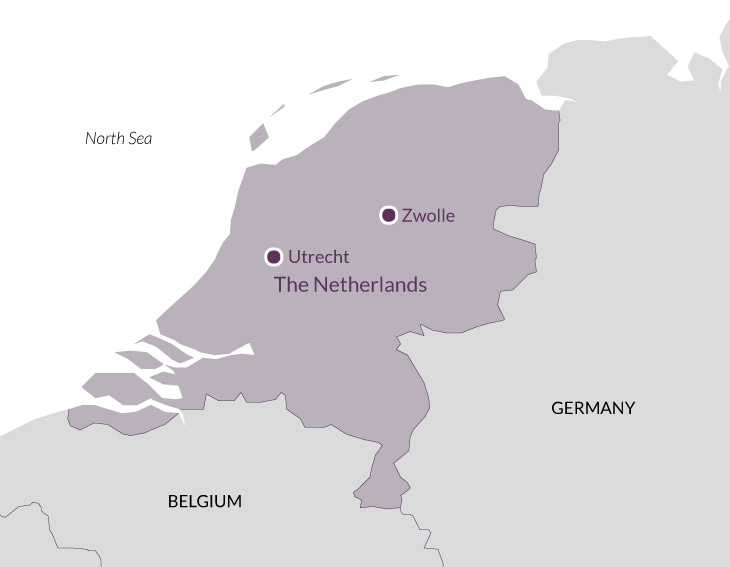