Gardens of Sintra - Lisbon and the Portuguese Riviera

Stay throughout in Sintra in an 18th-century palace; meet owners and park directors of the town’s romantic country estates.

In Lisbon, visits to the extensive greenhouse Estufa Fria and the gardens of the Palácio dos Marqueses de Fronteira.

The Serra de Sintra. A small range of granite hills to the north-west of Lisbon, they occupy the westernmost point of continental Europe, jutting out into the Atlantic. It is this proximity to the ocean that defines the gardens of Sintra and allows them to luxuriate with year round verdure. This brings too the sweet poetic air and soft rosy light of the setting sun. Gardens have been made here by the Romans and the Moors, by the Portuguese re-conquerors and discoverers, and by merchants enriched by the diamonds and gold of Brazil. These gardens have been described by poets, travellers, diplomats and soldiers from the Peninsular campaigns.

In the nineteenth century Sintra became the centre for Portuguese Romanticism which celebrated this rich history and wild landscape. This in turn engendered a new round of garden-making which sought to emulate the cosmopolitan influences of the Portuguese discoveries and Moorish heritage. Palaces were built in the decorative style of the 16th-century king Dom Manuel, but were soon accompanied by others whose looks belied the links with India, Arabia and China. Their gardens were filled with exotic plants from Brazil, Australia, South Africa and Mexico, transforming the terraces of Moorish orchard gardens into sub-tropical forests and extravagant floral paradises.

Opera set designer at La Scala, Luigi Manini, is the architect of one of Sintra’s most extravagant buildings, the Quinta da Regaleira. But the Romantic capabilities of Sintra are not exhausted by this giant folly. The wooded hills reveal, one after another, the most extraordinary richness and concentration of amazing gardens: Sir Francis Cook’s Monserrate, once described as the world’s largest greenhouse; Ferdinand Saxe-Coburg Gotha’s gardens surrounding the Pena Palace that have transported the Black Forest to Portugal; the contemporary gardens of Quinta da Alegria inspired by the owner’s former garden in the South of France; and our hotel the Palácio de Seteais, built by the richest man of his day, holder of the Crown Monopoly of Brazilian Diamonds.

Participants combining with Polyphony in Portugal

The festival ends on Friday 27th May. Transfer to Lisbon by coach (c. 2 hours). We can book a hotel on your behalf but your two nights here are independent.

Lisbon, Sintra. Fly at c. 11.15am from London Heathrow to Lisbon (TAP Portugal). Festival participants join at the airport. By special arrangement, visit an 18th-century noble garden decorated extensively with exquisite azulejos. Continue to our hotel in Sintra, an elegant former palace with gardens that retain 18th-century features. All four nights are here.

Queluz, Lisbon. Drive to the royal palace at Queluz. Continuously developed from 1747 until the French invasion of 1807, the garden shows Rococo influences and is filled with classical sculpture from England. In Lisbon, Portugal’s Presidential Residence at Belém became a royal palace in 1726 when acquired and reconstructed by King Dom João V. The gardens contain mythological sculptures, tile panels, cascades, pavilions and an aviary. The Fronteira Palace’s 16th-century garden celebrates Portugal’s victory in the Wars of Independence (1640–1664).

Sintra. Monserrate, an English landscape garden transplanted to southern climes, is full of literary associations and exotic plants: tree ferns, cactus, araucarias, palms, lotus and cycads. Lunch at a private home with one of Sintra’s best gardens; the design owes much to the South of France in its order and harmony, yet is coloured by local conditions and landscape. The idiosyncratic and thoroughly misunderstood garden of Regaleira was created at the close of the 19th century by Luigi Manini for his eccentric patron Antonio Augusto Carvalho Monteiro.

Sintra. The Capuchos Convent is a former Franciscan monastery founded in 1560, famous for extremely sparse living conditions. Hidden in the woods of Pena Palace is the recently restored Chalet da Condessa and its gardens, a refuge for the widowed king Dom Fernando II and an American opera singer. Lunch at the prettiest house in Sintra, with frescoed rooms by Jean-Baptiste Pillement and a magnificent view of the town and its mountain. Free time in Sintra.

By train: London – Paris – Hendaye – Lisbon (overnight): c. 24 hours. Or via Barcelona with a night in a hotel. Contact us for more information.

Flights (economy class) with TAP Air Portugal (aircraft: Airbus 319); travel by private coach throughout; hotel accommodation; breakfasts, 3 lunches and 3 dinners with wine, water, coffee; all admissions; all tips; all taxes; the services of the lecturer and tour manager.

Accommodation in Lisbon after the festival

We can book a room on your behalf at the Hotel Avenida Palace, a 5-star hotel well-placed for visiting the various quarters of the city. Price, per person, for 2 nights including breakfast (two sharing): £240pp. Single occupancy: £400.

A good level of fitness is essential. Unless you enjoy entirely unimpaired mobility, cope with everyday walking and stair-climbing without difficulty and are reliably sure-footed, this tour is not for you. There are steep streets, cobbles and steps. The parks and gardens are extensive with uneven ground and terraces. Average distance by coach per day: 27 miles. 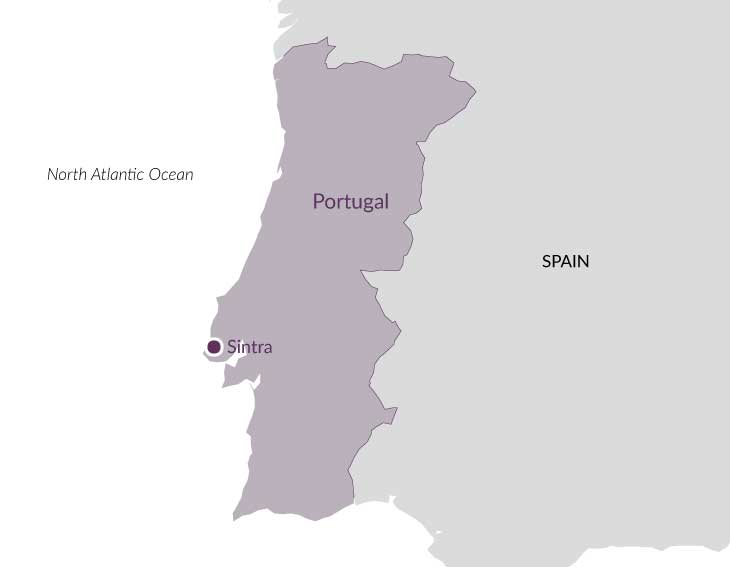 'The Estufa Fria and the Jardim da Quinta dos Azulejos were delightful and unexpected surprises.'

'The visits to the Quinta da Alegria, Quinta da São Sebastião and Monserrate – which were only possible because of Gerald's personal connection – were a highlight, and this made him the perfect guide. His enthusiasm was infectious and he was an able communicator, too.'