Galicia is famed for its abundance of fresh fish and seafood, the quality of meat from its lush inland pastures, and has a burgeoning reputation for excellent wines.

A captivating region steeped in mythology, with dramatic landscapes from the wild coastline of the Rías Baixas to the soaring hills of the Ribeira Sacra.

Led by Gijs van Hensbergen, art historian and author of books on Spanish art and food.

Menhirs and meigas – the standing stones and the benign woodland witches – are central to Galicia’s spirit world and its world of spirits, where the refined after-dinner liqueurs play a central role in mediating between earth, sea and sky. In the pilgrimage city of Santiago de Compostela we burn the firewater orujo in a ritual queimada to begin a culinary adventure that takes in the fjords of the Rías Baixas, amazing vineyards, freshly caught fish, the world’s most exclusive beef, artisan cheeses and a bounty of organic vegetables.

Up in the hills, the great octopus dish pulpo a feira is prepared for us by the world champion chef who regularly fed Graham Greene and Sir Alec Guinness; a rare paprika-spiced, tender delicacy to nourish us after a long morning in the vertiginous vineyards of the Ribeira Sacra (officially designated ‘heroic’), where pickers scale the mountain terraces in mountaineering harness to harvest their rare crop. Pioneering winemakers are transforming Galicia into an oenological paradise, building on the heritage of the old Pazo, or estate vineyards. Our visits take in a Pazo with one of the greatest gardens in Europe, with a private visit to the country palace. On a more architecturally humble note, the stone drying stores – hórreos – set up high on staddle stones display the genius of popular architecture.

From a shellfish mariscada feast at the end of the world at Finisterre, at which we savour the rare percebes (goose neck barnacles) from the Costa da Morte, we move further south to take in the more benign rolling seas, where Michelin-starred chefs team up with ecological gardeners to produce subtle masterpieces. Galicia boasts some of the finest produce in Spain and a new generation of chefs bring their quirky Celtic genius to the table in cities as ancient and enchanting as Santiago and the meandering medieval streets of Pontevedra. They make up the Grupo Nove, a group of revolutionary Galician chefs who have forged a renaissance in their regional cuisine.

For lovers of authenticity, charm and an almost otherworldly dedication to excellence, Galicia is a gastronomic gold mine. The chefs, proud of their heritage, are only too keen to share tips, show off their techniques and join us in the market as we graze our way south from the Atlantic city of A Coruña, towards neighbouring Portugal.

Santiago. Visit Santiago’s food market with the chef at Abastos 2.0, followed by lunch in his restaurant. The menu changes daily to include the finest produce from the market. After visiting the cathedral, the great pilgrimage destination and a Romanesque masterpiece, a tasting of tarta de Santiago at one of the city’s historic cafés.

A Coruña. Drive north to the coastal city of A Coruña. A stroll along the promenade takes in the 2nd-century Torre de Hércules, the oldest Roman lighthouse still in use today. Visit the Casa Museo Picasso, the former family home containing reproductions of works by Picasso and his father. Lunch is at the Michelin-starred restaurant Arbore da Veira.

Costa da Morte. The ‘Coast of Death’ takes its name from the countless ships to have met their demise on the jagged rocks of Galicia’s western shore. Venture as far as the lighthouse at Finisterre (the end of the world), taking in dramatic coastal landscapes and the charming town of Noia en route. Lunch in Finisterre takes the form of a mariscada, a feast of shellfish including the local speciality of percebes, collected from the treacherous rocks along the coastline.

Carril, Cambados. The Pazo de Rubianes is an 18th-century country palace with extensive vineyards and spectacular gardens. The visit concludes with a wine tasting. Continue to a small, family-run canned seafood factory to sample their artisanal produce. Lunch is at Yayo Daporta (1 Michelin star), whose innovative modern Galician cuisine is based around regional seafood of the highest quality. Continue to Pontevedra for the first of three nights.

Ribeira Sacra, Ourense. Ascend into the hills of the Ribeira Sacra, where vineyards are carved into the steep river gorges. Wine tasting at Abadia da Cova, overlooking the Cabo do Mundo peninsula. Lunch at an award-winning pulpería (octopus restaurant). Afternoon wine tasting at a family-run vineyard in the restored ruins of a 12th-century monastic winery. Dinner is at Casa Solla, one of Galicia’s most famous restaurants that has held a Michelin star since 1980.

Combarro, O Grove. The coastal town of Combarro has many hórreos, traditional elevated stone structures used to store grain and fish. Continue to O Grove for lunch at Culler de Pau, awarded its second Michelin star in 2020. Chef Javier Olleros celebrates local produce by using ingredients that mostly come from within 15 km of the kitchen. Visit an organic vegetable garden that supplies the restaurant before tasting the produce with lunch.

Free morning in Pontevedra. Drive to Porto for the flight to London Gatwick, arriving at c. 8.30pm.

Flights (economy class) with TAP Portugal (Airbus 319, Embraer 190); travel by private coach; hotel accommodation; breakfasts, 6 lunches and 3 dinners (including one light cheese tasting) with wine, water, coffee; all wine and food tastings; all admissions; all tips; all taxes; the services of the lecturer and tour manager.

Parador de Santiago de Compostela: 5-star parador opposite the cathedral, in the former pilgrims’ hospital. Parador de Pontevedra: 4-star parador occupying a 16th-century palace in the historic centre of Pontevedra. Single rooms are doubles for sole use throughout.

Fish and shellfish are integral to nearly every meal. We suggest this tour would not be appropriate for those that do not eat fish or shellfish.

Evening meals tend to begin at 9.00pm and some late nights are inevitable. There is a fair amount of walking on roughly paved streets and standing around at the visits, sometimes on uneven ground in gardens or wineries. There are some long distances travelled by coach, particularly on days 1, 6 and 8. Average distance by coach per day: 95 miles. 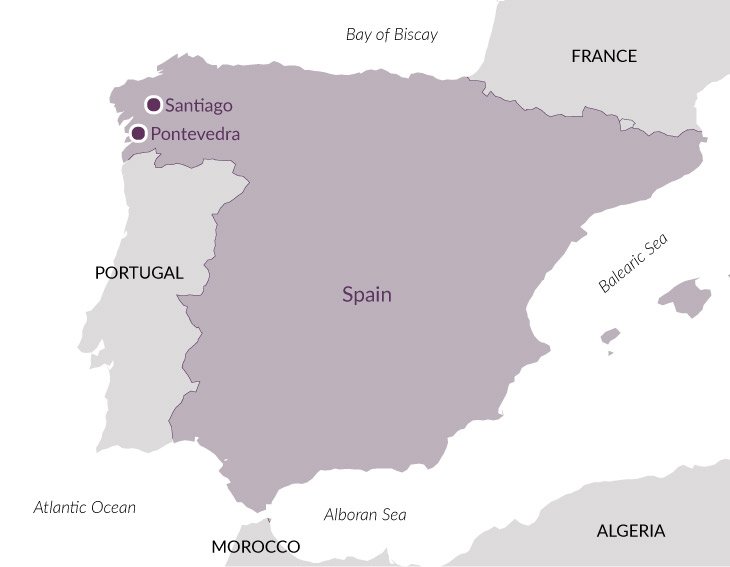