Exploration of food in Spanish history and art.

Contrasts fine dining in Madrid with the rustic fare of Segovia and Castilian villages.

Other regions (Catalonia, Galicia, Basque Country) are well represented, as are the world-renowned wines of Rueda and Ribera de Duero.

Great art at the Prado, Romanesque architecture and the Bourbon palace at La Granja.

Madrid – the nation’s melting pot – is the only place to start a journey through the astonishing variety of Iberian cuisine. Every region has its supper club and its favourite bar in Madrid – its txoko, casa de cultura and home from home. But food means far more than just the pleasure of the table. It sits right at the heart of tertulia culture, with its often passionate and heated debates. From the court to the playhouse, from the nineteenth-century novels of Perez Galdos to the contemporary paintings of Miquel Barceló, food remains the protagonist. Today, Madrid Fusión - the world’s largest avant-garde food symposium - drags us into the 21st century with its action packed presentations on the future of food. And, every famous Spanish chef from the regions is now present with a satellite or a pop-up making their presence felt in a creative gastro-extravaganza.

Spain’s rich and ancient food heritage is civilization on a plate, as it holds up a mirror to its complex historical past. Dishes and flavours send out echoes of Greek, Phoenician, Roman, Visigoth and Moorish cuisine. There is the Passover fare of Sephardic Spain, the subtle Arabian sweetmeats, the austerity of Philip II, the extravagances of the Bishop, marzipan pastries and thyme flavoured honey prepared by the Carmelite nuns, pastas from Naples and the explosion in tastes derived from the new produce of the Americas. In Madrid, Maria Marte, the rising star from the Dominican Republic, has worked up from dishwasher to Michelin 2 star chef in under a decade. Leche de Tigre, ceviches, sharp citric bursts with soothing creamy undercurrents tickle the tongue and surprise us. New World ingredients like the humble potato take on a new appearance with their Peruvian ancestors, stained a deep purple, gold and black. Then there is the hugely popular street food of the religious fiestas held all over Spain, every saint’s day being associated with a different dish.

This tour provides a chance to see some of the dishes of the seventeenth-century table and to steal through its larders courtesy of Velázquez, Zurbarán, Luis Meléndez and Sánchez Cotán. There are tiled Valencian kitchens to see and wonderful examples of Spanish earthenware, majolica and table decorations fit for a king.

The wealth and quality of Spanish food, as is to be expected, rests first and foremost on the quality of its primary produce: the acorn-fed hams of the wild Iberian pig, the truffles from Guadalajara, asparagus from Ávila, vintage sherry from Jerez, giant fava beans from La Granja, extra virgin olive oils from Catalonia, wild herbs from Soria, saffron from Teruel, goose neck barnacles from Galicia and cod cheeks from Bilbao. Madrid is the nation’s larder and the crossing point for all that is both ancient and new: caviar from Granada, artisan conserves, pickled flowers, seaweeds, the best beef in the world and all displayed in the restored nineteenth-century Mercado de San Miguel, just off Madrid’s Plaza Mayor.

North of Madrid, the Sierra de Guadarrama rising to more than 3000 metres provides sanctuary for deer, wild boar, partridge, imperial eagles and wolves as the northern slopes lead us down towards the meseta plains of Castile. High mountain passes are now protected as heritage sites on the famous Cañadas Reales, the royal sheep trails that criss-cross Castile leading north to the distant Pyrenees.

This is the land of the roasts, of sucking pig and milk-fed lamb, where Roman waterways and Moorish irrigation systems are lost in the maquis scrub. Monasteries and convents still sell their produce from behind the privacy of the wooden turno, a revolving hatch. ‘Ave Maria Purissima!’ your password to handpicked artichokes to be later dribbled with convent honey and marzipan treats.

The dry grandeur of the Castilian landscape left some vineyards undamaged when phylloxera hit Spain. Ossian’s vines were planted before the French Revolution and produce a stunning white verdejo – the King of Rueda – long, deep, floral and utterly delicious. The Ribera del Duero – the Golden Triangle – offers masterpieces like Pesquera, Malleolus, Pago de Carraovejas – ambassadors of the tempranillo grape - and the legendary one-off ‘Unico’ Vega Sicilia, all to be tasted and partnered with artisan cheeses, smoked chorizo and farmhouse bread. ‘Que aproveche!’

Fly at c. 11.30am from London Heathrow to Madrid. An olive oil tasting precedes a light dinner in Madrid’s Literary Quarter. First of four nights in Madrid.

Madrid. Morning walk to the Mercado de San Miguel, then visit the 18th-century Royal Palace with varied collections of art and furnishings including frescoes by Mengs, Tiepolo and Giaquinto. Lunch is at Club Allard (2-star Michelin), where chef Maria Marte shows her delicate creativity in a listed modernist building. Dinner takes the form of an evening tapas walk through old Madrid.

Madrid. A visit to the Museo del Prado focuses on food depicted in Goya’s tapestry cartoons and the still lives of Sánchez Cotán, Zurbarán and Melendez. Lunch is at Restaurante Alabaster, devoted to high-quality Galician produce. Free afternoon; we suggest the Reina Sofía Museum, Spain’s national collection of 20th-century art including Picasso’s Guernica. Evening cheese tasting and visit a Gintonería.

Nieva, Segovia. Drive to Nieva for a morning of wine tastings followed by light lunch in a nearby village bar. Continue to Segovia, and in the afternoon visit the cathedral, a soaring Gothic structure. Dinner at Restaurante José María, serving Segovia’s famous suckling pig. First of three nights in Segovia.

La Granja de San Ildefonso, Segovia. Walk through the formal gardens of the mountainside Bourbon palace before tasting the beans of La Granja. Show cooking and lunch at La Matita, a family-run restaurant specialising in game.

Peñafiel, Sepúlveda. Drive out into Castilian countryside where Peñafiel’s crusader castle dominates the landscape of ‘The Golden Triangle’. A vineyard visit and wine tasting are followed by a visit to a local cheese producer. Sepúlveda is one of Castile’s best preserved meseta towns with Romanesque churches and cliff-hanging Jewish quarter. Typical wood-fired roast lamb lunch. Return to Segovia for some free time before a final farewell Castilian dinner.

Turégano. Morning visit to the ancient fortress town of Turégano, before a tasting of Vega Sicilia and other legendary great wines. Late morning departure for Madrid Airport, arrive Heathrow at c. 6.30pm

Flights (Euro Traveller, economy class) with Iberia (Airbus 320); travel by private coach; hotel accommodation; breakfasts; 6 lunches and 4 dinners with wine, water, coffee; all wine and food tastings; all admissions; all tips; all taxes; the services of the lecturer and tour manager.

NH Palacio de Tepa, Madrid: a small and excellently located 5-star hotel. Rooms are comfortable and décor is contemporary. Hotel Real Segovia, Segovia: 4-star hotel located next to the cathedral and the aqueduct. Single rooms are doubles for sole use throughout.

There is a fair amount of walking on this tour, some of it uphill. Lunches tend to be lengthy and substantial. 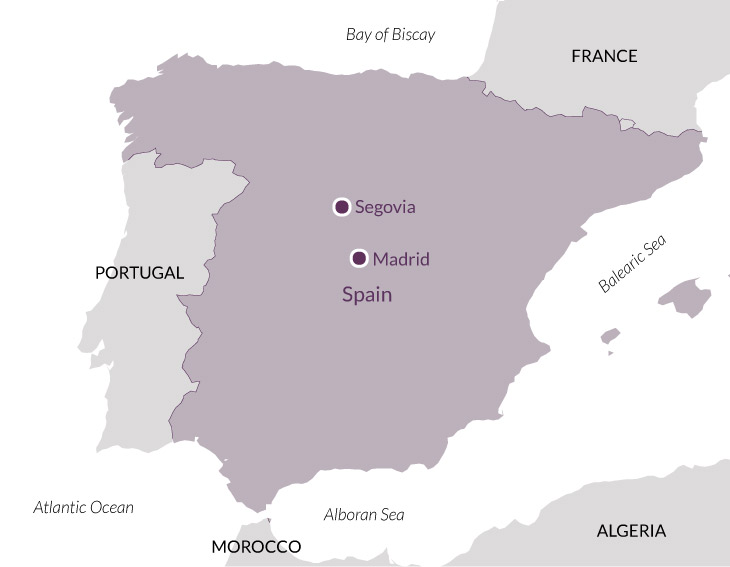