The best country houses in East Anglia and the East Midlands, outstanding examples from the end of the Middle Ages to the Victorian era.

The Tudor and Stuart age is particularly well represented, as is the Palladian style.

100% of participants rated this tour as excellent the last time it ran.

Why is Britain the locus classicus of the country house? Wealth is a precondition of their erection in the first place, and by and large there was a sufficiency. Geography has been kind in allowing agricultural prosperity, and we pass through places key to the Agricultural Revolution of the eighteenth century which further enhanced what Nature provided. The financial benefits of Britain’s primacy in trade and industry seeped into stately piles. Relative peace and absence of foreign occupation, preference for primogeniture, a reluctance to revolt, a fruitful balance between the power of the monarch and the rights of the nobles: all these have been factors in the creation and maintenance of country house culture. Many of the houses on this tour have been in the same family for several generations.

The broad spread of this tour, East Anglia and the East Midlands, allows for the inclusion of some of the very finest country houses in England. If all you ever see of eighteenth-century England are Houghton and Holkham, they will suffice to shine in the memory forever as the epitome of restrained grandeur and elegant opulence. Burghley is the most elaborate and monumental of Elizabethan great houses, Blickling the most beautiful of Jacobean, Belton the most perfectly proportioned of the Restoration period.

There are also several brilliant, if less mainstream, masterpieces. Layer Marney Tower is little more than a Tudor gateway, but what a gateway, the highest such in Britain. Felbrigg is not much more than a large-scale manor house, albeit an exceptionally handsome one, but it is one element in an enchanting ensemble which includes walled gardens, Italian paintings and a remote location. The Queen’s private estate at Sandringham will impress with its quietly regal interiors despite pretensions to be unexceptional. Deene Park will captivate with the depth of its history and the authenticity of its atmosphere.

A feature of the tour is the opportunity to spend a little time in some of the loveliest towns and villages in England – Lavenham, Norwich, Stamford. And then there is the ravishing countryside, East Anglia with its broad undulations, big skies, fens and bosky vistas, and the rolling farmland and magnificent trees of the ‘Dukeries’.

Layer Marney (Essex). The coach leaves Witham Railway Station at 2.00pm. Layer Marney Tower is an apposite first visit: the seven-storey gatehouse is a final flamboyant fling of the Middle Ages, while its Renaissance ornament is harbinger of the classicism which dominated English architecture for the next 400 years. First of three nights in Lavenham (Suffolk).

Audley End, Lavenham (Essex, Suffolk). Audley End was the most ambitious house to be built in the reign of James I but was later reduced, altered and re-Jacobeanised, revealing both changes in taste and styles of country house living. Delicious Robert Adam rooms and park landscaped by ‘Capability’ Brown. In the later afternoon explore the abundance of mediaeval and Elizabethan houses in Lavenham and its superb parish church. Overnight Lavenham.

Ickworth, Melford (Suffolk). Ickworth is almost as eccentric as its builder, the 4th Earl of Bristol (a bishop), a glorious Neo-Classical rotunda attached to curving wings intended to accommodate art and antiquities acquired on his incessant travels. Visit Melford Hall, a house largely built in the 16th century, with beautiful Edwardian gardens and fountain. Overnight Lavenham.

Norwich, Holkham (Norfolk). Stop for a while at Norwich, an exceedingly attractive county town with castle and cathedral. With Holkham Hall (1730s) the English country house reached a moment of perfection, the serene Palladian edifice contrasting with the ‘natural’ layout of the deer park. Within are magnificent classical halls and a collection of paintings, sculpture and furniture of staggering richness. First of two nights in Norfolk.

Felbrigg, Blickling (Norfolk). Felbrigg Hall is a lovely 17th-century house whose chief glory is the suite of rooms arranged in the 18th century to display paintings collected on the Grand Tour. Jacobean Blickling Hall is one of the loveliest of English country houses, red brick with stone dressings and mediaeval sprawl constrained by Renaissance symmetry. Among its treasures are a long gallery, library and a variety of art and furnishings, and the gardens are spectacular. Overnight Norfolk.

Houghton, Sandringham (Norfolk). The grandest monument of English Palladianism, Houghton Hall was built for Sir Robert Walpole. There are outstanding artworks, a spectacular walled garden and an extensive park. Sandringham was built for Edward VII when Prince of Wales and now belongs to the Queen. An attractive Jacobean-style mansion set in a landscaped garden, the principal rooms have the glittering opulence of a royal residence despite their intended informality. First of three nights in Rutland.

Boughton, Burghley (Northants, Lincs). Palatial in scale and sumptuously fitted out, Boughton House echoes Versailles (its builder was ambassador to the court of Louis XIV). It has scarcely changed since the end of the 17th century, and sits amid a great estate. The grandest of Elizabethan houses, Burghley was built by the Queen’s chief minister and magnificently remodelled internally a hundred years later. The paintings and furniture are superb. Time is spent in Stamford, one of England’s best preserved historic towns. Overnight Rutland.

Deene Park, Rushton (Northants). Though largely 16th-century, Deene Park feels very different and is still very much the home of the Brudenell family. Full of good things, there is also an enchanting riverside garden. Rushton Triangular Lodge, an Elizabethan miniature, is laden with symbolism. Finish at Northampton Railway Station at c. 3.00pm.

Please note that some appointments are not confirmed until the end of 2017.

The starting and finishing points of this tour are railway stations because it is usually quicker to travel through London by train than by coach.

Hotel accommodation; private coach throughout; breakfasts, 1 lunch and 7 dinners with wine, water, coffee; all admissions; all tips; the services of the lecturer and tour manager.

The Swan, Lavenham (4-star). Dating from the 15th century, The Swan has been an inn since 1667; rooms have been recently renovated yet retain their historical character; excellent restaurant. Congham Hall Hotel, Congham (3-star). Rooms are airy and well appointed with a traditional country house décor; public rooms are pleasant and informal; attractive gardens. Barnsdale Lodge Hotel, Rutland (3-star), housed in an extended old farmhouse close to Rutland Water. Public rooms and bedrooms are arranged around a courtyard and have a traditional, country décor.

Unavoidably, there is quite a lot of walking on this tour and it would not be suitable for anyone who has difficulties with everyday walking and stair-climbing. Coaches can rarely park near the houses, many of the parks and gardens are extensive, the houses visited don’t have lifts (nor do all the hotels). Average distance by coach per day: c. 87 miles. 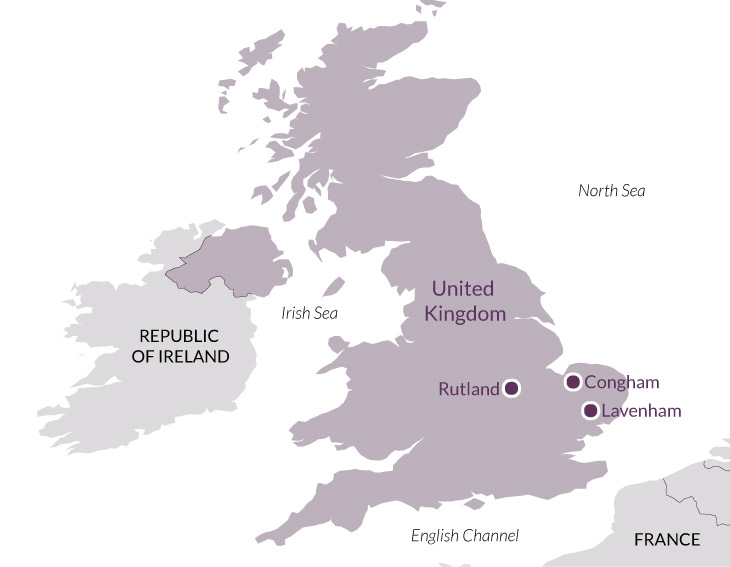 'The choice of itinerary was most interesting and well thought out.'

'The private tours were excellent due to the information available from knowledgeable guides.'

'The houses chosen were and excellent mix. The private, off hours guided tours arranged by MRT impressed us greatly.'