The House of Hanover -

Duchies, Electorate and Kingdom in Germany

Studies the German territories ruled by the dynasty from which came the Hanoverian kings of Great Britain 1714–1837.

Great-grandson of James I and VI, consistently through the female line, George Ludwig Elector of Hanover (1660–1727) might have been fifty-second in line to the thrones of Great Britain at the death of Queen Anne. But a combination of premature deaths and, much more devastatingly, the Act of Settlement of 1702 which barred the throne to Roman Catholics, enabled him to succeed as King George I in 1714. The House of Hanover was to reign in Britain until 1837. This tour travels to the territories the Hanoverians ruled before, during and after this episode.

The Guelphs, or Welfen, are one of the great dynasties of Europe. The attempt of Henry the Lion (1129–95) to bring himself in line for the possible election of Holy Roman Emperor eventually failed, but as dukes of Braunschweig-Lüneburg (since 1235) the family played a decisive role in German politics and patronage of the arts. Both activities were greatly enhanced by Duke, and from 1692 Elector, Ernst August (1629–98) and Duchess Sophie, parents of the future George I.

When George moved his residence from Hanover to London, the sudden loss of the court was a severe blow to arts patronage, but there is still a great deal to see in the area of the former duchies. The erstwhile residences at Celle and Wolfenbüttel have large palaces set in charming cities; the ‘Großer Garten’ at Herrenhausen near Hanover and the landscaped parts next to it rank among the finest in the history of gardening; Braunschweig (Brunswick) has a magnificent collection of old master paintings and bronzes assembled by George I’s cousin.

The tour also includes a number of mediaeval places connected to the Guelphs, as well as some nineteenth-century buildings erected by the then kings of Hanover after the union-by-king of Great Britain and Hanover. The union came to an end in 1837 because the electorate submitted to the Salic law which did not permit a female monarch, and the kingdom became extinct after it backed the losing side in the war between Austria and Prussia in 1866; Hanover was absorbed into Prussia.

Lüneburg. Fly at c.10.40am from London Heathrow to Hamburg then drive to Lüneburg, capital of the eponymous duchy until 1373 when the city expelled the ducal family. See the important town hall with original interiors, St Michael’s Church (where J.S. Bach went to school) and St Johannes (magnificent organ). On the market square is the 1690 dowager palais of Duchess Eleonore (aunt by marriage of George I and widow of the last duke of Braunschweig-Lüneburg, who was succeeded by George I in 1705). Overnight Lüneburg.

Lüneburg, Medingen. Drive south to Kloster Medingen, convent then girls’ school, which burnt down in 1781; George III as Elector of Hanover contributed to the cost of re-building. Drive to Hanover where the remaining five nights are spent.

Hanover, Marienburg. Visit the Historisches Museum, where a permanent exhibition illustrating the development of Hanover over 750 years includes the golden carriages of the Guelfs. Drive out to Marienburg, a strikingly situated castle commissioned by Georg V in 1857 with some good interiors, pictures and furniture. Return to Hanover for a visit to the Landesmuseum, which houses a good collection of paintings from the former royal collection.

Celle. Celle is another of the most charming of smaller German cities with a well preserved centre with much half timbering. The Schloß, residence of the dukes (Lüneburg branch) since the 14th century, has a wonderfully decorated Renaissance chapel and apartments rebuilt by Georg Wilhelm (George I’s uncle) with Italian stucco and a tiny court theatre. See the house and garden used by George III’s brother-in-law, the duke of Mecklenburg-Strelitz, and the church with tombs of George I’s uncles and aunt. Celle also served briefly as residence of George III’s sister Caroline Mathilde.

Herrenhausen. The small Fürstenhaus palace on the Herrenhausen estate is still owned by the Prinz von Hannover (and Duke of Cumberland!) and has good furniture and portraits and one of the grandest complexes of historic gardens in Europe. A vast formal, Franco-Dutch layout was started by George I’s uncle, enlarged by his parents and finished by himself (waterworks). There is also a magnificent orangery with frescoed interiors, a botanical garden and landscaped gardens with the summer house of Graf Johan Wallmoden, illegitimate son of George II. The Welfenschloss was started in 1858 for Georg V but not quite finished by the end of the Hanoverian monarchy in 1866.

Braunschweig (Brunswick), Wolfenbüttel. Drive to territories of George I’s cousins, the dukes of Braunschweig-Lüneburg-Wolfenbüttel. The recently renovated Herzog Anton-Ulrich Museum in Braunschweig has most of the collections of the eponymous duke (died 1714), Rubens, van Dyck, Rembrandt, Vermeer, etc. Schloss Richmond is a delightful villa built in 1768 for Duchess Augusta (sister of George III, mother of Queen Caroline), surrounded by landscaped gardens. Continue to Wolfenbüttel, residence of the Wolfenbüttel branch of Guelf dukes (1432–1753). The town is a very well-preserved with a Schloss of various periods, one of the few major purpose-built Protestant churches (started 1604) and the important and famous Herzog-August-Bibliothek, a library which in the 17th century was perhaps the largest in Europe.

Air travel (economy class) on scheduled flights with British Airways (aircraft: Airbus A319 jet); travel by private coach; hotel accommodation as described below; breakfasts; 2 lunches and 5 dinners with wine, water, coffee; all admissions; all tips; all taxes; the services of the lecturer and tour manager.

There is quite a lot of walking on this tour, some over uneven ground. Average distance by coach per day: 93 miles. 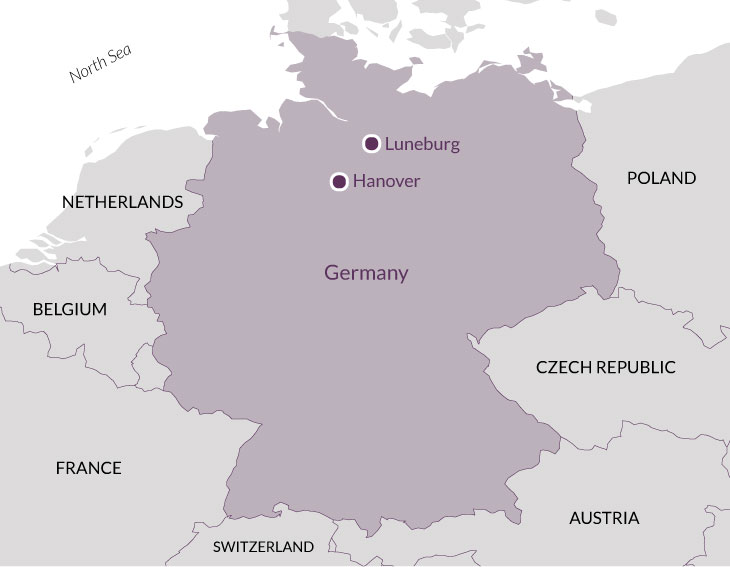