A study of the single most important and controversial set of events in the history of the British in India, a turning point for the Subcontinent and also for Victorian Britain.

A tour of intense interest for military, imperial and Indian history.

The First War of Indian Independence or an ill-planned and illegitimate rebellion? The death-throes of a traditional society slipping beneath the waves of progress or an historic advance towards the emancipation of peoples oppressed by colonialism? The Indian Mutiny, to use the name given by the British upon its outbreak in 1857, has been subject to many interpretations. This tour aims to present a clear-sighted understanding of the events and their meaning, and a moving study of conflict and reconciliation.

In 1857 the Bengal Army, one of the Honourable East India Company’s locally raised armies, turned on its British officers, murdered them and their families or drove them away, and attempted to establish their own authority in Delhi. Newly issued cartridges greased with pig and cow fat, thus alienating both Muslims and Hindus, though rapidly withdrawn, may have precipitated the Mutiny; that it spread so rapidly and enjoyed widespread support reveals deep underlying discontent. Challenged by westernisation, Indian society, rarely at peace with itself anyway, was becoming disorientated and disenchanted.

There followed the most serious challenge to Queen Victoria’s authority of her entire reign. The rebellion sucked in thousands of loyal native troops as well as British regiments – some of them fresh from the Crimea – and plunged the Empire into chaos. The battles were bitter, the destruction enormous and the whole episode complicated by unprecedented inter-tribal and religious violence that looked to the outsider like civil war.

The imperial forces displayed extraordinary endurance and skill, but there were atrocities on both sides as well as acts of great gallantry. Many of Victoria’s military heroes made their names in the Mutiny as the press reported every move of rebels and loyal troops alike. The horror of Wheeler’s Entrenchment at Cawnpore, the dogged defence of the Residency at Lucknow and the storming of the Kashmiri Gate at Delhi still echo through the years.

There are remarkable traces of military engagement surviving in places, and memorials and monuments commemorate the events. Fortuitously, the rebellion spread across some of the most beautiful parts of the country, and the tour provides an excellent overview of Indian landscapes, culture and architecture.

We also follow the path of the most glamorous of rebels, the warrior queen Rani Lakshmibai, from her own Kingdom of Jhansi to the remote and spectacular fortress of Gwalior. She caused the entire Central India Field Force to be pitted against her and only with her death was the fire of unrest finally dampened down.

Old Delhi, the heart of the uprising. Rooms are available from 2.00pm on 23rd October, allowing for early check-in today. Nothing is planned before a pre-lunch talk. In May 1857 rebellious sepoys flocked to Delhi to establish it as the capital of their newly freed nation. The Mutiny Memorial commemorating those killed in action is a neo-Gothic spire with elements of Indian design, built in the local sandstone in 1863. Overnight Old Delhi.

Meerut, the start of the Mutiny. Inspired by an incident near Calcutta, on Sunday 10th May sepoys in the garrison at Meerut began an open revolt. From here the virus spread. Visit St John’s garrison church and the cemetery with graves of that day’s victims. Lunch at a private home. Overnight Old Delhi.

Old Delhi. By early September the besiegers were strong enough to attack and after a week’s vicious fighting Delhi once more came under British control. Visit the sites of some of the battles, including the much-shelled Kashmiri Gate and the British magazine. Walk the route of General Nicholson’s advance (he died while storming the Lahore Gate). Visit the imposing Red Fort, entering via the Lahore Gate where King Bahadur Shah Zafar reluctantly accommodated the Meerut sepoys. Overnight Old Delhi.

Old and New Delhi. The beautiful garden tomb of Humayun, an important example of Mughal architecture, was where Zafar was eventually captured. The Mutiny eventually led to the birth of the Raj. Its new capital was established in 1911 and designed by Sir Edwin Lutyens and Sir Herbert Baker, integrating some Mughal, Hindu and Buddhist elements into the monumental classical buildings of the Viceroy’s House and the Secretariats. Fly to Lucknow; first of three nights at Lucknow.

Kanpur (Cawnpore), betrayal and horror. The garrison commander at Cawnpore, Gen. Wheeler, was besieged by his own native troops in a hastily constructed fort known as Wheeler’s Entrenchment. A visit to this barren, walled area and All Soul’s Memorial Church evokes the dreadful conditions endured by soldiers, civilians, women and children until the rebel leader called a ceasefire. Visit Satichaura Ghat on the Ganges, where Europeans and loyal Indians were permitted to board boats but were promptly fired upon in one of the worst scenes in the Mutiny. Overnight Lucknow.

Lucknow, where the Mutiny ebbed and flowed. The battered Residency at Lucknow: a monument to the fortunes of war. In July 1857 a tiny garrison of British and Indian troops was besieged here until, in September, Sir Henry Havelock forced his way through and, in turn, was assailed. In November Sir Colin Campbell drove the mutineers aside and evacuated the defenders. In March 1858 he returned and finally recaptured the city. See Havelock’s Memorial and the battle-scarred Alambagh Palace, alternately occupied by the rebels and the British. Sikandar Bagh, a pleasure garden of the nawabs, served as a sepoy stronghold. Overnight Lucknow.

Lucknow. There is a special visit to La Martinière Boys’ School, a flamboyant hybrid building of 1796. The principal, masters and boys of the college successfully defended the perimeter of the grounds in 1857. Dilkusha Hunting Lodge still stands nearby despite shelling during the siege. Havelock died here. Much of the day is spent travelling to Orchha for the first of two nights here.

Orchha. Located close to the Betwa River on dramatic rocky terrain, Orchha’s former glory as capital of the Bundela kings is evident in the multi-chambered Jehangir Mahal with lapis lazuli tiles and ornate gateways. The Lakshmi Temple contains 19th-cent. frescoes depicting the defence of Jhansi Fort. Most of the afternoon is free. Overnight Orchha.

Jhansi, scene of massacre and duplicity. The debate still rages over whether Rani Lakshmibai, Queen of Jhansi, knew that the tiny European garrison to whom she guaranteed safe passage were going to be attacked. However their murder led the British to send troops to crush her. Walk along the concentric walls of Shankar Fort where the Rani battled hard against her British opponents in March 1858 before avoiding capture on horseback and riding to Gwalior, a route we travel by coach. Overnight Gwalior.

Gwalior, the Mutiny’s dénouement. Situated on a hill, the formidable fort at Gwalior is lavishly embellished with cupolas and blue tiles; inside are superb 9th- and 11th-cent. temples. Here Rani Lakshmibai held strong with fellow rebel Tatya Tope, until, leading a cavalry patrol, she was surprised at Kotah-ki-Serai in June 1858 (where fortifications are still visible) and killed while the British closed in on the fort from east and west simultaneously. Tatya’s forces disintegrated as the citadel fell – the last battle of the uprising. Overnight Gwalior.

Agra, a decisive engagement. Drive from Gwalior to Agra, a route marked by the dramatic ravines of the Chambal River. Lunch is at a former royal residence at Dholpur. In August 1857 Col. Greathead marched with 3,000 men from Delhi to Agra to recapture the besieged city. The mutineers had been reinforced after Delhi’s fall, but the successful assault prevented the sepoys from linking their forces from central India with those from the rest of Bengal. Overnight Agra.

Agra to Delhi. Rise early to visit the Taj Mahal in the first light of the day. There is a visit to the magnificent Fort. Permanent reminders of the events of 1857 scar this formidable defensive structure – a cannon ball mark on the Sheesh Mahal (Mirror Palace) and the somewhat incongruous but poignant tomb of Col. John Russell, Lieutenant Governor of the Northwest Provinces, who died here in 1857. Drive to Delhi. Overnight near the airport.

Delhi. Car transfers to Delhi airport can be arranged for your onward journey.

Domestic flights with Jet Airways: Delhi to Lucknow; travel by private air-conditioned coach and one journey by train; accommodation and meals as described below, all admissions; all tips; the services of the lecturer, tour manager and local guides.

International flights from London to Delhi are not included in the price of the tour. We will send the recommended flight options when they come into range (by December 2017) and ask that you make your own flight reservation.

Domestic flights with Jet Airways: Delhi to Lucknow, are included in the price of the tour.

Required for most foreign nationals, and not included in the tour price. We will advise all participants of the process.

Oberoi Maidens, Old Delhi: dating to the early 1900s, the Maidens retains colonial charm and is ideally located in the heart of the old city with an attractive garden. Vivanta by Taj, Lucknow: a very comfortable 4-star with spacious public areas and rooms with all modern amenities, surrounded by an extensive garden. Amar Mahal, Orchha: though the rooms are adequately equipped and have air conditioning, this 4-star is the most basic of the hotels on this tour. It is located very near the main sites and has a garden. Taj Usha Kiran Palace, Gwalior: charming 4-star hotel, formerly a private palace, set in 9 acres of land. Rooms combine traditional decor with modern features and are large, light and bright. Trident, Agra: a comfortable, well-run, modern 4-star close to the main sites with a spacious garden. The Leela Ambience, Gurgaon: ideally located near the international airport, this modern 5-star hotel has comfortable rooms.

A good level of fitness is essential. Unless you enjoy entirely unimpaired mobility, cope with everyday walking and stair-climbing without difficulty and are reliably sure-footed, this tour is not for you. A rough indication of the minimum level of fitness required is that you ought to be able to walk briskly at about three miles per hour for at least half an hour, and undertake a walk at a more leisurely pace for an hour or two unaided. Uneven ground and irregular paving are standard.

There are some fairly steep ascents to hilltop forts and temples. Unruly traffic and the busy streets of larger cities require some vigilance. There are some long coach journeys during which facilities are limited and may be of poor quality. Most sites have some shade but the Indian sun is strong, even in the cooler seasons. Average distance by coach per day: 43 miles. 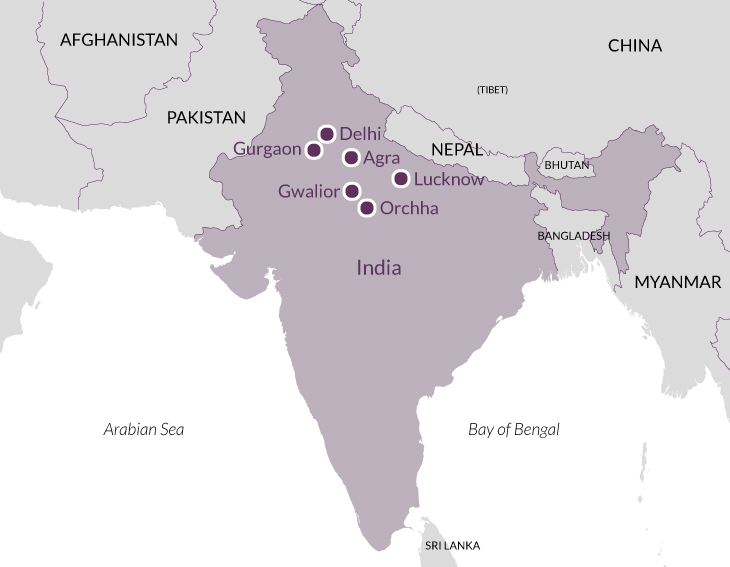 'To combine enjoyment of travel with congenial companions, engage an outstanding lecturer who brings to life the characters and events of the past and to mitigate the disadvantages of travel with research and organisation is to enhance life and is worth more than rubies.'

'For me it was a trip of a lifetime.'

'The lecturer presented a vivid picture of the various confrontations and was well acquainted with the subject.’