A study of the evolution of Japanese gardens through the centuries at the time of striking autumn colours.

From Kyoto’s wealth of exquisite temple gardens to Tokyo’s hill-and-pond gardens with time in each city to explore other aspects of Japanese culture.

Fine examples of ‘borrowed scenery’ at Nara, with its Buddhist temples and deer park, and Hikone Castle on the eastern shore of Lake Biwa.

Japanese gardens possess an aura of timelessness, against which background the cycle of the seasons unfolds its pageantry. Throughout the 1,600-year-old Japanese tradition of creating gardens, the chief consideration has consistently been the depiction of a landscape. This approach to design was firmly established with the earliest gardens built in Japan during the fifth and sixth centuries under the expertise of architects and artisans from Korea and China, who introduced their scholarly taste for the elegant pond garden. From the continent, a variety of sacred landscapes deriving from Buddhist as well as Chinese religious cosmographies entered Japanese culture; Mt. Sumeru, the centre of the universe according to Buddhist legend, has frequently been represented through the centuries, as have been the Taoist Islands of the Blessed Immortals.

Above all, the Japanese took the Chinese tradition of landscape gardens and transformed it into an expression of their love for their own native natural landscapes. Verdant mountains sloping down to the sea; waterfalls and streamlets; rugged shores and shingle beaches; an ever-varying coastline of inlets, coves and jutting promontories – these have always provided a beloved subject matter. Trees and shrubs are carefully selected and arranged to create a seasonal palette, while ponds symbolise the sea, and the rocky outcrops set in them reflect the self-image of the Japanese as an island people.

The idea of landscape links together the two major types of Japanese gardens: the pond garden, on the one hand, and the rock garden on the other, a style that emerged during the fifteenth century, in which serene and contemplative spaces are enhanced by the symbolic representation of water through the use of gravel. In the latter half of the following century, the great tea master Sen-no-Rikyu sought to reproduce the ambience of forest glades for his tea rooms. Lack of space has never been considered as an inhibiting factor, and through the judicious choice and symbolic placing of stones and plants, beautiful panoramic vistas have been created in the tiniest of gardens.

This tour presents a variety of superb gardens from all periods of Japanese history, from the aristocratic ‘paradise’-style temple gardens and the enigmatic Zen Buddhist rock gardens of Kyoto, to the borrowed castle scenery at Hikone and the tea gardens of Kanazawa, to the amalgamation of all these various styles in the imposing gardens of the samurai elite in Tokyo. It offers an insight into the symbolism incorporated into the various styles and the opportunity to appreciate the relationship of gardens to the Japanese way of life.

Tokyo. The tour begins in Tokyo with lunch in the hotel (flights from London are not included. Your room is available from 2.00pm on 6th November – see Practicalities). In the afternoon, visit the Imperial Palace (formerly Edo Castle), and the reconstructed East Palace Garden. First of two nights in Tokyo.

Tokyo. At Edo, the daimyo (feudal lords) built grand residences with vast gardens. The 17th-century landscape garden, Koishikawa Korakuen, reflects their sumptuous, eclectic tastes. Nezu Kaichiro’s collection of Far Eastern arts is well presented in the eponymous museum, which has a delightful wooded garden dotted with teahouses (subject to confirmation due to exhibition schedules). In the afternoon, visit Kiyosumi, a superb, late-19th-century landscape garden built for Iwasaki Yataro, founder of the Mitsubishi conglomerate.

Kyoto. Bullet train to Kyoto (luggage by road). In the afternoon, visit the 14th-century Tenryu-ji, a Zen Buddhist temple and its panoramic pond garden with a ‘dragon-gate’ waterfall. First of five nights in Kyoto.

Kyoto. Morning visit to Ginkaku-ji (Temple of the Silver Pavilion), where its pavilion overlooks an elaborate dry-landscape garden with raked gravel featuring an enigmatic flat-topped conical mound. The superb garden at Chishaku-in resembles an unfolding landscape scroll painting. An optional afternoon visit to the Miho Museum, designed by I.M. Pei and harmoniously integrated into a forested nature reserve. The approach on foot via a tunnel and bridge leads to a glass structure on the crest of a hill and a sequence of luminous interiors incorporating traditional Japanese motifs.

Kyoto. Ryoan-ji’s walled stone garden, with its fifteen boulders, is one of Japan’s most abstract gardens. Nearby, the garden of Kinkaku-ji (Temple of the Golden Pavilion), a shogun’s villa later turned temple, retains aspects of the ‘paradise’ style. In the afternoon, visit the large walled temple compound of Daitoku-ji, many of whose sub-temples possess notable examples of dry-landscape gardens. One of the finest is at Daisen-in, a miniature landscape heavily influenced by Chinese ink-brush paintings.

Nara. A full-day excursion to Nara, first capital of Japan (ad 710–794) and modelled on the Tang capital of Chang’an (Xi’an) in China. The 12th-century Joruri-ji has a rare surviving example of a paradise-style pond garden with a pagoda and hall with nine golden Buddhas. Much of Nara is parkland dotted with ancient temples including Todai-ji which contains an arresting monumental bronze Buddha.

Kyoto. Nanzen-ji is distinguished by its massive gate and quarters of the abbacy (Hojo) which contain very fine 17th-century painted screens (fusuma) by Kano Tan’yu. Together with its sub-temples, it contains important dry-landscapes created by the eminent 17th-century tea master and garden designer Kobori Enshu. Nearby Murin-an, boasts a landscaped pond garden, a masterpiece of the late 19th-century garden designer Ogawa Jihei VII.

Hikone, Kanazawa. Drive to Hikone on the shores of Lake Biwa, and its two adjoining parks Genkyu-en and Rakuraku-en. Genkyu-en is a famous feudal landscaped garden incorporating the view of the early-17th-century keep at Hikone Castle. Continue to Kanazawa, an attractive city which retains much of its old character. First of two nights.

Kanazawa. Kenrokuen, one of Japan’s finest strolling landscape gardens, was created for the powerful local feudal lord of Kagawa. It has a superb view of its pine trees trained with rope in readiness for winter. The elegant villa Seisonkaku, which sits in the grounds, was built for the widow of the 12th-century lord and has wonderful courtyard gardens.

Kanazawa, Tokyo. A morning bullet train to Tokyo (luggage by road). The afternoon is dedicated to the Tokyo National Museum, which occupies several buildings in Ueno Park and houses some of the finest Japanese art in the world. The main gallery (Honkan) traces the development from prehistoric, sculptural earthenware to exquisite paintings and decorative objects of courtly patronage. First of two nights in Tokyo.

Tokyo. The 18th-century Rikugi-en offers superb views over its lake. There is free time to explore the colourful, traditional Japanese area surrounding the Asakusa Kannon Temple. Take a local boat down the Sumida River to Hama-rikyu, originally a tidal garden and hunting lodge belonging to the Tokugawa Shogunate and now a peaceful retreat in the heart of the metropolis.

High-speed rail travel (first class) from Tokyo to Kyoto and from Kanazawa to Tokyo; private coach for transfers and excursions; hotel accommodation as described below; breakfasts, 8 lunches and 6 dinners with wine or beer, water and coffee; all admissions; all tips; all taxes; the services of the lecturer and tour manager.

International flights are not included.

It is possible to arrange additional nights at the hotels before or after the tour, and airport transfers. Please note that the night of 6th November 2019 is included in the price of the tour to allow for early check-in on Day 1.

A good level of fitness is essential. Unless you enjoy entirely unimpaired mobility, cope with everyday walking and stair-climbing without difficulty and are reliably sure-footed, this tour is not for you. A rough indication of the minimum level of fitness required is that you ought to be able to walk briskly at about three miles per hour for at least half an hour, and undertake a walk at a more leisurely pace for an hour or two unaided. The tour involves a lot of walking in gardens. Average distance by coach per day: c. 44 miles. 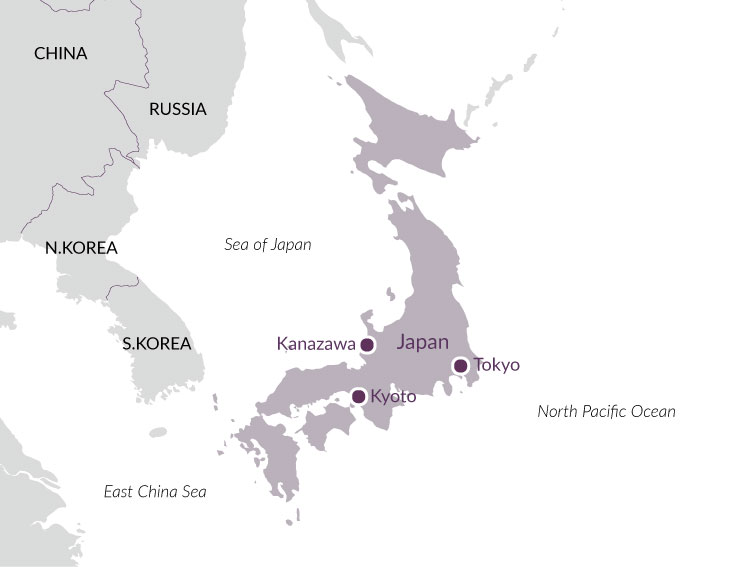 'Yoko brought the gardens to life! Her knowledge was extensive and her explanations clear and interesting.'

'The itinerary was pretty extraordinary, particularly the days spent in Kyoto where we delved deeply into the gardens and temples there, establishing a rhythm that was completely absorbing and transporting.'

'The tour manager was unfailingly helpful and kind.'