Journey through Slovakia - Ruthenia to the Danube via the High Tatras

A fascinating but little visited nation in east-central Europe formerly part of Czechoslovakia.

Memorable landscapes of hills, forests, fertile valleys and a dramatic range of mountains.

Slovakia is a nation that was never a truly independent until 1993. Prior to that it had constituted the slightly ill-fitting eastern end of Czechoslovakia (from which it was temporarily separated during the Second World War), and before 1919 it had for centuries lain within the vast multinational kingdom of Hungary – through which it had, since 1526, been subject to Habsburg suzerainty. Culturally and economically, however, and sometimes politically, the territory was sometimes closer to Poland and Ukraine than to Austria, Hungary or the Czech lands.

Towards the end of the Middle Ages the region was a significant artistic centre, and that there remains here an exceptional concentration of churches that retain their pre-Reformation appearance, their interiors an explosion of carving, colour, gold and imagery. It is amazing so much has survived in situ, in miraculous defiance of upsets caussed by Hussites, Turks, Hungarian rebels and (in the twentieth century) Nazi and Soviet soldiery and home-grown Communists.

It is less surprising that this turbulent history made it a country of castles, often sited on hilltops or unscalable outcrops, many ruined but some still roofed and furnished. Another repeatedly striking feature are the towns, the centres of which consist almost entirely of historic buildings. Like many in central and eastern Europe, its spacious urban thoroughfares are composed of Renaissance burgher houses or 18th- and 19th-century buildings in various classical guises. Stirred into this well-mannered mix are a handful of more aspirational constructions, town halls from mediaeval to Neo-Baroque, churches of many eras, a synagogue or two and maybe a flamboyant turn-of-the-century theatre.

The landscape setting of these urban centres forms one of the most memorable features of the tour. Predominantly hilly, the High Tatras is a truly spectacular mountain range. Forests are common, but so is the charming agricultural countryside of the valleys. Population density is low, and the area does indeed feel remote, archetypal east-central Europe, at the edge of an empire.

Slovakia is one of the most recent recruits to the EU, and one of its more conservative and least developed members. Part of the appeal of the country is that it has not enjoyed the wealth which might have enabled it to restore its historic patrimony to sparkling perfection, and that there is an appealing workaday authenticity about the life that is carried on amid historic fabric. One more thing: more unesco World Heritage Sites are seen than on most of our other tours.

London to Košice. Fly c. 12.45pm from London Heathrow to Budapest (British Airways) and then drive (3 hours) to Košice, with a break for dinner in Hungary. First of three nights in Košice.

Košice. Extensive, evocative and well kept, the historic centre of Košice is a delight. The Hlavná, a long broad boulevard which courses through the middle of the little city, links many fine buildings, including the elaborately ornamented and richly furnished Gothic cathedral and the turn-of-the-century theatre. Among the narrow streets and squares are other churches and two striking synagogues, Moorish-style of 1889 and Hungarian modernist of 1927. Dinner in an Art Nouveau restaurant. Overnight Košice.

Krásna Horké, Betliar, Jasov. Excursion through the forested hills and green valleys of the Košice district. The 1905 mausoleum of Františka and Dionýz Andrássy near Krásna Horka is a superb confection of marble and mosaic. Another Andrássy property is the mansion at Betliar where 50 richly furnished rooms are exactly as left by the family in 1944. The late-Baroque monastery complex at Jasov, designed by the Viennese architect Anton Pilgram, is particularly distinguished for its great library. Overnight Košice.

Hervatov, Bardejov. The village of Hervatov possesses a 15th-century timber church, the earliest in Slovakia. The delightful little walled town of Bardejov has at its centre a large oblong square, a town hall with some of the earliest Renaissance ornament outside Italy, and a church with an outstanding collection of Gothic altarpieces, brilliantly carved and painted. Spišský Hrad is one of the most spectacular ruined castles in Europe, its white limestone masonry capping a conical hill amidst green fields and wooded hills. Overnight Levoča.

Levoča and around. Levoča wonderfully preserves its regular mediaeval layout and houses which have been refaced in Renaissance, Baroque and later styles. With its profusion of artworks and furnishings, the interior of the Church of St James is an amazing survival of the mediaeval world. Some of the dozen major altarpieces are by the great sculptor Master Pavol. Some free time here before an excursion to two village churches and a town to see a masterly Gothic chapel, a remarkable 13th-cent. wall painting and, in Kežmarok, an altarpiece by Master Pavel. Overnight Levoča.

Oravskỳ Podzámok, Vlkolinec, Banská Bystrica. Drive to Oravskỳ Podzámok to visit the magnificent castle. Begun in the 13th century and frequently enlarged and reinforced thereafter, it clasps a hill high above the river below. Continue to the village of Vlkolinec (the hill road requires taxis for the final stretch) which consists entirely of traditional wooden buildings (unesco site). Banská Bystrica is a lively town with a beautiful central square. First of two nights here.

Poniky, Banská Štiavnica, Hronsek. A drive through particularly attractive countryside takes us to Poniky where the modest village church is filled with fine 14th- and 15th-cent. frescoes. Spread over a conjunction of hillsides with steep cobbled streets, Banská Štiavnica is an exceptionally lovely town, mining wealth creating many imposing mansions. Among its fascinations are a monastery converted to a fortress to guard against Ottoman incursions, and an art gallery devoted to Jozef Kollár, ‘the Slovakian Van Gogh’. Hronsek has a large 18th-century wooden church. Overnight Banská Bystrica.

Zvolen, Trnava, Bratislava. The white walled Renaissance castle with swallow-tail battlements at Zvolen displays the National Gallery’s excellent collection of Gothic art. Trnava became a religious and cultural centre when the Esztergom archbishop retreated here from the Turks in 1543 – and the departure of the episcopal establishment 300 years later led to a decline which allowed much of its fabric to survive. Attractive streetscape, seminaries churches, city walls. Reach Bratislava in time for a pre-dinner walk through the historic centre. Overnight Bratislava.

Bratislava. Bratislava was the capital of Christian Hungary when most of the country was under Ottoman rule. Now it is capital of Slovakia, and the old centre is one of the loveliest and most interesting on the banks of the Danube. There is an abundance of highly attractive streets and square and historic buildings of all sorts. Places visited include the Gothic cathedral, the 18th-cent. archiepiscopal palace, an Art Nouveau church and a collection of 20th-century art. Fly from Vienna (an hour away), arriving at Heathrow c. 9.00pm.

Flights (Euro Traveller) with British Airways (Airbus 320); travel by private coach; hotel accommodation as described below; breakfasts; 1 lunch and 5 dinners with wine, water, coffee; all admissions; all tips; all taxes; the services of the lecturer and tour manager.

Double Tree by Hilton, Košice: a modern high-rise 4-star hotel located close to the historic centre. The next two hotels are well located in the main town squares, adequately clean and comfortable, somewhat quirky, locally rated as 3-star and the best in their area. However, they are below the standards we normally aim for. Hotel U Leva, Levoca, and Hotel Arcade, Banská Bystrica. Radisson Blu Carlton, Bratislava: a stylish and very comfortable 4-star hotel on one of the old town squares, the best in the city. Single rooms throughout are doubles for sole use.

There is unavoidably a lot of walking, and trip hazards are endemic. Fitness and surefootedness are essential. Average distance by coach per day: 87 miles. 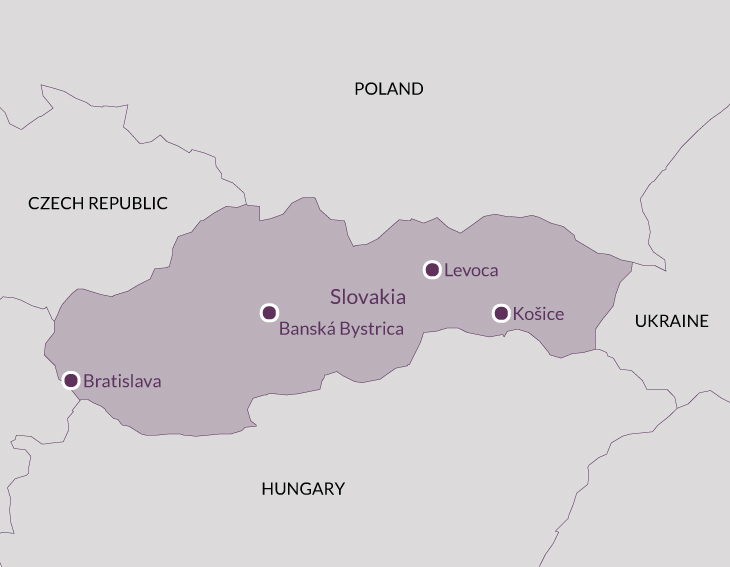