Kingdoms of the Deccan - Art & architecture, sixth to eighteenth centuries

Islamic architecture in the four cities of the Bahmani sultanate founded in the 14th and 15th centuries (Gulbarga, Bidar, Bijapur, Golconda).

Hindu architecture of the Chalukyas from the 6th to the 12th centuries (Badami, Aihole, Pattadakal).

Hyderabad was one of India’s largest princedoms and retains a rich artistic heritage.

Hampi was capital of the leading Hindu power from the 14th to 16th centuries, a most beautiful and fascinating centre.

The Deccan plateau has distinctive, dramatic, rocky landscapes that are at their best in November, after the monsoon season.

Vijayanagara, the City of Victory, was founded in 1336 and its eponymous empire ruled the Deccan until its defeat by the Islamic forces at the battle of Talikota in 1565. This political entity is often regarded by historians as the last Hindu power of the region. It marks the transition between the early Hindu kingdoms, such as the Chalukyas who ruled from the sixth century to the twelfth, and the Muslim sultanates which succeeded them and continued to rule until Independence in 1947.

The Chalukyas’ architectural tradition developed from the early rock-cut caves at Aihole and Badami to the free-standing structural Hindu temples in Pattadakal. This evolution is clearly confined to sacred architecture. By contrast, the Vijayanagara empire, while further developing and standardising the sacred architecture of Hinduism, also developed an imperial idiom, mixing sacred and vernacular elements and gradually integrating Islamic elements borrowed from the emerging sultanates.

From the fourteenth century onwards, the Deccan saw a sequence of four Islamic sultanates, each with its own capital. In 1347, Ala-ud-Din Bahman founded his capital in Gulbarga after declaring his independence from the Delhi sultans. The capital was later shifted to Bidar in 1425. Bijapur and Golconda later gained importance following the demise of Bidar.

The foundation of every new capital gave impetus to the local building traditions. Unlike in north India where most Islamic centres were built on existing Hindu cities, the Deccan sultanates built their capitals anew and a distinct Islamic architecture developed.

A feature of the tour is time spent visiting places where very few tourists venture. This involves some long coach journeys and two overnight stays in fairly simple accommodation, but the reward is the thrill of deserted citadels with their superb palaces and mosques and impressive fortifications.

Hyderabad. Rooms are available at the hotel from 2.00pm on the 9th November, allowing for an early check-in today. Nothing is planned until a pre-lunch talk. In the afternoon walk in Lal Bazaar, the centre of the historical city; see the Char Minar, the monumental gateway to the new 16th-century palace complex. Overnight Hyderabad.

Golconda. Now within Hyderabad, Golconda was the first Islamic settlement in the area. The citadel of the Qutb Shahis, protected by three concentric walls built 1512–1687, is an excellent example of the Bahmani military architecture. Nearby are grand royal tombs, with bulbous domes and elaborate stucco, and the Badshahi Ashurkhana is a very fine example of the Shia architectural tradition. Lunch today is in the former Nizam’s palace. Overnight Hyderabad.

Hyderabad. Today’s visits focus on Hyderabad after it was annexed by the Mughal emperor Aurangzeb in 1687 and subsequently ruled by the Nizam. The Chaumahalla Palace was completed in 1750 and comprises four mansions set around a garden. The Durbar Hall (public meeting space) with its Belgian crystal chandeliers is an indication of the Nizam’s wealth and taste for things European. The day ends with a visit to a private collection of Indian paintings and textiles. Overnight Hyderabad.

Bidar. A four-hour drive to Bidar, the capital of the Bahmani Sultanate from 1425 until its annexation to the kingdom of Bijapur in 1619. Of particular interest are the 16-pillared mosque and the Rangeen Mahal, the Palace of Colours, so called because of the wall tiles and mother-of-pearl inlays. Following a visit to the Royal Tombs at Ashtur, continue to Gulbarga. Overnight Gulbarga.

Gulbarga, Bijapur. The small town of Gulbarga is of major historical importance. The first Bahmani capital in the Deccan, it was founded in 1347 before being abandoned in 1424 in favour of Bidar. The Jama Masjid (Friday Mosque), similar to the Cordoba Mezquita in form and dimensions, is unique in south India as it is fully covered and has no minarets; one theory claims it was built as a palace. Drive to Bijapur, arriving in time to visit the Gol Gumbaz, a monumental domed tomb, before sunset. Overnight Bijapur.

Bijapur, Badami. In the morning there is a walk through the old town to see the many historic buildings. The walk continues around the city walls and gates. The Ibrahim Rauza tomb complex consists of two intricately carved twin buildings finished in 1626, the tomb of Ibrahim Adil Shah II and the mosque. In the afternoon we leave the Islamic region and drive  to the centre of the former Hindu Chalukya kingdom. First of three nights in Badami.

Aihole, Pattadakal. Numerous Jain and Hindu temples are scattered around the village of Aihole, a clear sign of its religious significance from the 6th to the 12th centuries. The sculptures of the Durga temple are among the finest of the Chalukya period. The World Heritage Site of Pattadakal nearby is celebrated for embodying the last stage of Chalukyan architecture, 8th–9th centuries. This is a unique site where the three distinct styles of Indian religious architecture are found in close proximity. Overnight Badami.

Badami. The capital of the early Chalukyas from the 6th to the 8th centuries, Badami has superb examples of early sacred architecture, both rock-cut and free-standing. Moreover, the sculptural programme of the cave temples provides a fascinating insight into the Hindu iconographic development of this period. Overnight Badami.

Badami. Free morning in Badami, now a charming small town beside a lake overlooked by rugged red sandstone cliffs. The afternoon is dedicated to the drive through remote and rural countryside to Hospet, our base to visit the World Heritage Site of Hampi. First of three nights here.

Hospet, Hampi. The ruins of the Vijayanagara capital, 1336–1565, lie in a remarkable landscape strewn with granite boulders and spread along the Tunghabhadra river. The extensive site is organised around two main areas, the Sacred Centre with its concentration of temples and shrines, and the Royal Centre. The Sacred Centre is close to the river and includes the Virupaksha Temple in the middle of the village and Hemakuta Hill with its numerous shrines and commanding views of the area. Overnight Hospet.

Hampi. Following a visit to the Vitthala temple, today’s visits focus on the Royal Centre and its secular buildings. Most striking is the Lotus Mahal in the Zenana enclosure with its cusped arches and pyramidal towers, a superb example of the syncretic architecture of Vijayanagara. Overnight Hospet.

Bangalore. The hotel is at the airport, ideally located for your onward journey. No car transfers are required.

Domestic flights with Air India: Hubli to Bangalore; travel by private air-conditioned coach; accommodation and meals as described below, all admissions; all tips; the services of the lecturer, tour manager and local guides.

breakfasts, 12 lunches and 12 dinners with wine or beer, water and coffee.

International flights from London to Hyderabad and Bangalore to London are not included in the price of the tour. We will send the recommended flight options when they come into range (by December) and ask that you make your own flight reservation.

Domestic flights with Air India: Hubli to Bangalore, are included in the price of the tour.

Required for most foreign nationals, and not included in the price of the tour. We will advise all participants of the process.

Some of the hotels on this tour are less than luxurious, but they are adequately clean and comfortable and all the rooms have en suite bathrooms. Taj Krishna, Hyderabad: grand and comfortable 5-star hotel, modern if a little dated. Heritage Inn, Gulbarga: simple though the best in town for service; rooms are clean with en suite facilities. Madhuvan International, Bijapur: basic but friendly hotel, similar to Gulbarga. Badami Court, Badami: a pleasant hotel with willing service around a garden with a small pool. Heritage Resort, Hampi: the newest and best in town, located 6 km from Vijayanagara World Heritage Site. Taj, Bangalore:a conveniently located luxury hotel with all modern amenities.

A good level of fitness is essential. Unless you enjoy entirely unimpaired mobility, cope with everyday walking and stair-climbing without difficulty and are reliably sure-footed, this tour is not for you. A rough indication of the minimum level of fitness required is that you ought to be able to walk briskly at about three miles per hour for at least half an hour, and undertake a walk at a more leisurely pace for an hour or two unaided. Uneven ground and irregular paving are standard. Unruly traffic and the busy streets of larger cities require some vigilance. There are fairly steep ascents to hilltop forts and temples and long coach journeys during which facilities are limited and may be of poor quality. Most sites have some shade but the Indian sun is strong, even in the cooler seasons. Average distance by coach per day: 56 miles. 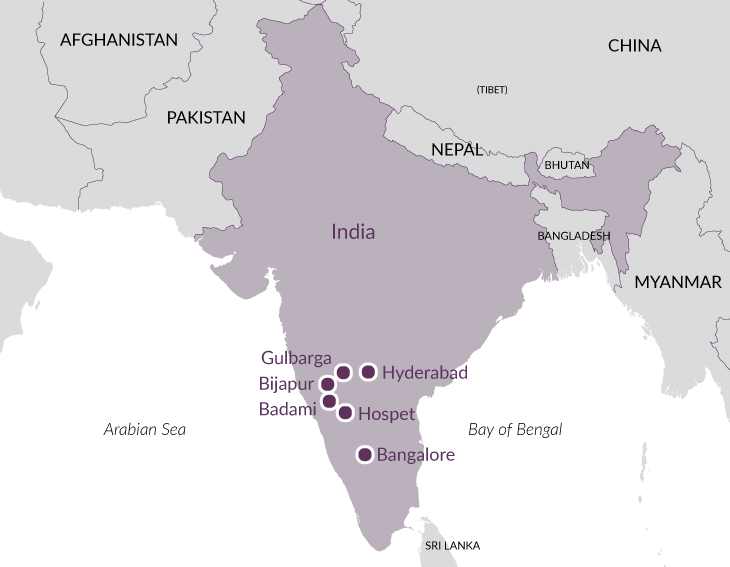 'Some interesting sites with impressive remains. Pleasantly free from other tourists. Finishing at Hampi ensured the trip finished on a 'high'!.'

'The lecturer’s knowledge of the sites was fantastic and everything was done to make our group comfortable.'