Music by Johann Sebastian Bach, his forebears and offspring, and some other composers of the baroque era.

Artists from around the world including some of the leading specialists in Bach and baroque.

Concert venues include the Thomaskirche and Nikolaikirche, the churches where J.S. Bach was director of music.

Centrally-located hotel within easy walking distance of the concerts and restaurants.

Guided walks to explore the architecture and musical heritage of this historic and lively city.

Over eighty members of the Bach family are listed in the New Grove Dictionary of Music and Musicians. For two centuries the Bachs, Johann Sebastian among them, plied their trade in the employ of courts, churches and free cities in Thuringia and Saxony. Though geographically in the heart of Germany, these places were not among the major political or cultural centres of Europe. And their location on the other side of the Iron Curtain in the later 20th century enveloped them further in obscurity.

There was no star system in the Bachs’ time; genius was an alien concept. The tradition the family worked in was one of sheer dogged professionalism, with ability generally recognised and rewarded. Really exceptional once-in-a-century talent was beyond the comprehension of the city burgers, however;  Johann Sebastian was the third choice for the post of Cantor at St Thomas’s Church in Leipzig, and for the remainder of his life he was constantly chafing against the indifference and high-handedness of his employers.

The Bachfest Leipzig has become established as one of the major items in the calendar of European festivals. The venue most used is the parish church of St Thomas, the Thomaskirche, which was Bach’s principal auditorium during the 27 years when he was effectively the city’s director of music. There are concerts also in the Nikolaikirche, another church for which he had responsibility, in the University Church, the modern Gewandhaus and in the charming neo-baroque Salles de Pologne.

Leipzig is now, again, a handsome and lively city, following an almost miraculous transformation during the 1990s and beyond. Cleaning, restoration and rebuilding went hand in hand with the emergence of cafés, smart shops and good restaurants. Located at the heart of this ancient trading city is the large market place and the renaissance Town Hall, and around is a beguiling network of alleys, courtyards and arcades.

Guided walks investigate this heritage and the musical history of the city, which encompasses not only the Bach family but also Telemann, Robert and Clara Schumann, Mendelssohn, Wagner, Mahler and Kurt Masur. There is time also to enjoy the excellent museums – the Fine Arts Museum in spectacular new premises, the radically refurbished Museum of Musical Instruments, and the rejuvenated Bach Museum.

Morning flight from London Heathrow to Berlin (British Airways) with onward travel to Leipzig (c. 21/2 hours) by private coach. The first of the daily talks is followed by dinner.

A morning walk with a specialist guide concentrates on Leipzig’s musical heritage. Free afternoon, opportunity for the Museum of the Book or a trip by tram to the Völkerschlachtdenkmal, a vast centennial monument to commemorate the Battle of the Nations (1813). 8.00pm concert at the Gewandhaus with Les Arts Florissants & William Christie, Cantorey & Hans-Christoph Rademann, soloists: J.S. Bach, including BWV 16, BWV 1068 and Magnificat BWV 243.

After the morning lecture, the earlier part of the day is free. The German Museum of Books and Writing and Museum of Applied Arts remain. 3.00pm concert at the Paulinum-Aula, Concert Clemens Aarhus, Pauliner Barockensemble, Carsten Seyer-Hansen, soloists: J.S. Bach cantatas. An early dinner is followed by the 8.00pm concert at the Thomaskirche: St John Passion with Choir and Orchestra of the J.S. Bach Foundation St. Gallen, Rudolf Lutz (conductor), soloists.

Transfer to Berlin for the flight back to London Heathrow, arriving c. 3.30pm.

After the talk, a walk with a local guide which passes the main squares, streets and buildings of the centre. 4.00pm concert at the Gewandhaus with the Amsterdam Baroque Orchestra and Ton Koopman and three other harpsichordists for a programme of harpsichord concertos, by J.S. Bach (BWV 1062, 1063, 1064,1065) and one by C.P.E. Bach. This is followed by a 7.00pm concert at the Gewandhaus with Sir András Schiff (piano): J.S. Bach, The Well-Tempered Keyboard, BWV 846–869. Dinner after.

Morning talk, then a guided tour of the Grassi Museum of Musical Instruments, one of the most important collections in the world. You may wish to stay on for the Grassi Museum of Applied Arts, or visit the Museum of Fine Arts or the apartment where Felix Mendelssohn lived and died. 5.00pm concert at the Kupfersaal, Gli Incogniti, Amandine Beyer (director, violin): violin concertos by Telemann, C.P.E. Bach and J.S. Bach. Break for dinner. 8.00pm concert at the Nikolaikirche, Nederlandse Bachvereniging, Shunske Sato (leader), soloists: Bach Cantatas BWV 80, 97, 117 & 192. Optional 10.30pm concert at the Federal Supreme Court with Mahan Esfahani (harpsichord): Pachelbel, Marchand, Byrd, Frescobaldi, J.S. Bach, J.C. Bach.

Morning lecture, then a guided walk which to some less well-known places with musical associations. For the afternoon we recommend the German Museum of Books and Writing, the Stasi Museum or a tram ride to the Völkerschlachtdenkmal, Monument to the Battle of the Nations, 1913. 6.00pm B Minor Mass at the Thomaskirche with Coro della RSI (Choir of Swiss Radio & TV), I Barocchisti, Diego Fasolis (director), soloists. Dinner after.

Leipzig Marriott Hotel: conforming to its brand, the Marriott is a smart 4-star hotel with lots of marble, pillars, wood, brass and comfortable easy chairs. It is located on a pedestrian street just inside the north-eastern section of the ring road that runs around the city centre, and no more than 10–15 minutes on foot from the venues. Rooms are spacious, with cosy neoclassical furnishings and are equipped to a high standard. Single rooms are doubles for sole use.

Walking is the only practical way of getting around the largely pedestrianised centre of Leipzig. Most walks will be less than 20 minutes. 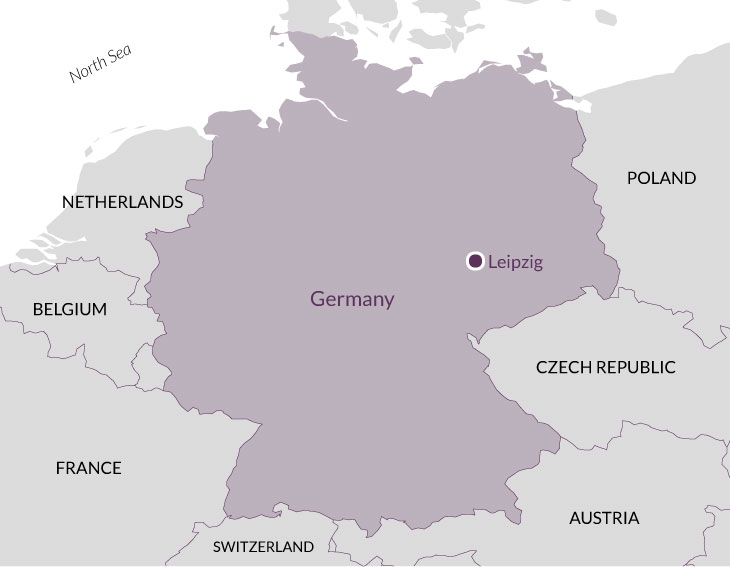 'The social contact with the others in the group added a huge amount to my enjoyment. The mix of people from different countries was an added bonus.'

'There are no words left to convey the degree of pleasure and inspiration received from the music.'

'Excellent does not convey what a fantastic immersive experience this was.'

'Absolute perfection! This was the experience of a lifetime.'