Spectacular scenery and geology in the Calchaquí Valleys.

A private tango show in one of Buenos Aires’ historic cafés.

Tango, Evita, Las Malvinas, Maradona, meat and Malbec… much about Argentina is familiar to many of us, and yet it remains something of an enigma. It’s about as far from Europe as a South American country can be, and yet is famously – or perhaps infamously – European in so many regards.

Argentina is South America’s second-biggest country and the eighth-largest in the world, ranking between India and Kazakhstan. Yet it has a population smaller than that of Spain and its economic power has more often than not brought it woe instead of wealth. After giving the continent one of its great liberators, José de San Martín, the country was plunged into decades of civil war. For much of the twentieth century, military dictators and populists squandered the nation’s huge potential and repressed its citizens.

How has this decline been managed, and how did Argentines manage to retain their creative vigour and distinctive glamour? What about Argentina’s relationship with the UK, an important trading partner, builder of South America’s most ambitious railway network and colonialist villain in the Falkland Islands? When and how did the remote backwater of Buenos Aires emerge to become a world-class city? Is ‘Paris of South America’ anything other than a nostalgia-laden nickname?

This tour aims to forge an understanding of Argentina through its multi-layered history and multi-faceted culture. Starting in Buenos Aires, we visit aspiring cities and civic palaces, museums and art galleries, cafés and steakhouses, and the necropolis where Evita is entombed alongside the society figures she spurned. It’s a short hop from the capital to the pampas, one of the world’s great breadbaskets and stockyards, and the backdrop against which the figure of the gaucho emerged.

Follow the old Camino Real or Royal Highway, that once connected Buenos Aires with the silver mines of Alto Peru and the seats of Spanish power. In the northwest visit the Jesuit ranches and religious sites of Córdoba, Argentina’s second city. From here, continue towards the Andes to survey a pre-Columbian site at Quilmes, see the cactus-strewn landscapes of the Calchaquí Valleys and visit the colonial treasures of Salta.

Along the way, we taste the criollo cuisines of the pampas as well as the foods of the Andean Valleys, many of which have their origins in pre-Hispanic societies. As with so many aspects of Argentine reality, from music to literature to religion, there has been a complex interplay between native identity and nationhood, indigenous traditions and imported values.

We also sample the country’s famous wines in Cafayate, south of Salta, where vines grow at altitude. Huge alternations in temperature favour small-grained grapes with a high concentration of aromas and flavours.

Buenos Aires. Rooms are ready for occupation from 3.00pm on 28th October, allowing for an early check in. The tour begins with lunch at 12.15pm on 29th October. After an introductory talk, walk to the nearby Recoleta cemetery, with its architecturally diverse and ornate tombs, burial place of many of the country’s leaders and cultural figures, including Eva Perón.

Buenos Aires. Walk down the grand Avenida de Mayo, with fine belle-époque architecture, to the Casa Rosada, seat of the government of Argentina. Tour its beautiful interiors and gain further insight into the country’s history and politics (subject to confirmation). See the neoclassical cathedral and the Teatro Colón, one of the world’s finest concert halls with renowned acoustics, and where is also the possibility of attending an evening performance (programmes are announced in February 2021).

Buenos Aires. Explore Latin American art at the Museo de Bellas Artes and modern art gallery, MALBA. Trace the life and work of Eva Perón at the Museo Evita, housed in a 1923 mansion that belonged to her social foundation. Private tango show and dinner at one of Buenos Aires’ historic cafés.

San Antonio de Areco, Pampas. Journey outside the city to the Pampas grasslands to discover gaucho history and culture in the delightful town of San Antonio de Areco, home to renowned silversmiths. Enjoy an Argentine beef lunch, grilled in front of you at a majestic estancia in the countryside, surrounded by horses and cattle.

Córdoba. Fly in the morning from Buenos Aires to Córdoba (1 hour 30 minutes, Aérolineas Argentinas). Visit on arrival the country’s first university, founded by the Jesuits in 1610, and their most historic church, Templo de la Compañía de Jesús, dating to 1675. Overnight in Córdoba.

Córdoba. Drive outside of the city to see the 17th-cent. Jesuit estancia and church of Alta Gracia. Fly in the late afternoon to Salta (1 hour 30 minutes, Aérolineas Argentinas). First of two nights in Salta.

Salta. A day to explore the charming town of Salta with its fine colonial and neoclassical architecture. The rose-coloured cathedral houses the tomb of another Argentine liberator, General Güemes, while the italianate church of San Francisco was designed by Luigi Giorgi. Salta’s excellent archaeological museum presents the incredible Inca ritual of child sacrifice. Free afternoon and evening lecture by a local expert on the geology of the Calchaquí Valleys, in preparation for the onward journey.

Calchaquí Valleys, Cachi, Molinos. In two minibuses drive through the dramatic and constantly changing scenery of the Calchaquí Valleys (c. 4 hours 30 minutes). From lush green countryside and deep red mountains, through fields covered in thousands of giant cacti we reach the tiny and pretty town of Cachi with a small archaeological museum. Continue to our hotel in Molinos, opposite the 18th-century church. Overnight in Molinos.

Bodega Colomé, Cafayate. Nestled deep in vine-clad hills, drive to Bodega Colomé for a tasting and lunch with their aromatic and flavourful wines. Owner Donald Hess has combined his love of wine and art by building a James Turrell museum on-site, a fascinating playground of light and space. The drive to Cafayate (c. 3 hours) reveals yet more astonishing geological features. Light dinner with El Esteco wines, whose bodega belongs to our hotel. First of two nights in Cafayate.

Quilmes, Cafayate. Morning excursion to the pre-Inca remains at Quilmes. Inhabited from the 9th century ad, its 3000 inhabitants resisted evangelisation and enslavement resulting in bitter punishment. Taste some of Cafayate’s best wines with lunch in the vineyards of El Porvenir and dinner at Finca las Nubes, the vineyards of José Luís Mounier.

Cafayate to Buenos Aires. Another breathtaking drive through the reds, ochres and pinks of the Cafayate gorge (c. 4 hours 30 minutes). Return to Salta for a flight to Buenos Aires (2 hours, Norwegian Airlines) and a final dinner in the capital.

Domestic flights with Aérolineas Argentinas and Norwegian Airlines (aircraft: Boeing 737) travel by private coach or minibus; hotel accommodation as described below; breakfasts; 7 lunches (including one box lunch) and 9 dinners with wine, water, coffee; all admissions; all tips; all taxes; the services of the lecturer, tour manager and local guides.

International flights between London and Buenos Aires are not included in the price of the tour. We send recommended flight options from London with your booking confirmation, which will be available to book in December 2020. You can either make your own reservation or we can book on your behalf. The cost of a World Traveller (economy) seat with British Airways at the time of going to press is c. £950.

We hope to be able to secure tickets to a performance at the Teatro Colón in Buenos Aires. Programme details and tickets to be released in February 2021.

This is a long tour that involves a lot of walking and standing. A good level of fitness is necessary and it should not be attempted by anyone who has difficulty with everyday walking and stair-climbing. Drives in the north-west are long, roads are not paved and the terrain dictates travel by minibus. Cachi sits at an altitude of 2,531 metres above sea level. Average distance by coach per day: 63 miles. 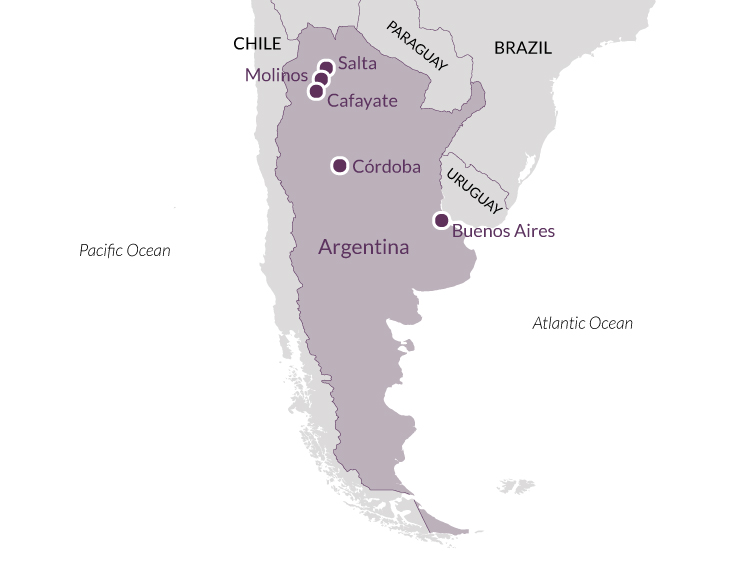