“When I plan an itinerary I spend dozens of hours fiddling around from one day to another. I change timings maybe by five minutes, then change them back. I will change them by quarter of an hour – will that fit better? – pulling, pushing…”

Anyone who has worked with Martin Randall will recognise that these are the words of a man who is driven, a man for whom nothing short of perfection will ever suffice, a man with passion, vision, dedication – and a prodigious capacity for good old-fashioned graft.

I meet Martin in the hallowed confines of the Athenaeum, the London club of the great and the good of which, fittingly, he is a member. It is 30 years since he formed the company that bears his name and the market leader for highly specialised cultural tours – Martin Randall Travel. It has been quite a journey. His company has won accolade after accolade; his tours have become a byword and a benchmark for excellence. They have a loyal clientele of the intellectually curious prepared to pay top dollar for what are often unique experiences. Randall – once described by the political journalist Simon Hoggart as the last Renaissance man – has an infectious enthusiasm, undimmed even at 65, but he has suffered for his art and his architecture and his arias along the way.

Suffered for his art? Well there was the time he was shot in Naples. He was escorting a group to the Misericordia to hear The Tallis Scholars sing Gesualdo madrigals beneath Caravaggio’s ‘The seven works of mercy’, when, “Bang!” a shot rang out and Martin was hit. Mercifully, rather than being a case of see Naples and die it was simply a bunch of youths letting off steam with an air gun containing harmless pellets. But there was consternation amongst the group. “Martin has been shot”, “Martin has been shot!” the word went down the line.

MRT clients are used to dramas – usually enacted in the most prestigious opera houses and music venues in the world – but there are less welcome kinds too. Suppliers sometimes fail to deliver – river cruise ships; tickets for La Scala. Strikes and natural disasters such as the Icelandic volcanic ash cloud of 2010 can also wreak havoc.

“When I started, it came as a real shock to discover that despite all the care taken in advance something might go wrong or even some customer might not like it,” says Martin. “I was not very resilient; I took things too personally.”

The early journey was not the easiest, either. Brought up in Bedford and much influenced by a teacher who drew out a “precocious lust for art history”, Martin decided at the age of 14 that his future lay in art museums and that he would become the youngest ever director of the National Gallery (“an outrageously inappropriate ambition”).

The study of Art History at the Courtauld Institute in London and a postgraduate course in the Philosophy of Art at York University were interspersed with gap years in Italy (Florence) and Germany (Bamberg) and, unlikely though it now seems, spells as a manual labourer, including a period on night shift in Bedfordshire Brickworks.

The quest for museum work proved less successful, with application after application being met with rejection. Baffled and despondent, Martin readjusted his sights, taking a succession of jobs in the sphere of tourism with organisations that he felt left a lot to be desired.

He could do it better himself. “Good luck,” said his school teacher father, words that for Martin “turned an ill-formed desire into unshakeable ambition.”

Prospect Art Tours was the name of that first foray into the world of cultural tourism and it was here that Martin began to develop what were to become hallmarks of Martin Randall Travel – getting art historians to accompany groups to sites themselves, thinning down overloaded Itineraries, reducing tour size numbers.

While the product was good, the company was not profitable and after six years, in 1988, Martin found himself ousted. It was a bitter blow, occasioning huge feelings of self doubt. His detractors said he was too perfectionist, too academic and spent too long fiddling around with itineraries and text. He resolved to start up again. Enter stage left, Martin Randall Travel.  “I had to show the world as well as myself that I was not a failure,” he says.

The first MRT tour – in the winter of 1988  – was to the Franconia region of Germany: the northern part of Bavaria containing such treasures as Nuremberg and Bayreuth, Wurzburg and Rothenburg ob der Tauber.

Tour numbers were limited to a maximum of 22; all were accompanied by expert lecturers and, later, tour managers. Not only did clients receive highly informed commentaries, they also had time and mental space to appreciate what they were seeing.

Over time the company expanded geographically – branching out from Europe into Asia and the Americas – and redefined the concept of cultural tourism.  To places containing great art, architecture or classical music pedigree were added tours revolving around historical figures, such as Winston Churchill, the buildings of the Victorians, including the great railway heritage of northern England, gastronomic experiences and even the Northern Ireland of the Troubles.

A London Days programme offered highly illuminating insights into the architecture and history of the city; long weekends for history symposia or chamber music were added to the mix.

The most important innovation was the introduction of entire music festivals involving performances by first rate musicians in exquisite settings throughout Europe solely for the benefit of MRT clients. “The music festivals are capable of bringing a higher degree of delight than almost any other product in the realm of tourism,” he says. “If at the culmination of nine concerts in places associated with JS Bach you hear as good a performance as it is possible to hear of the B Minor Mass in the Nikolaikirche in Leipzig – it’s hard to do better.”

And though all the rest MRT does is widely copied around the world, after 27 years these festivals remain unique. No other organistion has come close.

In addition to devising tours, Martin has always led them. “Partly because I like it; partly because it’s necessary to remind yourself what it’s actually like. Regularly being at the coalface is terribly important.”

Especially when, as is the case with Martin’s signature London Backstreets Walk from Hyde Park to The Tower Hyde Park, a glass of Champagne at the Savoy is part of the mix.

But then those stops are a crucial part of the MRT way. Building more time into the tours for people to reflect more on what they are seeing and hearing, and to enjoy good food and drink and convivial conversation is a key part of the company ethos. As is making time for lunch  (“lunch is always at lunchtime”) and planning our own music festivals so that concerts don’t begin at 7.30pm (“so ruinous to dinner”).

Martin is justifiably proud of his company and his own achievements, though he concedes he can be a little eccentric and idiosyncratic – and that even now making money is not his forte.

“MRT has flourished because I have a rare combination of talents and experience. I am an art historian and I have also travelled widely. I am capable of fresh thinking,” he says. When I work out an itinerary I know what it should look like because I have been there. I can picture it. I know how long it takes to walk those stretches. I can engage with the detail.”

Does he ever regret not having become a museum director? “No. Doing what I have done I’ve seen probably more works of art and visited more museums and great buildings than almost anyone else in Britain. I’ve also met extraordinarily interesting people.”

And what now? Having turned 65, he has stepped back from much of the day to day running of the business, but has no intention of giving up the thing he loves most – devising ever better, ever more innovative, ever more satisfying cultural tours and events.

He pauses to reflect on an observation once made about Bach: “He made the faulty good; the good better; the better perfect.”

“That is the process to which we aspire. Of course we never get there. There never is perfection.”

Adrian Bridge is a senior travel editor at the Telegraph. 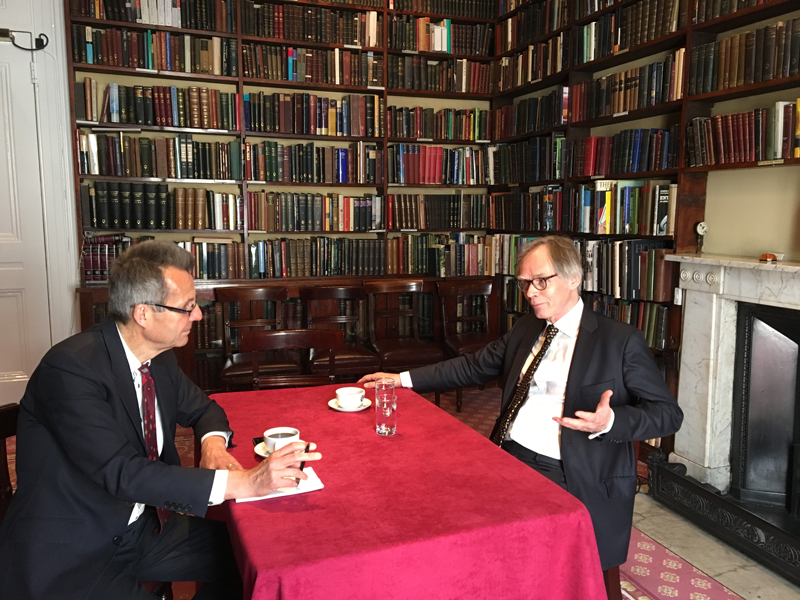