Focuses on the five centuries when China reached its greatest extent, greatest unity and longest periods of peace.

Ruling from 1368 to 1911, the Ming and Qing dynasties bequeathed the most spectacular imperial buildings in China.

Porcelain, painting and garden design reached a peak of perfection; this tour sees many of the best surviving examples of all the arts.

Under the two last imperial dynasties, which together spanned 543 years, China reached her peak of territorial extent, political power, of riches, of peace. Most of the country’s greatest surviving historic architecture dates to this period – 1368 to 1911 – and much of that precious and beautiful heritage is seen on this tour. Imperial patronage produced palaces, tombs and temples, consolidating the steady evolution of standard designs to reach immutable perfection.

Integral to the architecture is ornamentation of exquisitely carved stone and wood, often gaily painted, and brightly glazed ceramics. Painting of the era achieved its classic, ineffable form, but it is for porcelain that Ming is popularly a byword for perfection, and deservedly, yet under the eighteenth-century Qing emperors porcelain also reached sublime heights of beauty. Some of the finest examples from the imperial kilns are seen on this tour. The classical Chinese garden – an art form as highly esteemed by contemporaries as any other – also took shape here in the sixteenth century, and, astoundingly, a dozen or so excellent examples survive in something approaching their original state in Suzhou.

The tour begins at Suzhou, an appropriate place to recover from the flight and ease into this astonishing country. Though a rapidly growing industrial hub (a third of the world’s silk is produced here), the extensive historic centre retains its pre-modern scale and texture with two- or three-storey buildings of whitewashed walls, grey tiles and upturned eaves – whether old or new. Ancient canals still thread between narrow streets which are lined with camphor trees. Suzhou was home to the four founding fathers of the Ming and Qing tradition of painting, and it is no coincidence that garden design is so prominent here.

Nanjing was the base of the Ming clan before they conquered the Yuan dynasty of Mongol emperors in 1368, and the city became capital of a reunited China. The first Ming emperor, Hongwu, rebuilt the walls; 20 miles long and 40 feet high, for size they have never been surpassed. But his successor, Emperor Yongle, moved the capital to Beijing in 1403. The palace he built there, the Forbidden City, has, against the odds, survived numerous vicissitudes and is one of the world’s most extensive and fascinating royal residences.

The last hundred years of Qing rule was a period of decline, of humiliation by foreign aggressors and of internal dissension. Glory sank into misrule and tragedy – and most of the twentieth century can be similarly characterised. In these circumstances it is perhaps surprising that much of aesthetic worth or delicacy survived at all, but plenty does, certainly enough to demonstrate that the era of the Ming and Qing dynasties constituted one of the great civilizations in world history.

Shanghai to Suzhou. The tour begins with lunch at a Shanghai hotel (flights from London are not included – see Practicalities). After lunch, drive to Suzhou (2½ hours). With its low-rise buildings and camphor trees flanking streets and canals, the historic centre is an endearing place to begin after the journey. Upon arrival there is a walk and a visit to one of the oldest surviving gardens. First of three nights in Suzhou.

Suzhou. Clustered in a corner of the city are a 12th-cent. bridge, a 5th-cent. pagoda and a sophisticated Ming era gateway in the ramparts which allows admission by water or by land. The Master of the Nets Garden is a masterpiece featuring all essential elements in garden design. Designed by the Chinese-American architect I.M. Pei and opened in 2006, the Suzhou Museum blends beautifully with the historic architecture and contains a choice collection of porcelain, painting and other arts.

Luzhi, Suzhou. There is a morning excursion to Luzhi, a well-preserved and atmospheric ‘water town’ with Ming and Qing residences and numerous bridges across the narrow canals. In Suzhou, a short boat ride leads to the Humble Administrator’s Garden, largest and best known of the Ming gardens here, with carefully composed vistas of water, rocks, plants and pavilions.

Suzhou, Nanjing. Suzhou remains a centre of silk production; witness it first hand at a silk factory. By train (luggage is sent separately) to Nanjing, capital of China under the first three Ming emperors (and again 1912–49). Much of the centre is of a manageable scale and plane trees line the busy streets. The tomb complex of the first Ming emperor, on a wooded hill just outside the walls, constitutes a summation of past traditions and set the pattern for subsequent imperial burials. Overnight Nanjing.

Nanjing, Beijing. Twenty miles long, the city wall built by the first Ming emperor became the longest in the world; much remains, and the Zhonghua barbican is a formidable structure with three courtyards. Nanjing Museum, largely newly built, is one of the best in China, with the complete range of arts – bronzes, jades, porcelain, textiles, painting and furniture. Fly at c. 5.00pm (China Eastern) to Beijing, to which Emperor Yongle removed in 1403 and which became the capital of all subsequent Ming and Qing regimes. First of four nights in Beijing.

Beijing. The Imperial Palace is as impressive and enthralling as one expects (though no longer justifying the epithet, The Forbidden City). Its origins lie with Kublai Khan, but its current form is Ming and Qing. It is a vast rectangular compound surrounded by a formidable wall and a moat with innumerable courts and pavilions, 800 buildings in total. Despite the depredations of the last 150 years, it survives remarkably well, and has quite outstanding collections of arts and precious artefacts.

Beijing and environs. The Ming Tombs 30 miles outside the city are the final resting place of 13 of the 16 Ming emperors. After a 7-km Sacred Way flanked by stone-carved animals and officials, the tomb of Yongle (died 1424) consists of a succession of courts with ceremonial gateways, a great hall and a man-made hill concealing the tomb itself. Returning to Beijing, visit the Summer Palace, an extensive compound of ceremonial halls, temples and walkways around Kunming Lake, repeatedly destroyed and rebuilt in the late 19th cent.

Beijing. Set in a tranquil park, the buildings of the Temple of Heaven are among the highest achievements of Ming designers. Further Ming buildings guard the south of Tiananmen Square, a vast space which is the location of National Museum. This has superb collections of early Chinese artefacts, Zhou bronzes and the whole range of porcelain from Song to Qing.

Beijing, Jinshanling. Free morning in Beijing. Leave at c. 12.45pm and drive out to a particularly spectacular stretch of the Great Wall at Jinshanling which was rebuilt during the Ming Dynasty and regularly saw action. Walk along a section where it climbs, descends and winds over the steep-sided hills. Surrounded by mountains, Chengde was the summer resort of the Qing emperors and is consequently the location of some of the greatest 18th-cent. architecture in China. First of two nights in Chengde.

Chengde. The imperial villa begun by Emperor Kangxi in 1703, essentially Manchurian, consists of single-storey timber buildings around courtyards in a 590-hectare park. There are several 18th-cent. Buddhist temples in Chengde. Puning Si is still an active Buddhist monastery; the many buildings of Putuozongcheng Temple rise to a multi-storey block which is a replica of Lhasa’s Potala Palace, formidable externally, with gaily painted galleried courtyards inside.

Chengde, Qingdongling. Some free time in Chengde before visiting Qingdongling, the Eastern Tombs, burial place in a remote rural setting of five of the ten Qing emperors and the largest tomb complex in China. The Sacred Way has the full panoply of archways, bridges and sculpted guardian figures; one tomb has underground chambers with beautifully carved white marble walls. Spend the night in Beijing.

Beijing to London. The tour ends after breakfast. There is a transfer to the airport in time for the recommended direct flight at c. 11.15am from Beijing to London, arriving at c. 3.30pm (c. 11 hours 15 minutes).

Domestic air travel (economy class) with China Eastern: Nanjing to Beijing (Airbus A320); rail travel from Suzhou to Nanjing (First Class); transport by air-conditioned coach; accommodation as described below; breakfasts, 8 lunches and 8 dinners with wine or beer or soft drinks, water, coffee, tea; all admission charges to museums; all tips for waiters, drivers and guides; the services of the lecturer, tour manager and local guides. Flights: flights from London to Shanghai and Beijing to London are not included in the price of the tour. We will send the recommended flight options (that will be accompanied by our lecturer and/or tour manager) when they are available to book and ask that you make your own flight reservation and inform us of the details. The cost of a World Traveller (economy) seat at the time of going to press is c. £700 and will be available to book towards the beginning of November 2017. Visas are required for most foreign nationals, and not included in the tour price. We will advise on the process.

A good level of fitness is essential. Unless you enjoy entirely unimpaired mobility, cope with everyday walking and stair-climbing without difficulty and are reliably sure-footed, this tour is not for you. Uneven ground and irregular paving are standard and the tour involves a lot of standing around on site and in museums. There are some long coach journeys during which facilities are limited and may be of poor quality. Average distance by coach per day: 58 miles. 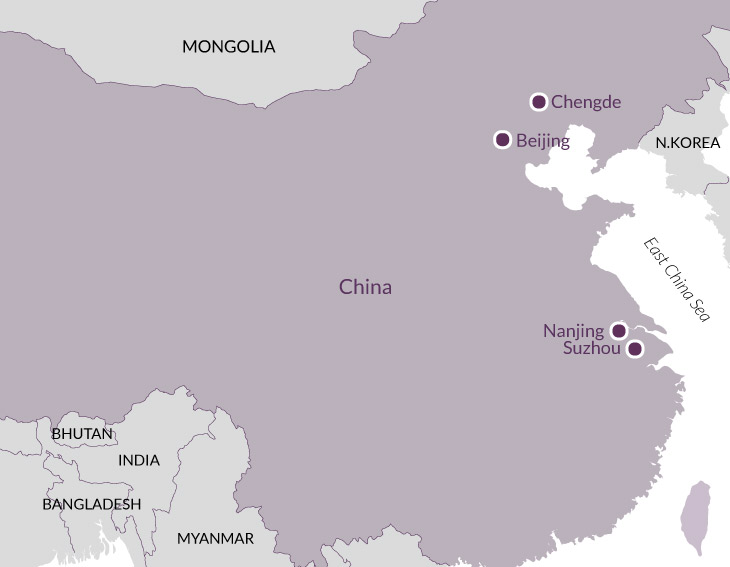 Praise for lecturer Jamie Greenbaum and his previous tours

'Our lecturer demonstrated encyclopaedic knowledge of everything, from the most erudite and arcane aspects of linguistics, archaeology and the latest historical research, to aspects of present Chinese society and politic. He wore his learning lightly and married it with charisma, passion, charm and humour. Quite thrilling really. This is why I choose Martin Randall Travel over any other travel company.'

'Jamie Greenbaum is hugely knowledgeable and very enthusiastic about his topic. He could also answer questions about modern China and was endlessly patient and lots of fun.'

'Another Martin Randall triumph, in that I was taken to see and learn about unforgettable marvels I didn’t know existed before the tour.'