Moldavia & Transylvania - Towns, villages and painted churches on the edge of Europe

Medieval towns which rank with the most picturesque in central and eastern Europe.

During the second Millennium, Romanian history was defined by its geographical juxtaposition to expansionist states. Resistance to foreign domination from the 14th to the 16th centuries led to the gradual establishment of independent principalities – Wallachia (c.1310), Moldavia (1359) and Transylvania (1541).

Four years after the fall of Constantinople (1453), Stefan cel Mare (Stephen the Great) became Prince of Moldavia and for the next fifty years led a spirited defence against constant Turkish invasions, safeguarding much of Western Europe in the process. It was against this backdrop that Stefan and his son, Petru Rares, established almost thirty fortified monasteries and churches deep in the foothills of the Eastern Carpathians, the north-eastern region of present-day Romania.

Peasant armies would gather for battle inside the monasteries’ walls, and to educate and entertain the illiterate soldiers and camp-followers the exteriors of the churches were adorned with paintings of biblical stories and other Christian themes, including a number of anti-Ottoman messages. Byzantine in style as befits their Orthodox congregation, the frescoes have remarkable finesse of draughtsmanship and chromatic refinement.

Although the north-facing walls have been damaged by centuries of rain and wind, the images on the other walls have astonishingly retained their original vivacity, including the remarkable intensity of colour - from the greens of Suceviţa, to the pinks of Humor and the famous blue at Voroneț.

Across the Carpathians, in the former Principality of Transylvania, there remain many Saxon villages which date from the 12th century when north Europeans, predominantly from the Luxembourg region, were recruited to migrate to Europe’s borderlands to farm, build, mine and trade. In due course, they also became bulwarks against incursions from the East. Hence the extraordinary fortifications around their village churches, constructed as citadels to protect the whole village, permanently stocked in expectation of a sudden siege.

The landscapes of the Bucovina (as the northern part of old Moldavia is known) and Transylvania are those of gently rolling hills, dense woods, broad rivers and villages with pastel painted houses and riotous flower beds. Horses are still to be found in harness, ploughing the fields and transporting produce to markets. The towns are marvellous survivals, emerging from decades of neglect to reveal cityscapes as lovely and architecturally interesting as anywhere in the former Austro-Hungarian empire. The welcome you will receive in Romania is sure to be warm and the hospitality generous.

Bucharest. Fly in the afternoon from London Heathrow to Bucharest (Tarom Airlines). First of two nights in Bucharest.

Bucharest. Visit the National Art Museum with its comprehensive collection of 14th- to 20th-century Romanian art. Cotroceni Palace, the former home of Queen Marie and now the official residence of the Romanian Head of State, and the Village Museum with its outdoor collection of traditional peasant houses. Overnight in Bucharest.

Bucharest, Gura Humorului. A guided walk around Calea Victoriei and Revolution Square passes significant buildings and sites from Romanian history, including Stavropoleos Church (1724), a harmonious blend of Renaissance and Baroque features. The Ceaușescu-built Palace of Parliament, monstrous in conception, ghastly in design but stunningly, hilariously and creepily magnificent has to be seen, sadly. Internal flight from Bucharest to Suceava. Drive to Gura Humorului. First of three nights in Gura Humorului.

Humor, Râșca, Voroneț. The interior frescoes at the church at Humor (1530) are unsurpassed. Râșca (1540), located in a remote valley, is a charming working monastery and boasts a Ladder of St John on its South wall. Voroneț Monastery (1488), considered by many to be the most splendid in Bucovina, offers a magnificent Last Judgement. Overnight Gura Humorului.

Arbore, Suceviţa, Moldovița. Arbore’s (1501) superbly executed frescoes on the western wall, with a notably green cast, contain scenes from the Lives of St Nicholas, St George and St Paraskeva. In bucolic surroundings, Suceviţa (1595) with its beautifully preserved frescoes is the last of the great painted monasteries in Bucovina. Moldovița’s (1532) remote position and fortifications have protected its frescoes from invaders and marauders alike. Overnight Gura Humorului.

Târgu Mureș, Sighișoara. Cross the Carpathians into Transylvania. Târgu Mureș is endowed with an array of buildings in a Hungarian version of Arts & Crafts and Secessionist styles. The 1913 Palace of Culture – concert hall, art gallery, ceremonial halls - is as fine as any comparable building in Central Europe. First of three nights in Sighișoara.

Sighișoara, Alma Vii, Mediaș. Located on top of a hill, natural defensiveness supplemented by impressive military engineering, Sighișoara is a highly picturesque little town. Buildings range from the 13th to the 19th centuries with a fine 15th-century church with good furnishings and a superb altarpiece of 1490. Renovated in 2016, the fortified church in Alma Vii gives an insight into the customs of Transylvanian Saxons. Overnight in Sighișoara.

Criș, Mălâncrav, Biertan, Richiș. Located in an exceptionally lovely valley, hillsides striated with terraces for (now vanished) vines, the splendid Gothic church of Biertan soars above its formidable fortifications and the charmingly modest village below. The village church at Mălâncrav is celebrated for the remarkably well-preserved murals of 1421. Overnight in Sighișoara.

Sinaia. The road south passes through the Transylvanian Alps and the royal summer resort of Sinaia. Here visit the summer retreat of the Romanian royal family, Peleș and Pelișor Castles, built, extended and embellished 1875–1914. The sequence of sumptuous interiors, with astonishingly richly carved woodwork, is as fine as any of its sort in Europe, and the original contents are intact. First of two nights in Sinaia.

Prejmer, Brașov, Sinaia. On the way to Brașov, stop at Prejmer for one more fortified church. The inner face of the 12-metre curtain wall is spectacularly encased with emergency accommodation and storage chambers. With a wonderful jumble of facades from, principally, the 18th to the early 20th centuries, Brașov is as handsome a provincial city as anywhere in eastern Europe. The Black Church is the largest Gothic church in Romania, and the interior is enlivened with nearly 100 oriental carpets. Much of the day is free to enjoy the streetscape, the cafes and the museums. Outside the walls, there is a cable car to the top of an adjacent hill. Overnight in Sinaia.

Sinaia, Bucharest. Descend to the Wallachian plain and fly from Bucharest, returning to Heathrow in the afternoon. 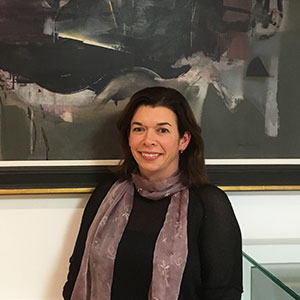 Dr Shona Kallestrup, associate Lecturer in the School of Art History at St Andrews, is a specialist in Romanian art and architecture. She trained at the Warburg Institute and the University of St Andrews, and did part of her PhD research at the Ion Mincu University of Architecture in Bucharest. She is currently a Senior Research Fellow at New Europe College in Bucharest where she supervises an ERC-funded project Art Historiographies in Central and Eastern Europe: an inquiry from the perspective of entangled histories. She has published widely on Romanian architecture and design and is the author of, among other things, Art and Design in Romania 1866-1927: local and international aspects of the search for national expression (East European Monographs, 2006).

Air travel (economy class) on a Tarom Airways flight (Airbus A318) and scheduled domestic Tarom Airlines flight (Airbus 318); travel by private coach throughout; accommodation as described below; breakfasts, 4 lunches and 8 dinners with wine, water and coffee; all admissions to museums, churches and sites; all tips for waiters, drivers and guides; all taxes; the services of the lecturer and tour manager.

Athenee Palace Hilton, Bucharest: centrally located 5-star hotel with excellent service and facilities. Best Western Bucovina, Gura Humorului: modern 3-star hotel 37km south-west of Suceava, ideally located for exploring the surrounding area Bathrooms have showers, not baths. The standards of comfort, equipment and service are quite acceptable and commensurate with its category. Mercure Binderbubi Hotel & Spa, Sighișoara: a traditional and comfortable 4-star hotel, located close to the city centre. International Hotel, Sinaia: a modern 4-star conference hotel situated in the foothills of the Bucegi Mountains. Single rooms are doubles for sole use throughout.

Participants must be reasonably fit as you will be on your feet for long periods. The tour would not be suitable for anyone who has difficulties with everyday walking and stairclimbing. Some long coach journeys and one internal flight. Average distance by coach per day: 74 miles. 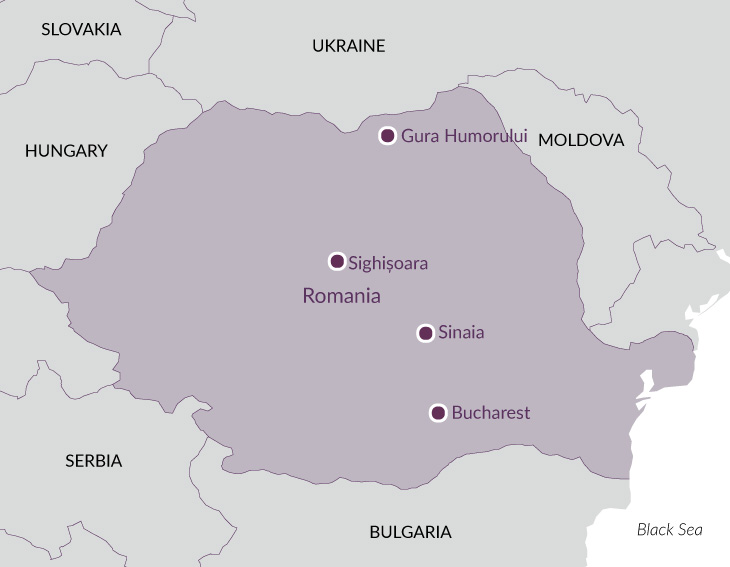