Treasures of Moravia - Town and countryside of a forgotten province

A little-known corner of Europe with a fascinating architectural patrimony.

For a couple of decades in the ninth century the Great Moravian Empire encompassed not only Czech and Slovak lands but also parts of what are now Austria, Hungary and Poland. This agglomeration of territories rapidly disintegrated, and neighbouring Bohemia began to take shape and take priority.

Ever since then Moravia has been the lesser member in an enduring partnership with Bohemia. Yoked together, they fell together under Habsburg suzerainty in 1526, emerged together in 1920 to form (with Slovakia) the new Czechoslovakia, and stayed together in 1993 to form the Czech Republic (shorn of Slovakia).

It may have been politically provincial but it was a prosperous area and quite close to the chief metropolis of Central Europe, Vienna. Its rich architectural and artistic patrimony includes fine Renaissance country houses, outstanding Baroque palaces and churches, bizarre buildings by Jan Santini-Aichel, historic gardens both formal and landscaped, galleries of fine and decorative art, much beautiful streetscape in towns and villages, and rolling landscape.

Moravia gets better every year. Architectural conservation proceeds apace, towns are smartened up, hotels and restaurants are improving, and more and more museums and historic buildings are refurbished and better presented. In spite of these developments Moravia is much less on the tourist track than Bohemia and remains fairly unspoilt.

Fly at c. 9.45am from London Heathrow to Prague and drive south into Moravia. Telč is a tiny town with the loveliest square in the Czech Lands, lined with Renaissance and Baroque façades above a meandering Gothic arcade. First of two nights in Telč.

Vranov nad Dyjí, Jaroměřice. Perched high above a gorge close to the Austrian border, the great oval Hall of Ancestors at Vranov is one of the most impressive Baroque creations in Central Europe, the creation of the greatest architect and greatest painter in the region at the time. The splendid mansion at Jaroměřice sprawls irregularly, but contains some wonderful 18th-century interiors and an enormous chapel. Overnight Telč.

Telč, Naměsť nad Oslavou, Rajhrad. The castle in Telč was extended in stages during the 16th century with a series of halls of brilliant, eccentric decoration around elegant, arcaded courtyards; a jewel of the Northern Renaissance. Dramatically sited above a little town in the valley below, the fabric of the castle at Naměst nad Oslavou dates largely to the later 16th century. There is a large Baroque hall with frescoes by Carpoforo Tencalla, 1670–73. Rajhrad monastery was built in the 18th century on a vast scale, and has a magnificent church by Santini-Aichel, the genius of Bohemian Baroque. First of five nights in Brno.

Brno. The present capital of Moravia, and the second largest Czech city, Brno has a wealth of Gothic and Baroque churches and fine architecture of the 18th, 19th and 20th centuries. A walk includes the medieval town hall, the fine Gothic church of St James and the Baroque Minorite church, among other treasures. Villa Tugendhadt is a superb house by modernist architect Ludwig Mies van der Rohe.

Bučovice, Plumlov, Olomouc. Bucovice has a splendid Renaissance mansion with arcaded courtyard and stucco interiors of a quality virtually without equal in northern Europe. The rumbustious 17th-century mansion at Plumlov has probably the richest façade columniation of any building in Europe. Olomouc, former capital of Moravia, has many fine churches, a Romanesque episcopal palace and Renaissance town hall. Several magnificently sculpted fountains are spread through a large tract of highly attractive historic townscape, surely the loveliest little city in Europe which is not yet on the tourist trail.

Valtice, Lednice. Adjoining the Austrian border are two great houses which were the property of the Liechtenstein family from the 13th century to 1945. The redoubtable residence at Valtice is largely of the 17th and 18th centuries while the house at Lednice is a magnificent Gothic Revival mansion with outstanding woodwork interiors. Here also are monumental Baroque stables designed by Fischer von Erlach and an extensive park with large-scale follies and pavilions.

Žd’ár nad Sázavou­. Drive to the pilgrimage church at Zd’ár nad Sázavou, a Baroque-Gothic creation by the maverick architect Santini-Aichel and among the most bizarre and fascinating buildings of the 18th century. Continue to Prague for the flight to Heathrow, arriving c. 6.15pm.

Air travel (Euro Traveller) on scheduled British Airways flights (Airbus A320); travel by private coach; accommodation as described below; breakfasts, 4 lunches (including 1 packed lunch) and 5 dinners with wine; admission charges for all museums and places visited; all tips for waiters, drivers and guides; all airport and state taxes; the services of the lecturer and local guide.

Hotel U Hraběnky, Telč: the only usable hotel for many miles around, this 4-star hotel is fairly old-fashioned, if adequately equipped. Grandezza Hotel, Brno: a newly opened boutique hotel, located in the heart of Brno’s historic centre The Green Market. Single rooms are doubles for sole use.

There is quite a lot of walking on this tour, some of it up slopes or up steps. To be able to enjoy the tour it would be essential to manage daily walking and stair-climbing without any difficulties. There is also a fair amount of driving. Average distance by coach per day: 121 miles. 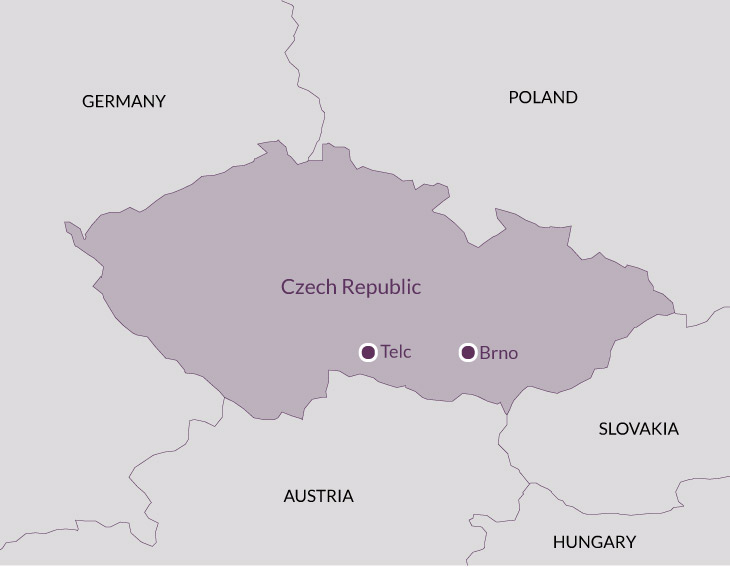 'Interesting mix of history and nature.'

'The lecturer was quite amazing.'

'A very professionally organised and conducted tour. Very enjoyable. I would definitely do another Martin Randall tour.'

'The itinerary presented a balance of old and new, secular and religious sites.'

'The lecturer is a master of his subject, very enthusiastic in his lectures, giving us a dizzying amount of information. He is a very pleasant and approachable, has a sense of humour and was ever patient in dealing with questions.'