Pioneering architecture from the early settlers to the present, with a focus on the extraordinary achievements of the mid-20th century and the architects responsible.

Some of the country’s finest art collections and public buildings, private houses and neighbourhoods, with a number of visits by special arrangement.

A variety of landscapes from the Atlantic coast to the rolling Berkshire Hills, set against the colour of the New England Fall.

New England has seen the making of Modern America not once, twice but three times. Firstly, there were the early pioneers and their chaste farmsteads, churches and small towns. Then in post-revolutionary times came the confident urbanity of the new Republic, and contrastingly, the rural asceticism of the Transcendentalists and other idealists. Finally, before, during and after World War II, a new wave of ambition established the expression of mid-twentieth-century America.

What unifies all three architectural waves is an overriding restraint and a setting within the extraordinary light and colour of the New England landscape. The earliest buildings possess a spare timber elegance that reaches down through the Shaker villages to Walter Gropius’s invention of a local Bauhaus. This austere simplicity is matched by the refined brickwork of Federal Boston, the arcadia of American academia and the sophisticated use of concrete as a ‘cast stone’.

Threaded through New England’s river valleys, hills and along its coast are some of the finest twentieth-century private houses by architects including Frank Lloyd Wright, Josep Lluís Sert, Philip Johnson and ‘the Harvard Five’. Their seclusion is balanced by some of America’s most magnificent public buildings and art collections in Boston, Harvard and Yale – as well as the delightful Frelinghuysen studio in the russet hills of Lenox.

Concord, Lincoln, Boston (MA). Drive to Walden Pond, heart of the Transcendentalist movement, where Henry Thoreau lived in a cabin on the water’s edge in simple seclusion. Nearby, the pretty town of Concord saw the start of the American War of Independence. Visit the museum, with Thoreau memorabilia. Walter Gropius built his family home (1938) in a meadow outside Lincoln; modest, light, with the original furniture and artwork. Overnight Boston.

Manchester, Exeter (NH). In the leafy suburbs of Manchester the Zimmermans commissioned Frank Lloyd Wright to build their Usonian home (1950). See also the Currier Museum of Art, a small but good collection including some American Modern. On the campus of Phillips Exeter Academy is Louis Kahn’s monumental library (1971). The detailing is superb inside and out. Overnight Boston.

Boston, Stockbridge (MA). Spend the morning at Boston’s Fine Arts Museum, a collection of staggering wealth, with its new extension by Foster. An increasingly beautiful drive west into the Berkshires leads to Stockbridge, a small town of verandah-clad villas with our historic hotel at the centre. First of two nights in Stockbridge.

The Berkshires (MA). The Hancock Shaker Village provides exquisite examples of Shaker architecture and design. In the woods outside Lenox, a private visit to the former home and studio of abstract artists George Morris and Suzy Frelinghuysen. The house is pure modernism and the art amassed by the couple, superb. Overnight Stockbridge.

New Canaan (CT). The day is spent in the woodland town of New Canaan where some of the great US architects, ‘the Harvard Five’, experimented in the mid-20th century. Private tour of Philip Johnson’s pristene Glass House (1949), as well as his painting and sculpture galleries. Among the other visits, the home of Eliot Noyes (1954; subject to confirmation) and Landis Gores’ pool pavilion (1960). Overnight New Haven.

New Haven. The final morning is dedicated to the Yale University Art Gallery (1953), one of the best in the US, the art enhanced in its setting by Kahn’s use of concrete. Afternoon drive to New York’s JFK Airport for the flight departing 7.30pm.

Arrive London Heathrow at 7.30am.

A number of these buildings are not usually open to the public and it is possible we will not be able to include everything listed.

Flights (World Traveller) with British Airways (Boeing 747); private coach throughout; accommodation as described below; all breakfasts, 1 light lunch and 5 dinners with wine, water, coffee; all admissions; all tips; all taxes (federal, state, city and airport); the services of the lecturer and tour manager.

British citizens can enter the USA without a visa by applying for a visa waiver online. We will advise on this. If you have travelled to Iran, Iraq, Syria, Sudan, Yemen, Libya or Somalia since March 2011 you are not eligible for the waiver and will need to apply for a visa.

There is a lot of walking and standing around and getting on and off coaches. With transatlantic flights and three hotels, the tour is tiring. Average distance by coach per day: 68 miles. 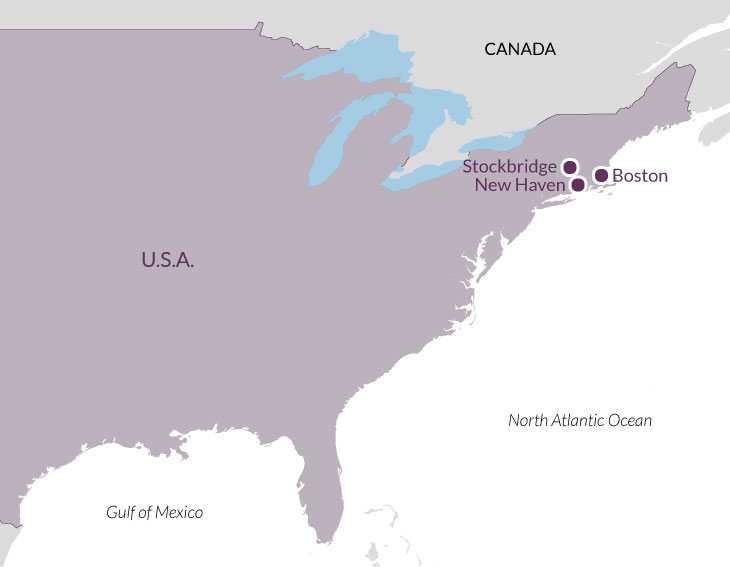 The lecturer was extremely knowledgeable and the tour manager outstanding in her day-to-day organisation, and both were great company. Hotels and meals were excellent.

This is the 6th time we have done a tour with Martin Randall Travel and they never disappoint. The standard of tour management from pre-planning to on-the-road, is excellent, and the lecturers are highly qualified academics in their fields.