Wide-ranging exploration of the natural and man-made beauties of one of the least visited regions of England.

Northumbria is border country in depth. The Romans had a bumpy ride in their attempts to fix the limits of their empire and pacify the populace, despite the extraordinary achievement of Hadrian’s Wall. After the Norman Conquest the region was supposedly within England but was subject to frequent Scottish incursions and effectively ruled by a handful of clans beyond the writ of the English Crown. To this day castles characterise the region more than country houses, and yet those houses that exist share an austere aesthetic.

But perhaps the most striking and alluring consequence of its buffer-zone heritage is the landscape. Remote and sparsely inhabited, ruffled by majestic undulations and etched with dry stone walls, rugged uplands mixing with picturesque farmland, Northumbria has some of the most enthralling scenery in all England. Such marginal land was a magnet to monastic foundations, and outstanding medieval church architecture is another feature.

And yet, by extreme contrast, the
region became one of the powerhouses of the industrial revolution. The Tyneside conurbation has some of the most fascinating cityscapes in Britain. Beyond the city, wealth and innovation led to the great Victorian country estate such as Norman Shaw’s Cragside.

Northumbria was far larger than the (relatively) modern counties of Northumberland, Durham and Tyne and Wear. This tour presents a grand sweep of history, architecture and landscape by selecting the finest sights in an itinerary that is balanced in content and pace.

Newcastle-upon-Tyne, Durham. The coach leaves the hotel at 12.25pm and Newcastle Central Station at 1.30pm. Drive to Durham Cathedral, one of the great monuments of Romanesque Europe, its glories enhanced by a hilltop site in one of the loveliest little cities in England. Return via St Paul’s church in Jarrow, the monastery home of the Venerable Bede (ad 673–735), one of the greatest intellectuals of the Middle Ages. First of five nights in Newcastle.

Newcastle. Built on high ground beside the Tyne, Newcastle has many architectural excitements, from a Norman keep to innovatory bridges. Grey Street and Grainger Street date to the 1830s, Classicism at its grandest and most picturesque. The Laing Art Gallery is particularly strong on Victorian art, including the local artist John Martin. There are special visits to the Literary and Philosophical Society, opened in 1825, and the Gothic Revival library at the Mining Institute. Descend to the quayside for dramatic vistas and post-industrial regeneration – Wilkinson Eyre’s Millennium Bridge and Foster’s Sage Gateshead.

Bywell, Hexham, Hadrian’s Wall. Nestled in the Tyne Valley, the village of Bywell has two fine churches, one with a Saxon tower. The delightful town of Hexham grew up around an abbey founded in ad 674; the grand 13th-century church survives. An optional walk along Hadrian’s Wall from Housesteads (3½ miles), scenically and archaeologically perhaps the most spectacular stretch. Non-walkers visit Vindolanda, site of a Roman town; ongoing excavations are yielding exciting discoveries.

Alnwick, Edlingham, Cragside. A beautiful drive via Edlingham to see the Norman church and remains of a 12th-century hall house. Externally still a formidable medieval fortress, Alnwick Castle, seat of the Dukes of Northumberland, has sumptuous interiors and a superb painting collection. Cragside, built for Sir William Armstrong, is the masterpiece of Norman Shaw and the interiors form a wonderful sequence of late-Victorian taste and technology.

Seaton Deleval, Woodhorn, Warkworth. At Tynemouth see the Priory, Castle, and the North and South piers at the mouth of the Tyne – astonishing pieces of engineering. A shell, baroque Seaton Delaval is a masterpiece by Vanbrugh (bought by the National Trust in 2009). Woodhorn Colliery is one of the best surviving examples of a 19th-century coal mine. More palace than castle, the 15th-century Warkworth Castle towers above the town.

Craster, Dunstanburgh. En route to Craster visit Brinkburn, a wonderfully preserved 12th-century Augustinian Priory. Lunch in the pretty seaside town of Craster, kipper capital of the UK. A glorious coastal hillside walk to Dunstanburgh Castle (2½ miles round trip; optional), in splendid isolation on a rocky promontory. Non-walkers visit the gardens at Howick Hall. Drive to the hotel, Doxford Hall, which is 6 miles away. First of three nights here.

Berwick-upon-Tweed, Norham, Bamburgh. The border town of Berwick has been much fought over by England and Scotland in the past. It is protected by the most complete set of ramparts in England. Barracks, Cromwellian church and Royal Border Bridge. Drive into wild Northumberland to the ruins of Norham Castle, once one of the strongest border castles and finally defeated by James IV of Scotland. Some free time at the hotel or in Bamburgh.

Farne Islands, Holy Island. Drive to Holy Island to see Lindisfarne Priory and the Castle which was later converted by Lutyens into Edward Hudson’s country home. Sail on a privately chartered boat to the Farne Islands and Inner Farne, famously the setting of Grace Darling’s heroism and home to some of England’s richest birdlife. St Aidan lived as a hermit here before establishing Lindisfarne Priory, as did St Cuthbert who later became the patron saint of Durham.

Newcastle. Wallington Hall dates to 1688 but was refurbished in the mid-18th and mid-19th centuries, the latter resulting in an arcaded two-storey hall with scenes of Northumbrian history painted by William Bell Scott. Drive south to Newcastle, dropping off at the station by 1.45pm and at the Jesmond Dene House c. 2.30pm.

National Trust or English Heritage members (with cards) will be refunded c. £50.

Hotel accommodation; private coach throughout; breakfasts, 1 lunch and 7 dinners with wine, water and coffee; all admissions; private boat to the Farne Islands; all tips; the services of the lecturer and tour manage.

Jesmond Dene House, Newcastle. A 19th-century mansion in a quiet wooded suburb which opened as a hotel in 2007 and was awarded César City Hotel of the Year in 2013; stylish, very comfortable, exceptional service, good amenities, garden, excellent restaurant. Doxford Hall, near Alnwick: a 4-star, early 19th-century country house designed by John Dobson; bedrooms have a traditional décor and there is a spa and gardens. Single rooms are doubles for sole use throughout.

There is quite a lot of walking involved, even without the two optional country walks. Coaches can rarely park near the sites and some places visited are extensive. Average distance by coach per day: 47 miles. 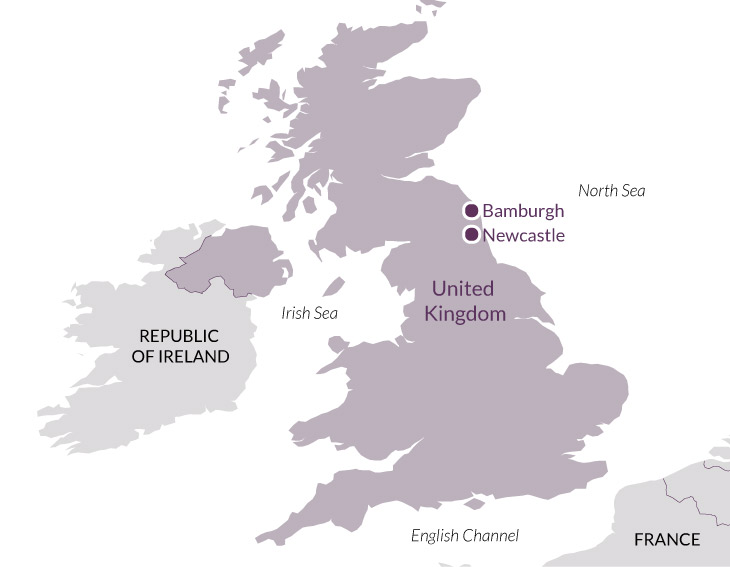 'A thoroughly enjoyable tour thanks to the efficiency and friendliness of the tour manager and lecturer.'

'Very well planned and executed. Choices had to be made and I thought the selection was well balanced and of high quality. There were several pleasant surprises.'

'A well-balanced itinerary which gave me an overall impression of the area and an idea of the places I might like to re-visit.'