A tour which ties together the drama of the landscape with the architecture, art and design.

Wide range of museums and galleries from the Viking Ship Museum in Oslo to the glacier museum in Mundal; Fine Arts in Bergen and the Hedmark in Hamar.

Journeys of immense beauty by rail and boat are a major part of the tour.

Special arrangements include visits to private villas, a ferry chartered for our group and a talk by the curator of the National Museum of Architecture.

For most of the twentieth century, the legend of Scandinavian art, design and architecture grew and grew; an austerely simple yet humane design effortlessly in harmony with nature. Yet somehow Norway was never part of this. Facing the North Atlantic it seemed distant, more attuned to the brilliant melancholy of Grieg, Ibsen and Munch. But that is only a part of the story, and this tour combines landscape, art and design to give a fuller sense of Norway’s extraordinary beauty and creativity.

In the folds of the fjords there have always been some of the most remarkable wooden buildings and towns – and boats – in Europe, while already in the 1930s Arne Korsmo’s beautiful villa above Oslofjord showed a particular Norwegian modernism. In the last two generations, bolstered by the extraordinary, well-invested wealth of their oil reserves, the Norwegians have set about designing a society to match the beauty of their setting, and place them at the forefront of contemporary design.

We begin in Oslo, which in the last few years has become one of Europe’s most civilized and elegant cities, now crowned by Snøhetta’s astonishing Opera House. Its sheltered location and wide bourgeois streets could not contrast more than with the drama of Bergen and its dense wooden Hansa Bryggen where we end. However, both cities host great collections of paintings that show the fine eye and great skill with which Norwegians have observed their milieu.

As with everywhere else in Norway, water dominates. In fact the story of Norwegian design really begins with our visit to the Viking longboats and continues at the Urnes stave church which overlooks the bucolic Sognefjord two hundred miles inland. We travel there from Oslo on one of the most beautiful train journeys imaginable, and then sail across the fjord to Balestrand. We leave for Bergen again by boat, following the fjord to the Atlantic.

It is in the tiny town of Mundal, lying in the shadow of Norway’s largest glacier, that Sverre Fehn built his ‘Bremuseum’ (glacier museum). Fehn, who died in 2009, produced an architecture of intelligence and poetry that has made him the subject of veneration unmatched since Alvar Aalto. His Hedmark museum in Hamar, one of the most significant interpretations of an historic site in Europe, is simply extraordinary.

Oslo. Fly at c. 9.20am from London Gatwick to Oslo (Norwegian). Late-afternoon walk through the city (Royal Palace, University, Parliament) to the new waterfront developments by Niels Torp and others. The latest addition here is Renzo Piano’s contemporary art gallery. First of four nights in Oslo.

Oslo. Begin with the National Gallery, a small but fine collection of Norwegian art including a room dedicated to Edvard Munch. Walk to two buildings by Sverre Fehn: Gyldendal publishing house (2007) and the National Museum of Architecture (2008). Talk here by the senior curator. Continue by coach to Snøhetta’s glacial waterfront opera house (2008). End on Bygdøy – museum island – at the magnificent Viking Ship Museum.

Hamar, Oslo. Drive north to the ancient city of Hamar, beautifully sited on the shores of Lake Mjøsa. Here is Fehn’s greatest work, the Hedmark Museum and Bishop’s Palace (1967–79). See also the adjacent ruins of Hamar Cathedral, now housed in a ‘crystal palace’ by Lund & Slaatto (1998). Back in Oslo, visit the chthonic church of St Hallvard with its inverted dome and rugged brickwork – an earlier work by Lund & Slaatto.

Oslo. Residential Oslo is represented today with a visit by special arrangement to an exquisite modernist villa by Arne Korsmo: the Villa Stenersen (1938). High above the city the Holmenkollen ski jump is a new landmark (JDS, 2010) with magnificent views. Return to the centre for some free time. Suggestions include taking the ferry to Bygdøy, home to Kon-Tiki, or visiting the Åkerhus (fortress) and Astrup Fearnley Museum of Modern Art.

Oslo to Balestrand. Spend the day travelling into the Western Fjords – a journey of considerable drama and beauty. Train at c. 8.30am train from Oslo, disembarking at Myrdal, a remote junction high above the Raundal Valley (journey time: c. 4 hours 45 minutes). Here join the famed Flåm railway, a spectacular fifty-minute descent to the shores of the Aurlandsfjord. The final leg is by boat (private charter) from Flåm to Balestrand. Two nights in Balestrand.

Balestrand, Mundal, Urnes. Drive to Mundal, a pretty village tucked between glacier, mountain and water. Here, sitting as if a terminal moraine, is Fehn’s glacier museum (1991), a complex building responding to the dramatic landscape. Drive to the village of Solvorn, from where we embark to Urnes. Walk up to the stave church, among the oldest and most celebrated in Norway, with carvings dating to the 12th century. Its beautiful orchard setting is on a promontory above Lustrafjord (a branch of the Sognefjord) with views north and south.

Balestrand to Bergen. Lunch in the hotel before boarding the boat along Sognefjord to the Atlantic and Bergen, a route taken by many a British tourist in the 19th century (c. 3 hours 45 minutes). Arrive at the hotel in Bergen c. 9.00pm.

Bergen. A lively port of immense charm flanked by wooded hills. Walk along the boardwalks of the Bryggen, the colourful mediaeval merchants’ quarter and home to the Hanseatic Museum. Ride the funicular train up Mount Fløyen for spectacular views. Continue to the heart of the modern city, including the museum quarter laid out from the 1920s around a lake. The Fine Arts Museum is superb for modern and Norwegian art.

Bergen. Free morning. Suggestions include the fish market, the Bryggen Museum or the Decorative Arts Museum. In the afternoon depart for Troldhaugen, the idyllic summer home of Edvard Grieg. See his villa and waterside studio, and also his tomb. Private recital in the concert hall here (to be confirmed). Continue to Bergen airport and fly to London Gatwick arriving c. 8.10pm.

Flights (economy) with Norwegian (Boeing 737); travel by private coach for airport transfers and excursions; rail and boat travel as indicated in the itinerary (including private charter Flåm to Mundal); hotel accommodation; breakfasts, 3 lunches and 6 dinners with a glass or two of wine, water and coffee; all admissions; all tips; all taxes; the services of the lecturer.

Grand Hotel, Oslo: 5-star hotel in the heart of the city; a short walk from the National Gallery. Dragsvik Fjordhotell: 3-star family run hotel with panoramic views of the fjord and the Jostedal Glacier. Rooms are basic but comfortable and the decor is traditional. Clarion Hotel, Bergen: an attractive 4-star hotel on the waterfront in the Bryggen; bedrooms are smartly furnished with rich colour schemes.

This is a long tour with a lot of travelling – by coach, boat and train. You need to be fit and able to carry or wheel your own luggage. Walking is often on uneven ground and uphill. Average distance by coach per day: 32 miles. 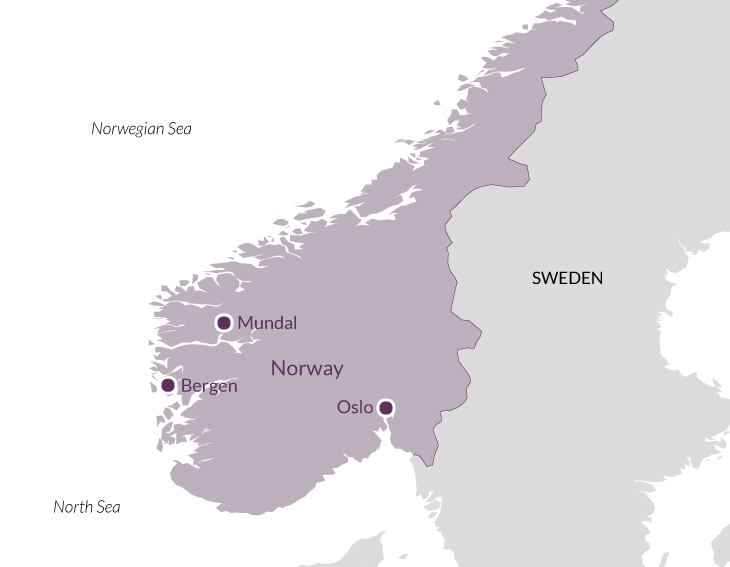