In-depth look at a fascinating and relatively unknown portion of WWII history.

Excellent hotels on both islands.

The Channel Islands, the oldest possession of the British Crown, were the only part of the British Isles to be occupied by German forces during the Second World War. Following the fall of France in June 1940 the British government withdrew from the islands, their exposed position in the bay of Saint-Malo having rendered them strategically untenable. On 19 June 1940, the islands were demilitarised, and it was announced that those who wanted to be evacuated should register forthwith.

German forces landed in Guernsey on 30 June 1940 and in Jersey the next day. There was no organised resistance movement against German forces – only acts by individuals or small groups. The occupying forces enforced a number of restrictions such as a nightly curfew and censorship of the press. In 1942 the deportation began of about 2,000 British-born Channel Islanders to internment camps in Germany. Other residents were deported to concentration camps.

During the occupation the islands were heavily fortified as part of Hitler’s ‘Atlantic Wall’. Construction was overseen by the German Forces and the Organisation Todt – a paramilitary engineering outfit. Forced labourers were imported to build the fortifications. This included Spanish Republican refugees from France who had been surrendered by the Vichy government, and people rounded up in Eastern Europe who were treated as work-slaves. Visitors to the islands are often struck by the scale of construction; a staggering 10% of German resources spent on the Atlantic Wall were used to fortify the Channel Islands, much of which remains visible today. This has been deliberately preserved by local volunteers, as a reminder of this chapter in Channel Islands history.

The D-Day landings in June 1944 came as both a blessing and a curse. Whilst they marked the beginning of the end for the German occupiers who relied on supply lines from the continent, they also meant that food imports were cut. As supplies dwindled, islanders faced starvation. However, following trilateral negotiations involving the Foreign Office, the Germans and the Red Cross, the SS Vega was authorized to deliver food, saving the lives of many islanders.

The islands were finally liberated on 9 May 1945, the day after VE Day. HMS Beagle and HMS Bulldog arrived in Jersey and Guernsey respectively, with on board British officers who finalised the unconditional surrender of German forces in the islands.

London to Jersey. Fly at c. 11.05am (British Airways) from London Gatwick to Jersey. The vast complex of the Jersey War Tunnels provide an excellent introduction to the background of the Occupation of Jersey including individual wartime stories and award winning galleries. It also provides an idea of the scale and intent of the occupying forces in defending the Islands. First of two nights in Jersey.

Noirmont Point, St Ouen, St Brelades. The dramatic coastline on Jersey’s western and northern fronts were some of the most heavily defended parts of the island. The coastal artillery batteries protected German shipping between Cherbourg and Brest as well as providing all-round defence from the air and sea. The location of these batteries provide the opportunity to look inside these impressive outposts while enjoying some of Britain’s finest coastal scenery. St Ouen’s Bay, one of the island’s most picturesque bays, was one of the most vulnerable and is now the location of the privately owned Channel Islands Military Museum.

St Martin, St Helier, St Peter Port. In 2011 the Jersey Occupation Collections held at Jersey Archive were inscribed on the unesco UK Memory of the World Register. After a guided tour and lecture enjoy some free time in St Helier before a short flight to Guernsey for the first of two nights.

Fort Hommet, Pleinmont, St Peter Port. Guernsey, the first Channel Island to be occupied, has much in common with its sister Island but is distinctly different. The excellent German Occupation Museum displays an impressive collection of occupation memorabilia while Fort Hommet and Pleinmont Tower on the island’s western coast reveal the scale of German defences that contributed to Hitler’s Atlantic Wall. The afternoon is free to wander the charming streets of St Peter Port, considered one of the prettiest of Channel Island towns.

St Peter Port. The headquarters of the German Naval Commander Channel Islands handled all the important radio signals traffic for the German forces in the Channel with messages being transmitted and received by naval codes using the Enigma enciphering machines. Housed in the original bunker, the headquarters have been accurately restored providing a rare opportunity to see inside a German military operations centre. Fly c. 4.30pm (Aurigny) arriving Gatwick at approximately 5.30pm.

Flights (world traveller) with British Airways (Airbus A319) and Aurigny (Embraer 195), hotel accommodation; travel by private coach; breakfasts, 2 lunches, 4 dinners with wine, water and coffee; all admissions; all tips; the services of the lecturer and tour manager.

The Somerville Hotel, Jersey: located above the picturesque St Aubin’s Bay, the hotel enjoys wonderful sea views and excellent facilities (4-stars). Old Government House, Guernsey: former Governor’s residence, this historic hotel is considered the best on the island and is located in the heart of St Peter Port (5-stars). Single rooms are doubles for sole use.

This tour would not be suitable for anyone who has difficulty with everyday walking. The location of some of the visited sites are on exposed cliff paths so a good level of fitness and surefootedness is essential. Our hotel in Jersey is located part way up a steep hill and is not accessible by coach. Military bunkers often have numerous steps and low ceilings; sufferers of claustrophobia might struggle in some of the inner chambers. 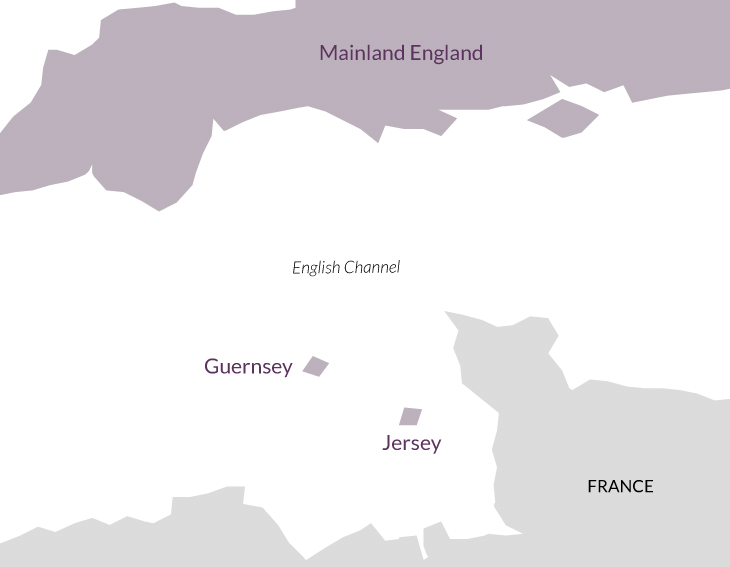