Palestine, Past & Present - Archaeology & culture on the West Bank

A pioneering tour which includes the major archaeological sites and the most significant historic buildings on the West Bank.

There are two nights in East Jerusalem.

Provides an insight into a territory much in the news but little visited in recent years.

Palestine is a land of limestone hills with the humped contours of a children’s picture-book. The surface is generally a grey-green impasto of olives and scrub, sometimes beautified with the striations of ancient terraces, farmed intermittently in clefts and nooks, grazed where vegetation is harsh and coarse. Then there are the hills of the Judaean desert, crinkled, barren rock, khaki with a dusting of white.

Straggling along crests and down hillsides, Palestinian towns and villages are given visual unity by white limestone cladding – a requirement introduced during the British mandate and still adhered to. They express individualism, enterprise and struggle. By contrast, the Israeli settlements crowning many a peak are fortress-like high-density clusters.

Recent history and current affairs cannot be ignored in this part of the world but the focus of the tour is archaeology, architecture and more distant history. Scattered across the West Bank are some very remarkable sites and buildings. There are unique remains from the very earliest periods, some fascinating remnants of the Canaanite and Israelite civilisations of the Bronze and Iron Ages, often with biblical associations. The creations of Herod the Great, among the most impressive structures of the ancient world, feature prominently, and there are significant remains from the Hellenistic, Roman, Byzantine, Umayyad, Crusader and Ottoman eras. A particular feature are the desert monasteries, often in dramatic and inaccessible locations.

Tourism is hardly new to Palestine: pilgrimage tours follow well-worn routes, quickly bouncing back after intermittent periods of strife, but other sorts of specialist tours are relatively rare. There has been investment in hotels and infrastructure in recent years, and the people are very welcoming.

Fly at c. 8.10am (British Airways) from London Heathrow to Tel Aviv (Israel) and drive through the Separation Wall to Bethlehem (Palestine). Reach the hotel in time for dinner. Three nights are spent here.

Herodion, Solomon’s Pools, Mar Saba. Herodion is an extraordinary fortified palace built by King Herod 24–15 bc on an artificial hill. There are extensive remains of defences, cisterns and baths and superb views. It was supplied with water from ‘Solomon’s Pools’, a series of reservoirs 9 km away, visited next. Return to Bethlehem for lunch and drive into the Judaean desert to visit the Orthodox monastery of Mar Saba, perched in a gorge and with a beautiful chapel (limited access for women). Overnight Bethlehem.

Hebron (Al-Khalil), Church of the Nativity. The Herodian phase of the Tomb of the Patriarchs in Hebron is one of the most impressive buildings of the ancient world. The interior is Crusader and Mamluk, and is now divided between Muslims and Jews. We visit the Muslim mosque which contains the cenotaphs of the Patriarchs. We also see a 19th-century Russian church here. Hebron is volatile and this visit may be cancelled at short notice. The Church of the Nativity in Bethlehem, not significantly changed since 339 ad, is one of the greatest of Early Christian buildings; five aisles and monumental Corinthian colonnades. (An extensive restoration programme, which has required parts of the building to be closed, is almost completed.) Overnight Bethlehem.

Jerusalem. Spend the day in the Old City of Jerusalem (ruled de facto by Israel but claimed by Palestine). This is the most extraordinary city on Earth, a vibrant Middle-Eastern enclave split between rival communities and composed of medieval and ancient masonry. Walk along the city’s impressive ramparts, visit the Church of St Anne, the Church of the Holy Sepulchre, Constantinian and Crusader. First of three nights in Jericho.

Jericho, Nabi Musa, Hisham’s Palace. The palm-shaded oasis of Jericho is a place of superlatives, the world’s most low-lying town and arguably its oldest continuously inhabited one. The Monastery of Temptation is inserted in the high cliff 350m above Jericho and can now be reached by cable car. Nabi Musa, according to Muslim tradition, is the burial place of Moses and has Mamluk, Byzantine and Ottoman parts. Hisham’s Palace is a remarkably well-preserved 8th-century Umayyad palace. Overnight Jericho.

Jericho, Qumran. The lowest strata of Tell es-Sultan, the site of ancient Jericho, are 10,000 years old and there is a unique tower of c. 7000 bc, as well as impressive Bronze Age remains from the third and second millenniums bc. We then visit Qumran, the settlement nearest to the Qumran Caves where the Dead Sea Scrolls were hidden. Optional excursion to the Monastery of St George in Wadi Kelt. Overnight Jericho.

Sebastia, Nablus, Jerusalem. Amid lovely countryside north-west of Nablus, Sebastia (Samaria) is a fascinating archaeological site with extensive remains spreading over a hill, principally Roman and Hellenistic but reaching back much earlier to the time of the Israelite kings, Omri and Ahab. Mount Gerizim affords a panorama of the Nablus area and is home to a 5th-century church, remains of a mosque and a castle of Salah ad-Din era. First of two nights in East Jerusalem.

Jerusalem. Haram ash-Sharif, alias the Temple Mount, Herod’s great retaining wall supporting a platform now adorned with some of the earliest and finest Islamic buildings. The Rockefeller Museum, formerly the Palestinian Archaeological Museum, has finds from some of the sites visited on this tour, including Hisham’s Palace, ancient Jericho, Samaria and Jerusalem. Evening tour and dinner at the Albright Institute. Overnight East Jerusalem.

Jerusalem. Free morning in Jerusalem, with the option of visting the American Colony Archives. The flight lands at London Heathrow c. 8.00pm.

Flights (economy class) on scheduled British Airways return flights (aircraft: Boeing 787); private coach for all other journeys; hotel accommodation as described below; breakfasts, 7 lunches and 7 dinners with wine, water and coffee; all admissions; all gratuities; all taxes; the services of the lecturer, tour manager and a local guide.

Are obtained on arrival at no charge for most nationalities.

This is an active, primarily outdoors tour involving a lot of walking and standing. Terrain can be rough and paving uneven. Sure-footedness and being comfortable spending much of the day on one’s feet in the heat is essential. Average distance by coach per day:  c. 41 miles.

Working in partnership with the Palestine Exploration Fund

By booking on this tour, clients will automatically become PEF members, have access to the extensive PEF library and resources as well as benefit from expert advice on the ancient Levant from members of staff. 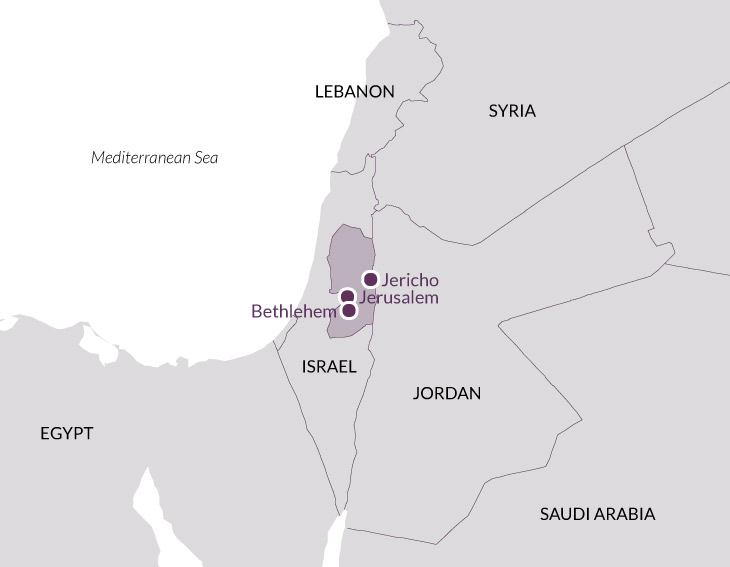 'The visits to Nablus and Hebron were outstanding.'

'My whole attitude to the West Bank has changed.'

'The itinerary was so interesting and varied.'