Palladianism in Southern England - From Inigo Jones to Robert Adam

An unprecedented, comprehensive survey of Palladian architecture in Southern England.

Many special arrangements and private visits to some of England’s finest houses.

Most of the most important surviving buildings by Inigo Jones and the next wave of followers of Andrea Palladio in the eighteenth century.

Excellent hotels throughout in London, Bath and Norfolk.

West London – Chiswick, Richmond. Meet at the hotel in Richmond for lunch before a visit to Chiswick House, the finest and most influential instance of a Neo-Palladian villa, designed by Lord Burlington. A key work in the history of English architecture, this jewel-like edifice of the 1720s is situated amidst gardens of comparable historical importance, including the first glimmerings of the landscape style. First of two nights in Richmond.

West Wycombe, Marble Hill. Travel out of London to West Wycombe House in Buckinghamshire (admission out of public hours). Inspired by Palladio, it was constructed in two phases between 1740 and 1800 and has good contents and interiors. Free time for lunch before returning to Richmond for a visit to Marble Hill House (special arrangement). Built in the 1720s for George II’s mistress, the house is another perfect Palladian villa and overlooks the River Thames.

Richmond, Bath. Leave London for the South West of England. Prior Park, an exquisite 18th-century landscape garden housing its very own Palladian bridge, is a copy of one that stands in the grounds of Wilton House. Designed by Richard Jones in 1775, it was constructed in Bath stone and overlooks the idyllic lake in the grounds. Continue to Bath, for the first of two nights.

Bath, Stourhead. The morning is spent in Bath. The Circus, designed by the two John Woods (father and son), consists of a magnificent circle of row houses enriched with superimposed columns of the three Orders. By John Wood the Younger are the Assembly Rooms, with Ball Room and Tea Room, and Royal Crescent, perhaps the grandest street in England; No.1 is accessible and fully restored. Stourhead, though built in two phases, is the perfect classical villa, and the landscaped park of the 1740s is the most important of its kind – lake, temples, careful planting and contrived, if seemingly natural, vistas.

Basildon Park, London. Begun in 1776, Basildon Park in Berkshire was one of last great country houses to be built in the Palladian style. Wrecked in the earlier 20th century by neglect and military use, it was rescued and furnished and given to the National Trust. Continue to central London for the first of three nights at the Royal Horseguards Hotel near Whitehall.

Central London.The morning begins on the site of Whitehall Palace and the Banqueting House, designed by Inigo Jones and built 1619–21, the first true Classical building to be completed in the British Isles. There follows a walk to see some of the buildings around St James’s Park including Horse Guards, William Kent’s gateway to the royal palaces, St James’s Palace and Buckingham Palace (exteriors). Evening viewing at the Sir John Soane’s Museum (by arrangement). The museum is one of the most extraordinary in the world: adjacent town houses adapted by the eponymous architect and filled with his eclectic art collections.

Greenwich. Take a river cruiser on the Thames downstream to Greenwich, also site of a royal palace. Again, the sole survivor is by Inigo Jones – the Queen’s House, begun in 1616 but not finished till the 1630s, recently restored and now the picture gallery of the National Maritime Museum. A set of magnificent buildings by Wren, Hawksmoor and Vanburgh, Greenwich Hospital was built as a home for naval veterans.

Copped Hall, Houghton. There may be the opportunity to visit a Palladian mansion which is undergoing thorough restoration, and opportunity to see underneath the skin of an 18th-century building and learn something of practical conservation. Continue to Norfolk. The grandest monument of English Palladianism, Houghton Hall was built for Sir Robert Walpole by Colen Campbell, pioneer of the second wave of English Palladianism. Outstanding artworks, spectacular walled garden, extensive park. First of two nights in Burnham Market.

Holkham, Raynham. With William Kent’s Holkham Hall (1730s), the English country house reached a moment of perfection, the serene Palladian edifice contrasting with the ‘natural’ layout of the deer park. Within are magnificent classical halls and a collection of paintings, sculpture and furniture of staggering richness. One of the finest houses in Norfolk, Raynham Hall was begun in 1622 to a precociously Italianate design, and altered after 1725 by William Kent.

King’s Lynn, London. Drive to London via the historic town of King’s Lynn. Clifton House (by special arrangement) is a merchant’s house in the heart of the town that retains an amazing series of historic interiors dating from the 13th to the 18th centuries. Continue to London where the tour ends.

Please note that some of the visits are by special permission and the itinerary may be subject to change in light of this.

Travel by private coach; hotel accommodation as described below; breakfasts; 4 lunches and 6 dinners with wine, water, coffee; all admissions; all tips; all taxes; the services of the lecturer and tour manager.

Flights to and from the UK are not included in the price of the tour. If you live outside the UK, we ask that you make your own flight reservation and inform us of the details. Additional nights can be arranged before or after the tour at the hotel, on request.

Richmond Harbour Hotel: an elegant hotel in an eighteenth-century building atop Richmond Hill, Surrey. Apex Hotel, Bath: new luxury hotel located in the heart of Bath in Wiltshire, with leisure facilities and a pool. Royal Horseguards, London: 5-star hotel just off Whitehall and within walking distance of, or a short taxi ride to, most of the London palaces. The style is that of an international hotel. The Hoste Arms, Burnham Market: located in the attractive village of Burnham Market in north Norfolk, this hotel is housed in a former coaching inn and assorted outbuildings. Bedrooms have a largely traditional décor with contemporary twists and contain all mod cons. There is an excellent restaurant and a spa.

Unavoidably there is quite a lot of walking on this tour and it would not be suitable for anyone with difficulties with everyday walking and stair-climbing. Coaches can rarely park near the houses, many of the parks and gardens are extensive and some houses may not have lifts.

In partnership with the CPSA

This tour is designed in partnership with the Center for Palladian Studies in America (CPSA) with their members in mind. It is open for anyone to book. 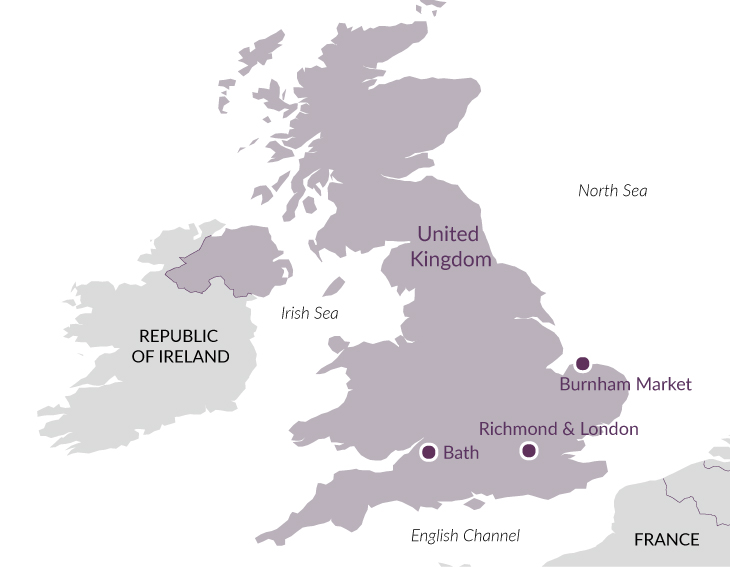