Art and architecture in the major cities and small towns which lie along the Roman road, the Via Emilia.

Based in the utterly charming ducal city of Parma and in the university city of Bologna.

Bound by the River Po to the north and the Apennines to the south, this wedge of Italy is replete with fascinating cities and great works of art, yet is still undeservedly neglected by cultural travellers. With probably not one hundredth of the visitors which Florence and Venice receive and many fewer than, say, Verona or Siena, one can view great architecture and world-class art works without the dispiriting intrusions of a large-scale tourist industry.

Across this undulating plain, one of the most fertile in Italy, the Romans founded a large number of prosperous towns and linked them by the Via Emilia which ran from Milan to the Adriatic coast. In the Middle Ages the region fragmented into a number of independent city states which, whether under a communal or despotic form of government, constructed mighty town halls, vast churches and splendid palaces, and caused great works of art to be created. At the beginning of the modern era, they were parcelled out between a motley collection of usually foreign and invariably unenlightened rulers, and they slumped into a torpor from which they did not recover until the Risorgimento.

Nevertheless, a succession of great artists continued to appear, particularly in sixteenth-century Parma and seventeenth-century Bologna, while the relative lack of prosperity resulted in the preservation of the city centres. One aspect of the allure of Bologna, one of the two bases for this tour, and other towns here is that they successfully reconcile the often incompatible features of economic well-being and ancient, unspoilt and enchantingly picturesque streetscape.

The cities now enjoy an envied reputation within Italy for quality of life and gastronomic excellence. Parma, one of the loveliest of the smaller cities in Italy, has been chosen as the other base for this tour.

Parma. Fly at c. 3.00pm from London Heathrow to Bologna, drive to Parma. First of five nights in Parma.

Parma. Parma is of great importance in particular for its High Renaissance school of painting. The cathedral and baptistery are outstanding for their Romanesque architecture and sculpture. See the astonishingly vital and illusionistic frescoes by Correggio in the cathedral, as well as the church of S. Giovanni and the exquisite Camera di S. Paolo. In the Palazzo della Pilotta is a good art collection and a rare Renaissance theatre.

Piacenza, Parma. Piacenza, which is on the border of Lombardy, has many medieval buildings on its Roman grid plan, among them an outstanding town hall and Romanesque cathedral. From the Renaissance there is the beautiful church of the Madonna di Campagna and the equestrian statue of Alessandro Farnese is a masterpiece of Baroque sculpture. Some free time in Parma.

Fontanellato, Sabbioneta. Fontanellato is a little town with an enchanting moated castle containing wonderful frescoes by Parmigianino. Sabbioneta was built as an ideal city on an almost miniature scale: a magical assembly of ducal palace, theatre, one of the world’s first picture galleries and all the appurtenances of a Renaissance ducal town.

Modena, Torrechiara. Modena, capital since the 16th century of the Este dukedom, has one of the finest Romanesque cathedrals in the region, with marvellous 12th-century sculpture by Wiligelmo. The Galleria Estense is particularly good for 16th- and 17th-century painting. The castle in Torrechiara has 15th-century frescoes. First of two nights in Bologna.

Bologna. Bologna is one of the most attractive of the larger cities in Italy, with Renaissance arcades flanking the streets. At its medieval heart are massive civic buildings and the vast Gothic church of S. Petronio, with sculpture by Jacopo della Quercia. The Pinacoteca Nazionale is one of Italy’s finest picture galleries (Raphael, Carracci family, Guido Reni). Finally, see the early medieval S. Stefano and S. Domenico, with the tomb of St Dominic

Flights (Euro Traveller) with British Airways (Airbus 319); travel by private coach throughout; hotel accommodation; breakfasts and 5 dinners with wine, water, coffee; all admissions; all tips; all taxes; the services of the lecturer.

Hotel Stendhal, Parma: quiet 4-star hotel, the best located in the middle of the historic centre, run by Mercure hotels. Hotel Corona d’Oro, Bologna: an elegant 4-star hotel in the heart of Bologna. Single rooms throughout are doubles for sole use.

There is a lot of walking on this tour, and it would not be suitable for anyone who has difficulties with everyday walking or stair-climbing. Average distance by coach per day: 50 miles. 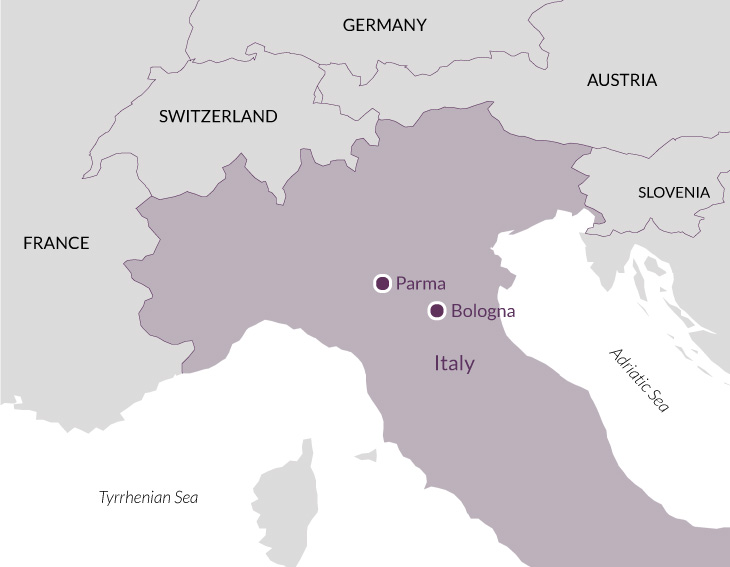