Piero della Francesca - A pilgrimage from Umbria to Milan

A journey to see nearly every surviving work in Italy by the Early Renaissance master.

Revised and extended itinerary, with more time in Milan and Florence.

This tour is an exhilarating study of one of the best-loved and most intriguing artists of the 15th century. It also takes you to a select handful of some of Italy’s loveliest places and best-stocked galleries, and through some of her most enchanting countryside.

Though the theme is a specialised one, the tour is by no means intended only for serious students of the subject. Few art lovers are untouched by the serenity and beauty of the high-key palette of Piero’s works; even fewer would be unmoved by seeing most of his surviving works in the towns and landscapes in which he created them.

Born about 1412 in the small town of Sansepolcro on the periphery of Florentine territory, Piero spent little of his life in the Tuscan capital to which most provincial artists flocked. Though he was not without influence, he had no ‘school’ or direct successors. A mathematician, his images beguile with their perfect perspective, architectonic form and monumentality.

There is little documentation for his life, and he seems to have been a slow worker. Few works survive, despite the fact that he lived until the age of 80.

Monterchi, Città di Castello. Fly at c. 7.45am (British Airways) from London Heathrow to Bologna. Drive to Monterchi to see Piero’s beautiful fresco The Madonna del Parto. Continue on to the hotel in Città di Castello for the first of three nights.

Perugia, Sansepolcro. Perugia, the capital of Umbria, is one of Italy’s most beautiful towns. The National Gallery of Umbria in the medieval town hall has a polyptych with The Annunciation by Piero. There is a wealth of other monuments, including a fine merchants’ hall with frescoes by Perugino. In the afternoon visit Borgo Sansepolcro, Piero’s birthplace and home town. Visit the museum in the former town hall, where Piero’s early masterpiece, Madonna della Misericordia, a panel of St Julian, and the marvellous Resurrection fresco are housed. Walk around the town centre, passing Piero’s house and the Romanesque Gothic cathedral.

Urbino. Drive through mountains to the hilltop town of Urbino. As one of the most enlightened and creative courts of the Renaissance, it has an importance in the history of art out of all proportion to its small size. Piero possibly contributed to the design of the beautiful Ducal Palace, which houses his exquisite Flagellation of Christ and the Madonna di Senigallia. Visit S. Bernardino, where Federigo da Montefeltro was buried.

Arezzo, Florence. See Piero’s great fresco cycle, The Legend of the True Cross, executed over a twenty year period, at S. Francesco, Arezzo. In the cathedral see his fresco of Mary Magdalene. Continue on to Florence where one night is spent. In the late afternoon visit the Uffizi, which contains portrait panels of Federigo da Montefeltro, Duke of Urbino, and his wife Battista Sforza.

Florence, Milan. In the morning, visit the Brancacci chapel with frescoes by Masaccio and Masolino. Travel by first class rail to Milan for the first of two nights.

Milan. The morning is free. Fly from Milan Linate to London Heathrow, arriving at c. 3.15pm.

Flights (Euro Traveller) with British Airways (Airbus 320); travel by private coach and first-class rail; hotel accommodation as described below; breakfasts; 1 lunch & 4 dinners with wine, water, coffee; all admissions; all tips; all taxes; the services of the lecturer and tour manager.

The tour involves a lot of walking in the town centres where vehicular access is restricted, and should not be attempted by anyone who has difficulty with everyday walking and stair-climbing. There is a lot of walking over unevenly paved ground. Fitness is essential. Some days involve a lot of driving. Average distance by coach per day: 62 miles.

We choose to travel by train from Florence to Milan because it is less harmful to the environment, quicker and more comfortable than travelling by coach. However, trains can be crowded and there is often little room for luggage, even on the Frecciarossa (high-speed train). And buffet cars can run out of food. You will need to be able to carry (wheel) your own luggage on and off the train and within stations. Some train stations do not have escalators or lifts and porters are not always readily available. 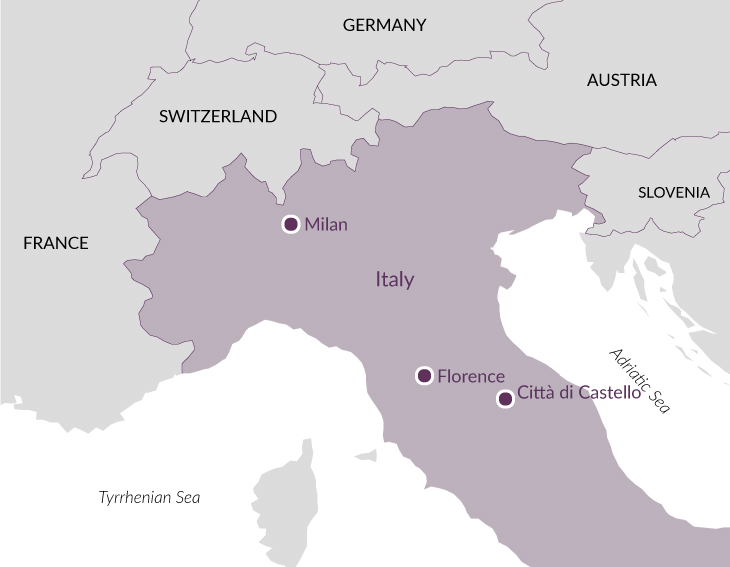 'To experience a high-end tour with everything taken care of in the company of an extremely knowledgeable lecturer, a very capable tour manager, and a group of congenial like-minded people was worth every penny.'

'Brilliant: I enjoyed everything! We saw a cornucopia of art and architecture travelling easily between small towns and large cities. Everything was well planned, and although the tour was intensive there was time for good meals and convivial conversation.'

'The itinerary provided an opportunity for us to travel to places that might otherwise be difficult to string together.'