First World War poetry in the context of the Battle of the Somme.

A presentation of the poetry through a study of events, landscapes and the wartime lives of individual poets. An actor reads the poems.

Blending history and poetry, this tour reveals the true landscape of war: locations, topography, events, but also hope, fear, anger, pain and love, all viscerally manifest in the poetry of the First World War.

The opening day of the Battle of the Somme, 1st July 1916, is taken as the starting point for the tour, with an exploration of the front line area and a study of the events of that day and subsequent weeks. A sprinkling of poetry from 1914 and 1915 adds to the modern contextual understanding of the enormous sense of loss. During 1917 and 1918, other war poets became embroiled in later battles and their poetry will be placed into context on ‘the old 1916 battlefield’. This leads on to a wider examination of the nature of trench warfare and of the course of the war as a whole. Much has survived: trenches, shell holes and mine craters. The tangible remains of warfare and the pattern of cemeteries are now woven into the fabric of the modern landscape.

What sets this tour apart is the parallel exploration of the lives of those regular soldiers, volunteers and civilians who bequeathed to us the most emotionally potent body of poetry in English literature. This is not an exercise in literary analysis, however, but poems are placed in the context of the battlefield and of the lives (and deaths) of the many and varied individuals who wrote them.

The tour is very much ‘in the field’ with a series of short walks on each day, averaging from a few hundred metres to a maximum distance of 1.5 miles, and set to follow the events on particular sections of the front line. The fourteen miles of front line are neatly divided by the Roman road from Albert to Bapaume.

Pozières, Agny. Travel by coach at 9.00am from central London to Folkestone for the 35-minute Eurotunnel crossing. Continue by coach, arriving in the field mid-afternoon. Drive the length of the front line for an initial orientation of the Somme battlefield, identifying the exact positions of the opposing trenches. The lecturer gives an introduction at the windmill site at Pozières, the highest part of the battlefield. Visit Agny Military Cemetery for poetry by Edward Thomas and Eleanor Farjeon. Continue to the hotel in Arras.

Beaumont Hamel, Mesnil, Thiepval. Explore to the north of the Albert to Bapaume Road. Start at Beaumont Hamel and visit Newfoundland Park for an introduction to the trenches through the poetry of Richard Aldington, Robert Graves and John Edgell Rickwood. Move along the line through Auchonvillers, along the Ancre Valley, with Edmund Blunden, Wilfred Owen and A. P. Herbert. At Thiepval is the Memorial to the Missing, the most monumental of the many Great War memorials, which bears over 72,000 names. Today’s poems include A Soldier’s Funeral by John William Streets, Dulce et Decorum est by Wilfred Owen, Binyon’s For the Fallen and, at Thiepval, Charles Sorley’s When you see the millions of the mouthless dead / Across your dreams in pale battalions go.

Longueval, Mametz, Ors. Start in the area south of the Albert to Bapaume Road where some battalions were more successful and gained their objectives on the first day, before the arduous struggle of attrition moved into the ‘Horseshoe of Woods’. The site of Siegfried Sassoon’s HQ dugout is near the village of Fricourt, ‘while time ticks blank and busy on their wrists’. At Mametz, on William Noel Hodgson’s ‘familiar hill’, read Before Action: ‘Must say goodbye to all of this / By all delights that I shall miss, / Help me to die, O Lord.’ In 2018 only, visit Ors to follow the attack route of Wilfred Owen and the 2nd Manchesters along the canal, and visit Owen’s grave.

Contay, Louvencourt, La Boisselle. Stray behind the lines, visiting areas associated with the Casualty Clearing Stations. Louvencourt for Vera Brittain and Roland Leighton, and Contay as an appropriate location for the choice of women’s poetry, May Wedderburn Cannan and Margaret Postgate Cole. At La Boisselle, astride the Roman road, follow the fortunes of two battalions of the 34th Division. The poetry of Wilfred Owen, Edward Thomas and Alan Seeger features (I have a rendezvous with death). Final lunch before driving to Calais for the Eurotunnel journey home, arriving in central London at c. 7.30pm.

Eurotunnel crossings are subject to confirmation a few months in advance. If we are unable to secure a space on our preferred crossings, we may need to take a ferry between Dover and Calais instead.

Luxury coach travel from London and within France; channel crossings with P&O Ferries or Eurotunnel; accommodation as described below; all meals with wine, water and coffee; all admissions; all tips; all taxes; the services of the lecturer and the poetry reader.

Hôtel de l’Univers, Arras: traditional 4-star hotel in Arras, installed in a 17th-century building, with a good restaurant. Single rooms are doubles for sole use.

There is quite a lot of standing around and walking on this tour, most of it over rough ground. Some days involve a lot of driving. Average distance by coach per day: 143 miles. 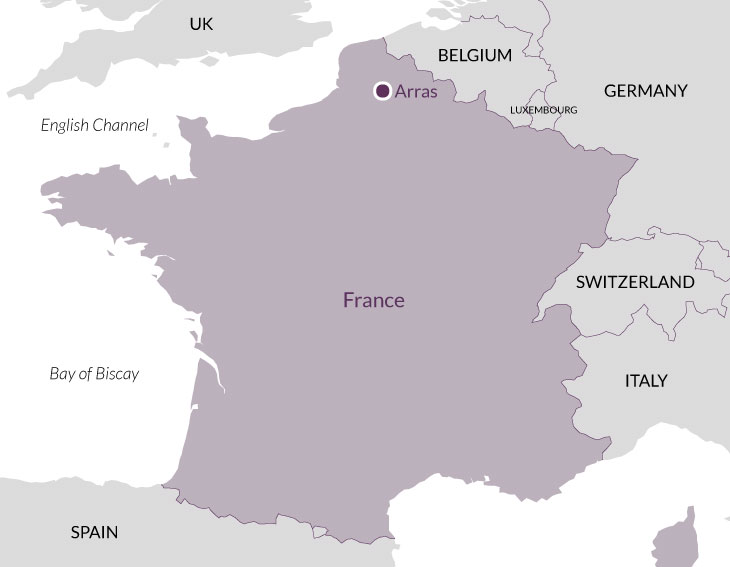 'Very impressive. Obviously a great deal of thought and preparation had gone into it.'

'It was most effective. The lecturer knows his subject thoroughly and really brings it to life. Brilliant.'

'Our lecturer was marvellous and had an encyclopaedic knowledge of the subject.'

'Thank you for a very special few days. I can’t recommend this tour highly enough.'

'Just a sincere thanks for a memorable experience. Something I have wanted to do for many years and it well and truly lived up to my expectations.'