Provence at Christmas - The essence of Mediterranean France

Stays in two highly attractive city centres and encompasses a range of the best that Provence has to offer in the way of art and architecture.

Paintings from medieval to Cézanne and Picasso, and outstanding medieval sculpture.

In Avignon a 5-star hotel in a historic building, and 2 nights in Marseille beside the old port.

Famed for its natural beauty, its wealth of Augustan and second-century monuments, and the quality and ambition of its medieval heritage, Provence can seem the very essence of Mediterranean France. The Roman and medieval settlements were sparsely distributed, and the major historic centres are clustered within the valleys of the Durance and Rhône.

The range and quantity of Roman work, surviving particularly at Orange and St-Rémy, is impressive – and impressed their medieval successors. The pre-eminent Romanesque churches of Provence are notable both for a predilection for sheer wall surfaces and an indebtedness to earlier architectural norms.

But it is above all the sculpture which was susceptible to this sort of historicising impulse. The Romanesque sculpture of Provence is more skilfully and self-consciously antique than any outside central Italy, and is often organised in a manner designed to evoke ancient sarcophagi or theatres and triumphal arches.

The Italian connection was strengthened when, for much of the 14th century, the papacy came to reside in Avignon, one of the loveliest cities in France. The complete circuit of walls is an impressive survival from this time, as is the Palais des Papes, the finest palace to have survived from the Middle Ages.

Time is spent in Aix, the attractive old capital of Provence and birthplace of Cézanne, and the new capital, Marseille, handsome and vibrant and at times gritty. Oscillating between small provincial town and big city, Marseille was propelled into the 21st century by Norman Foster, Frank Gehry and Zaha Hadid all of whom contributed to the civic improvements and architecturally striking new museums for its year as European Capital of Culture in 2013.

Avignon. Fly at c. 2.30pm (British Airways) from London Heathrow to Marseille. Drive to Avignon, where five nights are spent.

Avignon. A day in one of the loveliest cities in France – medieval wall, ancien régime mansions, numerous churches and riverside vistas. The collections of Gothic sculpture and painting in the Petit Palais act as a splendid foil to the work at the papal palace, while the cathedral houses the magnificent tomb of Pope John XXII. In the afternoon visit the Musée Calvet, the city’s main museum of fine arts, housed in an 18th-century hôtel particulier.

Villeneuve, Orange, Pont-du-Gard. A day spent mostly within sight of the Rhône, beginning with Pope Innocent VI’s now ruined but still very impressive Charterhouse at Villeneuve-lez-Avignon. The day’s real star is Orange, location of the greatest of all Roman theatres to survive in the West. Also view that astonishing feat of engineering the Pont-du-Gard that brought water over the River Gardon.

Aix-en-Provence. At Aix, another exceedingly pretty and elegant city, the cathedral displays an extraordinary juxtaposition of Merovingian baptistery, Romanesque cloister, 13th-century chancel and late medieval west front. Cézanne’s studio remains as he left it on his death in 1906, and a short drive away are fine views of Mont Sainte-Victoire, the most recognisable motif in modern art.

Avignon. For most of the 14th century the papacy was based in Avignon, in voluntary exile from the factionalism and violence of Rome. The Palais des Papes is the principal monument of this remarkable period, by far the most significant 14th-century building in southern France and the greatest surviving medieval palace complex in Europe. Some free time in Avignon before a lecture and Christmas dinner.

St-Rémy-de-Provence, Marseille. Drive along the northern flank of the Alpilles to St-Rémy-de-Provence, Glanum of old, site of one of the truly great funerary memorials of the Roman world, the cenotaph erected by three Julii brothers. There is a moving visit to the former monastery where Van Gogh was hospitalised; Romanesque cloister, scenes he painted and his own room. Continue to Marseille and visit the Basilique St Victor, which has a 5th-cent. crypt. First of two nights in Marseille.

Marseille. Still one of the busiest ports in the Mediterranean, Marseille is a vibrant place whose historic centre has been much upgraded recently. Walk through the Vieux Port district, seeing remains of the city’s ancient Greek port. The lively Musée d’Histoire de Marseille offers historic context while the Musée Cantini has a collection of classic modern art from the first half of the 20th century; Dufy, Ernst, Miró, Picasso, Léger.

Flights (Euro Traveller) with British Airways (aircraft: Airbus A319); travel by private coach throughout; hotel accommodation as described below; breakfasts and five dinners with wine, water and coffee; all admissions; all tips; all taxes; the services of the lecturer and tour manager; hire of radio guides for better audibility of the lecturer.

Quite a lot of walking is involved, particularly in the town centres. The tour is not suitable for anyone who has difficulties with everyday walking and stairclimbing. Average distance by coach per day: 39 miles. 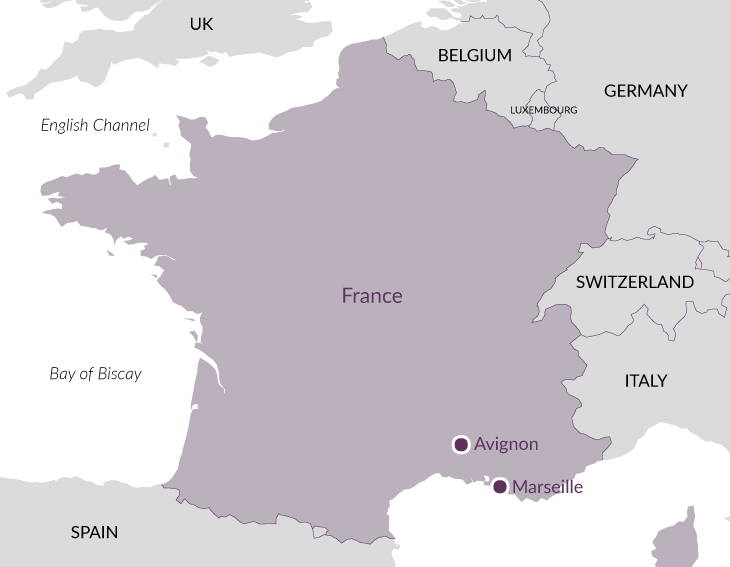 'We liked the mix of art, history, and culture along with the seasonal time of year.'

'Alexandra was knowledgeable and charming.'

'Provence is a brilliant place to be at Christmas!'