Norway and Sweden are home to some of the most spectacular rock art panels in Europe.

Begin at Alta, above the Arctic Circle, a UNESCO site with over 6,000 carvings; an area of outstanding natural beauty.

Journey south to Tanum, a remarkable collection of carvings and prehistoric graves, with further fine sites nearby.

Also included is the world-class Viking Ship Museum in Oslo alongside some extraordinary archives and site-related museums.

A tour with a backdrop of open skies and midnight sun led by the UK’s foremost specialist in prehistoric art.

Some regions of Scandinavia – especially parts of Norway and Sweden – are remarkably rich in spectacular prehistoric rock art. Hundreds of rock carvings featuring ships, human beings with weapons, as well as animals such as reindeer, elk and bears can be seen, and some of the best have been coloured red in recent times, to make them easier to see and understand.

Some of the world’s earliest studies of rock art took place in Scandinavia, extending as far back as the 17th century and featuring some remarkable pioneering scholars. A great deal of research continues on this corpus, which continues to grow – the striking rock art of Norway’s Alta region, included on UNESCO’s World Heritage list, was only discovered in 1973. The thousands of petroglyphs at Alta are above the Arctic Circle and while their precise age is unknown, from their position in relation to the shore line, they are thought to date to between 4200 and 500 BC.

In Bohuslän, southern Sweden, there are more than a thousand petroglyphs of boats, thought to date mostly to the Bronze Age, about 3000 years ago. These ubiquitous images were once interpreted as Viking battleships, but later came to be seen as cult ships linked to a fertility god. Are they real ships, symbolic ships or both? Do they represent trade and travel? Were they perhaps carved to ensure safe and fruitful voyages? Or were they symbols of the voyages of the dead?

London to Alta. Fly at c. 10.15am from London Heathrow via Oslo to Alta (Scandinavian Airlines). Arrive at the hotel in time for dinner. First of two nights in Alta.

Alta. Home to the most extensive concentration of rock art created by hunter-gatherers in Northern Europe, Alta has over over 6,000 carvings, and over 3,000 of them are in the area immediately around the World Heritage Rock Art Centre. The Hjemmeluft panel carvings, the oldest of which are over 7,000 years old, depict human activities and rituals, myths, legends and a great variety of animals, all closely linked with the surrounding landscape. In the afternoon, an opportunity to visit the Northern Lights Cathedral (2013) before driving to Sorrisniva for a boat trip along the Alta river.

Alta to Oslo. In the morning explore documentation of UNESCO-listed carvings and paintings discovered at Kåfjord, Transfarelv, Storsteinen and Amtmannsne, as well as the unlisted finds at Isnestoften, including the ‘Pippi stone;’ the first carved rock found in Alta, and a larger discovery unearthed nearby on Langnesholmen along with remains of Late Stone Age, Early Bronze and Iron Age dwellings. Both loose rocks are now exhibited at the Alta Museum. In the afternoon fly to Oslo (Scandinavian Airlines), arriving at the hotel in time for dinner. First of two nights in Oslo.

Oslo. There is an opportunity to compare the prehistoric carved boats at Alta with those of the Vikings in Oslo’s magnificent ship museum on Bygdøy (Museum Island). Continue to the Kon-Tiki Museum, housing vessels and maps from the 1947 expedition. The afternoon is free to discover the city’s museums, galleries and architecture.

Oslo, Østfold, Tanum. Drive from Oslo to Østfold where Bronze Age rock art, cairns, Iron Age stone circles and burial sites form an ancient trail of heritage sites. At Solberg a 28-metre tower affords views of the fertile landscape, and nearby two rock faces display carved ships. Continue to Hornes, where 22 ships are carved into granite, and the nine stone circles at Hunn. Stop for lunch in the attractive town of Frederikstad with a well preserved old town. In the afternoon visit the carved motifs at Begby and the impressive Bjørnstad ship, the largest single rock carving in Northern Europe, before driving to Tanum, Sweden, where the final three nights are spent.

Tanum. Tanum was awarded World Heritage status in 1994 and as well as its concentrated rock art sites, the great number of prehistoric graves demonstrates that the area was heavily populated in the Bronze Age. In the morning visit the Vitlycke Museum and the nearby panel depicting ‘The Bridal Couple’ representing sacred marriage and a rare blue whale motif. In the afternoon drive to Aspeberget, an expansive site which has survived the ravages of nature for over 3,000 years with remarkable sun symbols. Continue to Litsleby, a panel dominated by the spear-god; the largest carved figure in Scandinavia. After dinner explore more of Tanum’s rock carvings by night, under torchlight.

Tanum. In the morning walk a 5.5km route along farm roads and cattle trails, taking in a landscape shaped by human activity since the Bronze Age and passing several petroglyphs. Drive to Grebbestad for lunch, a coastal resort where 90% of Sweden’s oysters are harvested. In the afternoon, visit the Underslös Museum, an international centre for rock art documentation with an impressive archive, presented by the curator. Continue to the nearby site of Fossum, where figures wielding ceremonial weapons and rituals are depicted.

Tanum to Oslo. Drive north to Oslo, arriving at the airport with time for lunch. Fly to London Heathrow, arriving at c. 4.30pm.

Flights with Scandinavian Airlines (economy class, Airbus A320, Boeing 737); day 1 from London to Alta (via Oslo), day 8 from Oslo to London; and flight with Scandinavian Airlines (economy class, Boeing 737) day 3 from Alta to Oslo; travel by private coach throughout; boat trip; hotel accommodation as described below; breakfasts, two lunches and five dinners with a glass or two of wine, water and coffee; all admissions; all tips; all taxes; the services of the lecturer and tour manager.

The domestic flight with Scandinavian Airlines (economy class, Boeing 737) from Alta to Oslo on day 3 is included in the tour price for all participants.

A lot of walking is involved to reach the carvings and panels, often over rough ground or up steep gradients. The ground around the sites is slippery underfoot; sure-footedness is essential. In Alta the sun does not set in June so daylight is constant, and in Oslo and Tanum there are only a few hours of darkness. We advise you bring an eye mask. There is a long coach journey on the final day but five days with minimal driving. Average distance by coach per day: 46 miles. 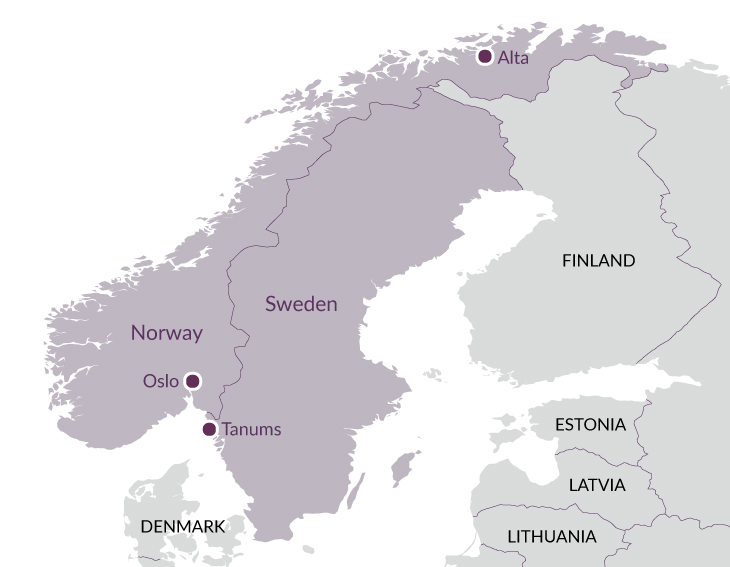