Beautiful Mediterranean cities with extensive Roman remains, including the earliest outside Italy.

Study the wars between Rome and Carthage: Hannibal and the Scipios. Learn of the Romans and Visigoths; pagans and Christians.

The lecturer is Professor Simon Esmonde Cleary, Professor of Roman Archaeology at the University of Birmingham.

In the ancient world, the Mediterranean coast of Spain was always a prized possession. But it wasn’t until it was absorbed into the Roman Empire that its economic potential was fully exploited. This was a place of mass production, dazzling wealth and, at times, brutal working conditions. In the mines, armies of slaves dug for lead, silver, copper and iron. Both land and sea were exploited for the production of grain, the vine, olive oil and fish sauce.

Given the scale of Hispania’s resources, it’s no wonder Roman civilisation flourished here – and the material remains are both impressive and thickly-strewn. Ingenious engineering projects, grand public monuments and unbridled displays of private wealth are all to be seen: and it’s this inheritance that provides the backbone of our tour.

Three of Hispania’s key cities are on the itinerary: Carthago Nova (modern Cartagena), Saguntum (Sagunto) and Tarraco (Tarragona). At Tarragona, for example, you can trace the circuit of walls built by Gnaeus and Publius Scipio in 218 BC, when they arrived in Spain to threaten Hannibal’s base in the Second Punic War. It’s now the oldest surviving Roman monument outside Italy. Here too is the hilltop circus (seating capacity, 25,000), which embellished the city when it was a provincial capital – as well as the amphitheatre where the Christian bishop Fructuosus was martyred in 259 AD.

We also visit Barcino (Barcelona) – the setting, in 416 AD, of the marriage of the Visigothic king Athaulf to Galla Placidia, sister of the emperor Honorius. It was a deeply symbolic moment, as the western Empire began to fracture into competing “barbarian” kingdoms.

Together the region’s monuments and museums make a fascinating ensemble, and provide the backdrop for many dramatic stories: of the titanic struggle between Rome and Carthage; of Publius Scipio’s brilliant victory at Ilipa; of the rise of Christianity; of the strange death of the Western Empire in the fifth century ad. In many respects, the entire trajectory of Rome’s imperial history can be followed here, from triumph to collapse. Add in the region’s vibrant modern culture – and its mouth-watering cuisine – and you’ve got the makings of a memorable tour.

Fly at c. 4.00pm from London Gatwick to Alicante (British Airways). Drive to Cartagena for the first of two nights, arriving at c. 10.00pm.

Cartagena. Visit the hilltop sites of the Punic and Roman city, starting with the restored Roman theatre and its accompanying museum, designed by Rafael Moneo, before continuing to the Casa de la Fortuna, an aristocratic residence with beautiful murals and mosaics. In the area of the Roman forum the earlier remains of Carthaginian walls are one of the few Punic monuments in the Iberian peninsula, while excavations of the Roman forum revealed streets, a bath-house and a courtyard building, possibly religious.

Cartagena, Valencia. The Museum of Subaquatic Archaeology explores the maritime history of the Mediterranean and includes a replica of a Phoenician trading ship. The city’s Archaeological Museum has a rich collection of Carthaginian and Roman artefacts. Drive in the afternoon to Valencia (c. 4 hours including a stop). Overnight in Valencia.

Sagunto, Tarragona. Morning visit to the site of Saguntum, including the restored Roman theatre. The castle, essentially Moorish, still preserves parts of the Roman forum, while the Archaeological Museum contains one of the most important collections of Latin inscriptions in Spain and distinctive mosaics from the Late Roman Empire. Drive in the afternoon to Tarragona (c. 3 hours including a stop). On arrival, walk a section of the early Roman walls. First of three nights in Tarragona.

Tarragona. The Roman circus for c. 25,000 spectators formed part of a massive monumental complex on the hilltop dating to the late 1st century ad, part of which forms the basis for the medieval ‘Pretorio’. The city’s National Museum of Archaeology houses an excellent collection of mosaics, wall paintings and sculpture. Occupying an impressive site by the Mediterranean, the well-preserved Roman amphitheatre includes the remains of two churches dating to the 6th and 12th centuries. There is some free time to visit the cathedral, built on the site of the major Roman temple atop the hill.

Around Tarragona. Visit the Colonial Forum, civic centre of Tarragona, then the Early Christian Museum and Necropolis featuring a splendid series of carved marble sarcophagi. Outside the city, the two-tier aqueduct named Pont del Diable is a feat of Roman engineering, delivering water to Tarragona. The exceptional remains of 4th-century mosaics can be seen on the dome of the Roman Villa of Centcelles.

Barcelona. Drive to Barcelona via the funerary monument of the ‘Tower of the Scipios’, and the honorific Arch of Bera, dedicated to the Emperor Augustus. The Museum of History of Barcelona contains part of Roman Barcino with its streets, sewers, laundries and wine- and fish-sauce-making factories. Walk around the Gothic quarter where the remnants of Roman walls, tombs and temples can still be seen. Fly from Barcelona to London Heathrow (British Airways), landing
at c. 7.30pm.

Flights (Euro Traveller) with British Airways (Airbus 320); travel by private coach; hotel accommodation as described below; breakfasts, 1 lunch and 4 dinners, with water, wine, coffee; all admissions; all tips; all taxes; the services of the lecturer and tour manager.

The tour involves a lot of walking on archaeological sites. Uneven ground, irregular paving, steps and hills are standard. A good level of fitness is essential. You will be on your feet for lengthy stretches of time. There are some long coach journeys. Average distance by coach per day: 72 miles. 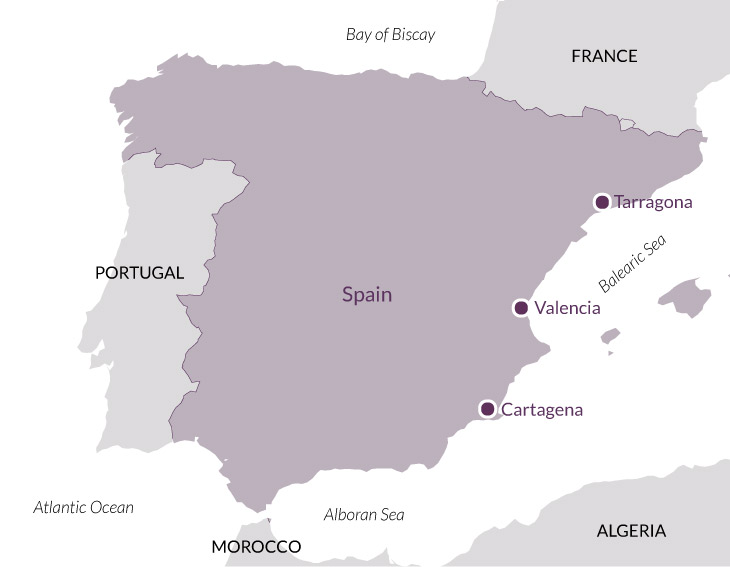