Includes the best of the island’s material culture, from Neolithic and Bronze Age, through Punic and Roman to mediaeval and Renaissance.

The unique Bronze Age nuraghi are a striking feature, as are Tuscan-style Romanesque churches and 16th-century Catalan altarpieces.

Wonderful mix of sites from the south to the north following the west coast of the island.

Despite being the second largest island in the Mediterranean, Sardinia’s cultural treasures remain largely undiscovered by travellers. Its extraordinary jagged coastline and clear blue seas have earned it a deserved reputation for beach tourism, with villas and resorts clinging to the cliffs along the Costa Smeralda. Yet the wealth of prehistoric sites, Punic and Roman remains and Pisan-Romanesque churches make it a fascinating destination for those prepared to forego the luxury of the coast and explore inland.

As with all the larger islands in the Mediterranean, Sardinia was plundered and settled by a succession of pirates and empire builders. However, due in large part to its rugged and impenetrable landscape, Sardinian identity was never wholly extinguished. Her Bronze Age settlements truly set it apart. Deep gorges, craggy limestone and slate mountain ranges and swathes of verdant countryside hide over 7000 nuraghi, peculiar conical stone structures which were forts, palaces and simple domestic dwellings. Much is left to the imagination as little is known about these edifices, though digs are leading to some fascinating insights.

Evidence of Phoenician power on the island can be seen at Tharros on the west coast, established in the eighth century BC in a strategic position jutting into the sea in the Gulf of Oristano. Later colonized by the Romans, the site is a remarkable example of a coastal city-state. Finds can be seen in Sardinia’s superlative collection of archeological museums, in Cagliari, Sassari and Oristano.

The decline of the Roman Empire left Sardinia open to Goths, Lombards, for a short spell the Byzantines, and to the new Muslim empires of North Africa and Spain. The Pisans and Genoese in the eleventh century left an indelible mark on the island with their superb Romanesque churches in the Logudoro region, indeed some of the finest in Europe.

Rule by the Kingdom of Aragón brought a Spanish dimension to the island’s culture, most evident today in the Catalan-Gothic architecture of the fishing port at Alghero and, concealed in mediaeval churches in tiny villages the length of the island, sumptuous sixteenth-century retables which rival coeval ones on the Italian mainland.

Fly at c. 12.00 midday (Alitalia) from London City Airport to Cagliari, via Milan. First of three nights in Cagliari.

Cagliari. The morning is spent in the Cittadella dei Musei: the art gallery has works by the foremost Sardinian retable painter, Pietro Cavaro, and the excellent archaeological museum has important finds from the Nuragic, Phoenician and Roman periods. See the Giganti di Mont’e Prama, nuragic stone figures representing warriors, boxers and archers that have been recently reconstructed from over 5,000 fragments excavated in the 1970s. In the afternoon walk up the Bastione St. Remy, an immense late 19th-century gateway to the Castello district. The cathedral has a remodelled Pisan-Romanesque façade and a sculpted pulpit from 1160. The Museo Diocesano has a 15th-century Flemish triptych.

Barumini, Tuili. The Nuraghe Su’ Nuraxi is the largest of the Bronze Age nuraghi, with an impressive central tower constructed of basalt. At nearby Tuili, the unprepossessing Chiesa di San Pietro houses an exquisite retable by the Maestro di Castelsardo (c. 1500). Return to Cagliari for a little free time. Stroll around the mediaeval ramparts or visit the several Baroque churches.

Paulilatino, Oristano. The Basilica di Santa Giusta, erected in 1135, is one of the earliest of the Tuscan Romanesque churches. The Nuraghe Santa Cristina is the most picturesque nuragic site, surrounded by olive groves and with an astounding underground shrine from the second century bc. At Oristano there is a fine collection at the archaeological museum, a 14th-century polychrome statue by Nino Pisano in the cathedral. First of two nights in Oristano.

Tharros, San Salvatore. Tharros is a magnificently located Punic and Roman site, with fine views over the Gulf of Oristano. The nearby Byzantine Church of San Giovanni in Sinis is the oldest of Sardinia’s churches. Visit the Church of the Saviour, which has an underground hypogeum with 4th-century frescoes depicting animals and Roman mythology. Return through the marshes of the lagoon, stopping for lunch at a fish restaurant in the town of Cabras.

Borruta, Bonorva, Torralba. San Pietro di Sorres is the most superbly situated Romanesque church in Sardinia, with typical Tuscan black and white stone banding. The church overlooks the Valle dei Nuraghi where there is a concentration of nuragic sites. Visit Nuraghe Santu Antine, the most complex nuragic site in Sardinia. The cliff necropolis of Sant’Andrea Priu was used for burial in the 2nd and 3rd centuries bc. In the main chamber are exquisite fragments of later Roman and Byzantine frescoes. Continue to Sassari for the first of three nights.

Sassari, Porto Torres. The morning is spent in Sassari, which has a network of charming mediaeval streets culminating in stately 19th-century piazze. The cathedral of San Nicola has one of Italy’s most lavish Baroque façades. There is a large collection of pre-historic, Punic and Roman artefacts in the Museo Sanna, as well as excellent models of the nuraghi and tomb complexes. At Porto Torres, the Basilica di San Gavino is a monumental Romanesque structure, Sardinia’s earliest and finest, with almost thirty Roman columns flanking the nave. The Copper Age sanctuary of Monte D’Accoddi is entirely unique in the Mediterranean, reminiscent of the tombs of the Aztecs.

Alghero, Churches of the Logudoro. Alghero is a picturesque seaside town, still functioning as a commercial fishing port. A Catalan colony for nearly 400 years, the Spanish influence can be seen in the Catalan-Gothic architecture of the old town. Visit the nearby Domus de Janas site Anghelu Ruju, a fine example of the pre-nuragic hypogea found all over the island. Drive to see two examples of Pisan-Romanesque churches, each in a very different setting in the rural landscape. Santissima Trinità di Saccargia is a splendid example, built in black basalt and white limestone in 1116. Santa Maria del Regno has a magnificent ornate retable from 1515.

Flights (Economy) with Alitalia (Airbus 320, Embraer 90); travel by private coach for airport transfers and excursions; hotel accommodation; breakfasts, 4 lunches (including 1 picnic) & 5 dinners with wine, water, coffee; all admissions; all tips; all taxes; the services of the lecturer.

Hotel Regina Margherita, Cagliari: a refurbished 4-star hotel, externally unattractive but internally clean and bright, with spacious rooms. Mariano IV Palace Hotel, Oristano: the only centrally located 4-star hotel in the town, in need of refurbishment. Bedrooms are a good size if a little dated. Hotel Leonardo da Vinci, Sassari: 3-star hotel close to the historic centre but rooms are simple, small and ill-lit. These hotels are the best in their localities, but are by no means luxurious or indeed memorable.

The flights offered on this tour are indirect via Milan as at the time of going to press there are no airlines other than Easyjet and Ryanair that offer direct flights from London to Sardinia on the days this tour runs. Low-cost airlines do not offer viable booking conditions for tour operators arranging group travel. However, participants who prefer to arrange their travel independently and fly directly can do so.

A lot of walking, some over rough ground at archaeological sites or over cobbled or uneven paving. Fitness and sure-footedness are essential, particularly for clambering up nuraghi. Some days involve a lot of driving. Average distance by coach per day: 75 miles 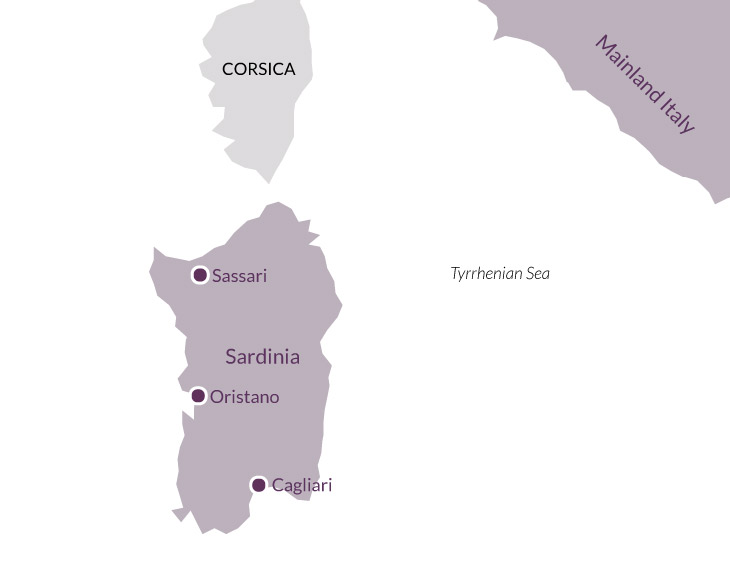 'The choice of itinerary was good – we saw some impressive ruins and some good early art in the Romanesque Churches.'

'I will recommend this holiday to friends I know have relevant interests. Many thanks to MRT for giving us such a wonderful holiday.'

'The choice of itinerary was excellent. The Nuraghi tombs were well worth seeing and the visit to the Restoration centre outside Sassari on the last day gave a brilliant conclusion to that concept.'

'The choice of itinerary was well planned and an excellent balance of archaeological sites.'