Studies the social history, industrial  archaeology, architecture and art of the reign of Queen Victoria, a period when Great Britain led the world in trade, industry and ideas.

Includes some of the most beautiful architecture of the era and immensely impressive works of engineering – canals, railways, bridges.

Painting and sculpture in all its manifold variety features; many of the country’s best collections of Victorian art are in the region.

The historical, social and economic context is an important strand of the tour, with attention to the lives of some of the greatest Victorians.

A subsidiary theme is the remarkable post-industrial regeneration of recent years.

Athens, Florence, Manchester: there is no fourth. Another risible Victorian polemic? No. The essence of this proposition concerning the paramount importance of Manchester in the history of civilisation remains valid. The impact of the industrial cities of Victorian Britain in shaping the modern world cannot be overestimated.

But the era still needs rescuing from twentieth-century disdain. Ignorance and misunderstanding remain deep and widespread. The truth is that nineteenth-century Britain was one of the most dynamic and innovative societies in history, and that Victorian cities, as the principal material manifestation of that great age – and their post-industrial reincarnation – are among the most fascinating features of the United Kingdom.

In the earlier decades of the century Britain led the world in industrialisation and technology, dominated world trade and became the world’s wealthiest nation. It can also be claimed that Britain was a leader in the development of ideas, the extension of education, the practice of philanthropy and social amelioration and the advance (if haltingly) of political reform. Meanwhile the British Empire grew and grew, almost by accident, and became the most extensive the world has ever seen, and the best administered.

London might have been the world’s biggest city and the seat of government of the Empire, but the crucible of progress did not lie beside the Thames. The great inventors were mainly from the north, railways were at first a northern phenomenon and the north was the source of many of the great ideas of the age, free trade among them. The arts, too, particularly architecture, were less Londoncentric than they became subsequently; a very large proportion of the great buildings of Victorian England are in the northern counties. (Liverpool has more listed buildings than any city outside London.)

For variety, vigour, muscularity, ambition, technological boldness, ingenuity, symbolism and, yes, beauty, Victorian architecture has few peers in all history. Much of the interest of this tour lies in the built environment: palatial town halls, Pirenesian warehouses, fabulously embellished churches, noble Philosophical Institutes, mansions for the rich and tenements for the poor. But of no less interest are the stunningly impressive engineering accomplishments – canals, railways, bridges – whether their aesthetic power arises from raw functionalism or historicist adornment.

Victorian painting and sculpture is an important part of the tour; a good proportion of the country’s finest collections are in the North West. The best is world-class, the Pre-Raphaelites in particular, but irrespective of artistic merit the art is fascinating for what it reveals of Victorian attitudes and mores as well as for what it purports to depict.

A week’s holiday in Manchester, Leeds and Liverpool is an unusual proposition, and this itinerary is probably unique. We might not have risked it ten years ago but recent regeneration has reversed decline and dramatically assisted the transformation to the post-industrial era. As a trio of cities to visit they should be considered to rank with, say, Bologna, Parma and Verona, or Augsburg, Nuremberg and Regensburg: there is as much of artistic and architectural interest to see, and arguably the historical significance is greater.

Manchester. Assemble at the Midland Hotel in Manchester and leave at 2.15pm for a walk to see many of the great Victorian buildings which still predominate in the city centre. The City Art Gallery has a superb collection of Victorian paintings, particularly Pre-Raphaelites. First of two nights in Manchester.

Manchester. The industrial landscape of Castlefield encompasses the world’s first passenger railway station (1830), the nodal point of England’s most important canal network and other monuments of the industrial revolution. A palatial manifestation of municipal pride, Alfred Waterhouse’s Town Hall (1867–77) is one of the most splendid buildings of the era. An afternoon by coach includes the soaring beauty of Bodley’s St Augustine at Pendlebury.

Manchester, Saltaire, Leeds. The John Rylands Library (Basil Champneys) is late Victorian architecture at its most refined. In 1853 Titus Salt consolidated his five cloth factories into one, added a model town and named it Saltaire. It survives intact, a monument to Victorian ameliorism and to 21st-century regeneration. Arriving in Leeds, visit the stupendous Classical Town Hall (Cuthbert Broderick 1853) and the Corn Exchange (also Broderick), a masterpiece of Victorian commercial architecture. First of two nights in Leeds.

Leeds, Bradford. The industrial heritage of Leeds: a vast 1840s mill, an Egyptian-style mill and factory chimneys imitating medieval Italian towers. The retail and commercial district is the most extensive and unspoilt area of Victoriana in Britain, with dazzlingly elaborate arcades and endlessly inventive façades. An afternoon in Bradford (20 minutes by train), source in the 1850s of two-thirds of Britain’s woollen cloth. Retaining a medieval street pattern on a sloping site, the centre has a magnificent set of Gothic Revival buildings.

Leeds, Liverpool. Among the sights today are the 1830s Parish Church, a key monument in the history of the Gothic Revival, an amazing Venetian Gothic warehouse disrupting the Georgian serenity of Park Square and the Municipal Buildings complex with the Art Gallery, Library and Tiled Hall. By coach from Leeds to Liverpool. First of three nights in Liverpool.

Liverpool. The Albert Dock (1843) is among the most impressive constructions of the century, ruggedly functional but perfectly proportioned. Time for exploration, lunch and a museum or two (Tate Liverpool is here). See other waterside buildings, including the enormous Tobacco Warehouse. To the salubrious suburb of Sefton Park and two fine late Victorian churches, St Agnes (JL Pearson 1883) and St Clare (Leonard Stokes 1899).

Liverpool. St George’s Hall is the most magnificent of a group of buildings which are unequalled as a display of potential for variety of classical architecture. Another is the Walker Art Gallery with an outstanding collection of Victorian painting. Explore the architectural riches of the central business district including the former Bank of England (Cockerell 1845) and cast iron Oriel Chambers (1864). Finally Giles Gilbert Scott’s Anglican Cathedral, begun in 1904 so not quite Victorian but the sublime culmination of the Gothic Revival.

Port Sunlight. Cross the River Mersey to Port Sunlight, the exceedingly pretty and superbly appointed township started in 1888 for workers at Lord Leverhulme’s adjacent soap factory. The Lady Lever Art Gallery is outstanding for English painting of the 18th and 19th centuries with masterpieces by Millais, Leighton, Burne Jones and others. Drive to Manchester, reaching Piccadilly Station by 3.30pm.

Rail travel between Leeds and Bradford (return); travel by private coach for transfers and excursions; accommodation as described below; breakfasts and five dinners with wine, water, coffee; all admissions and donations for churches, museums and galleries; all tips; all taxes; the services of the lecturer and tour manager.

All hotels are excellently located within walking distance of much that is seen on the tour and are among the more comfortable hotels in each city; all are rated four-star. The Midland, Manchester: a large elaborately adorned Victorian hotel, recent refurbishment blending something of its original character with modern comforts. Queens Hotel, Leeds: a very comfortable 1930s establishment which has retained Art Deco interiors. Hope Street Hotel, Liverpool: in a salubrious area between the cathedrals, it brings good modern design and comforts into a 19th-century factory and adjacent 1960s police station.

This tour would not be suitable for anyone who has difficulty with everyday walking and who cannot stand for long periods of time. Average distance by coach per day: 25 miles. 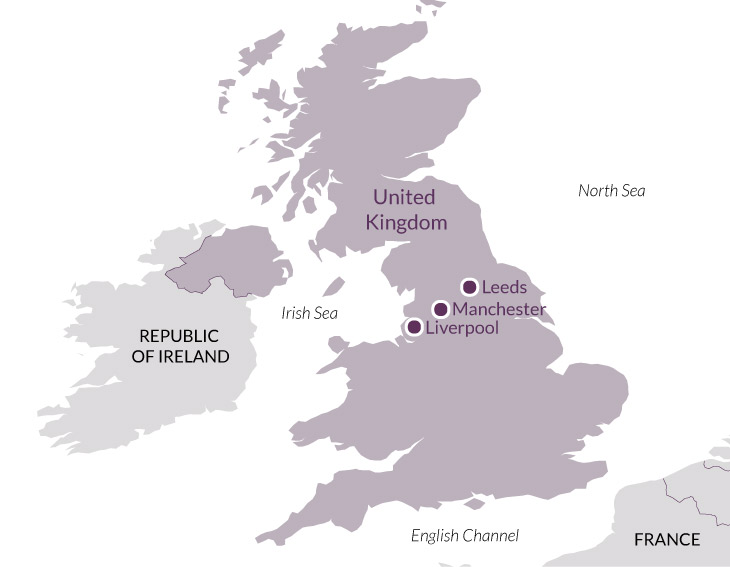 'Our lecturer was a very intellectual, urbane, unruffled guide, and could not be bettered.'

'We had a superb guide and lecturer, often illuminating a familiar area of history or architecture with new light.'

'What an eye opener this tour was! What unexpected riches in these cities – Leeds surprised us most.'