Modern architecture in Tokyo and the contrasting traditional buildings in Shirakawa and Takayama.

Stunning Buddhist temples and gardens in Kyoto, and the legendary, ancient shrine at Izumo.

Traditional arts and crafts in Kanazawa.

An exploration of the Japanese character in history and today, with specialist lectures by Pauline Chakmakjian.

Tour in partnership with the College Art Association.

One of the joys of exploring Japan is discovering its many different facets. It is a country of exquisite ancient beauty, but also at the cutting edge of modern design and creativity. Its people are said to be homogeneous, but nevertheless colourfully different characters constantly stride out both in history – such as Minamoto no Yorimoto, the founder of the shogunate – and today – in the young pink-haired punks and Cosplay followers of Tokyo’s Shibuya. Japan is well known for adapting ideas discovered elsewhere, but it has also always produced art and ideas of wonderful originality.

This tour has been designed to take us to the heart of Japan, to explore the many aspects of the country and its people: its stunning natural beauty and heritage; the continuing work of its crafts-people; art and architecture both old and new; its history and relations with neighbours; and modern Japan and its position in the world.

In the sixth century, Buddhism arrived in Japan from China. Kyoto, founded as the new capital in 794, perfectly displays this history through its gardens and Buddhist temples, many of which are to be found on the hillsides around the city. Even when the seat of power moved to Kamakura and later to Tokyo in 1603, Kyoto remained at the heart of Japan. A visit to an Imperial villa offers a special insight, as does an exploration of the work of Kyoto’s traditional craftspeople.

The long tradition of craft skills is also found in Kanazawa, which is well known for its Kutani pottery, lacquer and gold leaf. It is one of the few cities where tea houses and geisha are still in evidence. In the mountains not far away is Takayama, with its old merchants’ houses, and Shirakawa’s traditional gassho zukuri farmhouses.

At the Meiji Restoration in 1868, the emperor moved from Kyoto to Tokyo and Japan opened its doors to foreigners. The tour takes in Matsue, where Lafcadio Hearn worked on his studies of so-called ‘strange things’ – Japanese ghost stories and superstitions – in 1890, as well as the medieval Matsue castle. Ancient myths tell of the creation of Japan through the story of the sun goddess Amaterasu. When she threw her brother Susanoo out of heaven he came to Izumo, home to the great Shinto shrine, whose origins reach back before the Heian period.

Beginning in Tokyo, where there is an abundance of modern architecture, fashion and design, the tour promises to be a remarkable opportunity to engage with many aspects of this multi-layered country.

Tokyo. The tour begins in Tokyo with lunch in the hotel (international flights from the US or London are not included – see Practicalities). There is an afternoon walk in the dynamic and design-conscious Tokyo Midtown. First of two nights in Tokyo.

Tokyo. Nezu Kaichiro’s collection of Japanese arts is well presented in the eponymous museum, which also has a delightful garden. There is time to explore the Omotesando area, where architecture meets fashion. By contrast, the Asakusa Kannon Temple in shitamachi (literally ‘downtown’) is surrounded by busy street stalls.

Kanazawa. Bullet train to Kanazawa (luggage by road), an attractive city which retains much of its old character. After lunch, visit the Kenrokuen, one of Japan’s finest strolling landscape gardens, and the traditional Seisonkaku villa. Nearby, the D.T. Suzuki Museum, designed by Taniguchi Yoshio, commemorates the ideas of a leading Zen Buddhist philosopher. The circular, glass and steel form of the 21st Century Museum of Contemporary Art is striking. First of two nights in Kanazawa.

Kanazawa. In the Nagamachi area there remain many old samurai houses. Visit the Nomura House, a beautifully restored example. In the afternoon there is a private lacquer maker’s studio visit (by special arrangement). The intriguing Myoryu-ji temple includes hidden tunnels and secret rooms, traps, and a labyrinth of corridors designed as defence for the castle, once standing alongside.

Shirakawa-go, Takayama. Drive through Japan’s central Alps to visit Shirakawa-go, famous for its gassho-zukuri houses with their distinctive thatched roofs, and visit the folk museum. In Takayama, a small town with streets lined with heritage wooden merchant houses, visit Takayama Jinya, the seat of the Edo-period government in the region. Overnight in a ryokan, a traditional Japanese inn (sleeping in futon beds on tatami mats). Overnight Takayama.

Takayama, Matsue. An early morning walk along the Miyagawa river to visit the market and nearby temples before driving to Nagoya Airport. Fly to Izumo (Japan Airlines), arriving mid-afternoon. First of two nights at Matsue, beside Lake Shinji, in an onsen hotel. Onsen are natural hot springs and onsen bathing (optional) is a much-loved Japanese form of relaxation. First of two nights in Matsue.

Izumo, Matsue. Ancient myths about the origin of Japan tell of Izumo and the Izumo Taisha, dating to before the Heian period, as well as the Kamosu and Yaegaki Shrines, which are all dedicated to early gods. Matsue Castle (25 miles from Izumo) is one of the few remaining medieval castles. Lafcadio Hearn, a Victorian writer on Japan, lived in Matsue in 1891 and met his wife Koizumi Setsu there. His home gives a flavour of his life.

Yasugi, Bizen, Kyoto. The Adachi Museum, created by Adachi Zenko in 1980, has a spectacular landscape garden as well as his collection of paintings by Yokoyama Taikan, a leader of the Nihonga school in the 1930s. Drive south, passing Mount Daisen to Bizen, famous for its brownish natural-glaze earthenware pottery, to visit a kiln. First of four nights in Kyoto.

Kyoto. A day in the eastern foothills. Ginkakuji, the temple of the silver pavilion, was built by Ashikaga Yoshimasa in the 15th century. In the Zen temple complex Nanzen-ji there is a famous tiger garden and fine 17th-century painted screens by Kano Tan’yu. Nearby is the intimate sub-temple Konchi-in.

Kyoto. Ryoan-ji’s dry garden is perhaps Kyoto’s most famous stone garden. The large walled temple compound of Daitoku-ji, established in the 14th century, is an important foundation of Japanese Zen Buddhism. Its many sub-temples contain dry landscape gardens; one of the finest (and smallest) is in the Daisen-in. In the afternoon visit Saiho-ji with its enchanting dappled moss garden (subject to confirmation).

Kyoto. Morning excursion to Uji, the location of the last few chapters of The Tale of Genji. The Byodo-in temple was a villa made into a temple by Fujiwara no Yorimichi (of the Heian period power-holding family) in 1052. Its Phoenix Hall appears to spread its wings in front of the lake. Visit traditional crafts studios.

Kyoto. The tour ends after breakfast in Kyoto. Transfers to Osaka Airport or Kyoto Railway station can be organised for onward journeys.

Payment is taken in GBP, pound sterling. The USD exchange rate is applied on the day of payment.

A portion of the proceeds from every trip will support College Art Association and its mission to advance art and design. For more information on CAA and its work: www.collegeart.org.

Domestic air travel with Japan Airlines: Nagoya to Izumo; high-speed rail travel (first class) from Tokyo to Kanazawa; private coach for transfers and excursions; accommodation as described below; breakfasts, 10 lunches and 8 dinners with wine or beer; all admission charges to museums; all tips for waiters, drivers and guides; the services of the lecturer and tour manager.

Transatlantic flights to and from Japan are not included in the price of the tour. We ask that you make your own flight reservation and inform us of the details. Additional nights can be arranged before or after the hotel, on request.

A good level of fitness is essential. Unless you enjoy entirely unimpaired mobility, cope with everyday walking and stair-climbing without difficulty and are reliably sure-footed, this tour is not for you. You may be on your feet for lengthy stretches of time. Uneven ground and irregular paving are standard. Average distance by coach per day: 38 miles. 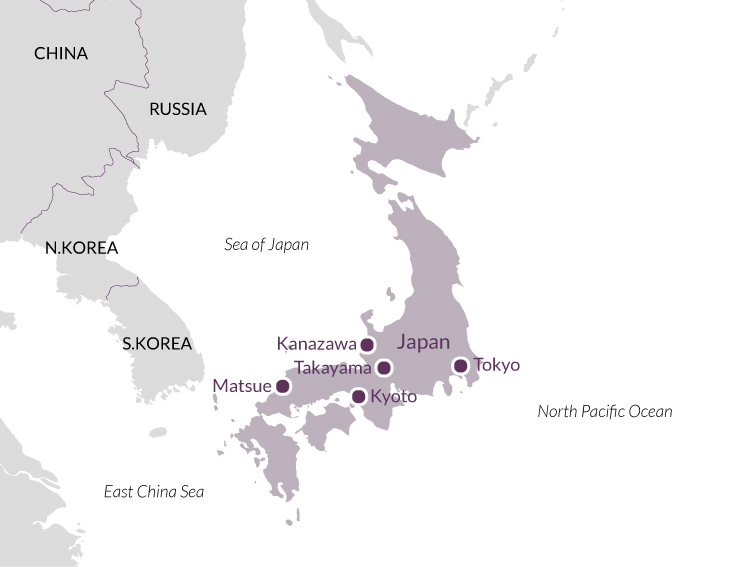