Versailles: Seat of the Sun King - The greatest palace & garden

Focused tour examining the most influential of European palaces and related buildings.

A study not only of art, architecture and gardens but also of history and statecraft.

Includes a performance of the comédie-ballet Le Bourgeois Gentilhomme by Moliére (music by Jean-Baptiste Lully) at the Versailles Opéra Royal.

Versailles was the grandest and most influential palace and garden complex in Europe, and arguably the most lavish and luxurious and most beautifully embellished too.

It was much more than a building to house the monarch, his family and his court. It was conceived as the seat of government when France was at the apogee of her power, and as a structure to demonstrate and magnify the power of Louis XIV, to subdue his subjects and to overawe foreigners. A study of Versailles encompasses not only architectural history and garden history but also political science and the psychology of power.

Built and altered by five French kings, Versailles is several palaces. Even during Louis XIV’s reign elements changed constantly, reflecting not only changes of taste but also political realities as they changed from decade to decade. Indeed, at its core remains a small-scale hunting lodge built by his father (surely meant to be demolished in due course), and apartments were refurbished and parts added right up until the Revolution.

Enlarging the understanding of Versailles and to set it in context there are also visits to the château of Vaux-le-Vicomte, in many ways its inspiration, and to the grounds of Marly-le-Roi, a demolished palace constructed to allow the Sun King to retreat from the formality of Versailles.

Attention is paid to the town of Versailles, first laid out by Louis XIV, as well as to the  park and gardens at Versailles.

Versailles. Leave London St Pancras at c. 8.00am by Eurostar for Paris. Drive to Versailles where all three nights are spent.

Versailles. After circumnavigating the vast palace, spend the morning immersed in the grandeur, the beauty and the symbolism of the King’s and Queen’s apartments, which culminate in the Hall of Mirrors. Explore the gardens, which remain largely as Le Nôtre created them, the parterres, basins and sculpture around the palace and the avenues and canal which seem to stretch to infinity. Then visit the family retreats of Grand Trianon, Petit Trianon and the Domaine de Marie Antoinette. Evening performance at the Opéra Royal (the château’s opera house): Le Bourgeois Gentilhomme (Moliére/Lully).

Vaux-le-Vicomte. The greatest country house and garden complex of its time (1656–61), Vaux-le-Vicomte was built by Nicholas Fouquet, Louis XIV’s finance minister. It is in many ways the predecessor of Versailles, for Louis XIV, after arresting Fouquet for corruption, plundered the property and later employed its chief designers and craftsmen at Versailles. Return to the palace for a guided tour of apartments from the time of Louis XV, characterised by lightness and delicacy and frivolity.

Versailles, Marly-le-Roi, Paris. Morning walk to view the grand approach to the palace and some of the palace’s dependencies in Versailles town. Drive to Marly-le-Roi, Louis XIV’s retreat from the formality of Versailles, which became his favourite residence. No building survives, but the terraced park is evocative. Continue to Paris for the Eurostar arriving at St Pancras at c. 6.30pm.

Rail travel (Standard Premier) by Eurostar from London to Paris; travel by private coach; hotel accommodation as described below; breakfasts, 1 lunch and 2 dinners with wine, water and coffee; all admissions to gardens and châteaux; first category concert ticket; all tips; all taxes; the services of the lecturer and tour manager.

Hôtel Le Louis Versailles Château, a modern 4-star hotel within walking distance of the château. Single rooms are doubles for sole use.

There is a lot of walking and standing around. The gardens cover a large area and paths are often uneven so sure-footedness is essential. You need to lift your luggage on and off the train and wheel it within stations. 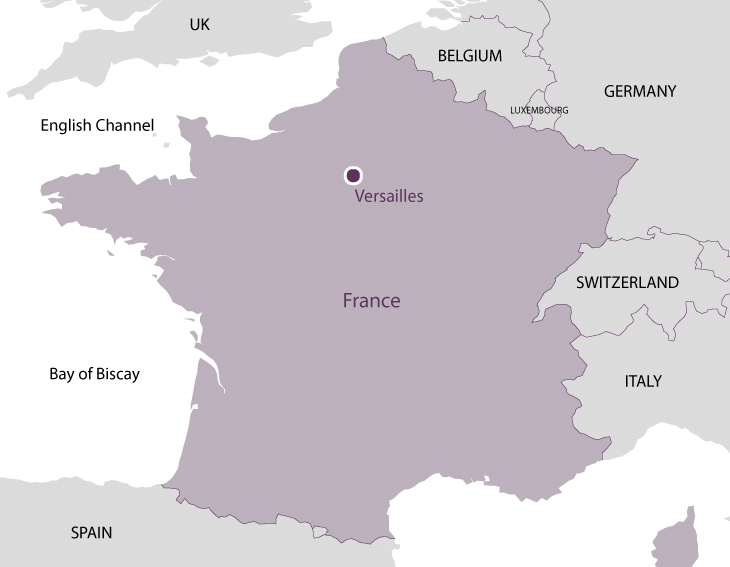 'Of all my many MR trips this one must come near the top of my list – thank you – it was a really wonderful trip.'

'Our lecturer’s knowledge – not just agricultural – added immensely to our tour.'